Polisario Front Police Chief Addah al-Bendir was murdered. And much like the long-simmering dispute between the Front and Morocco, nothing about his death is clear. 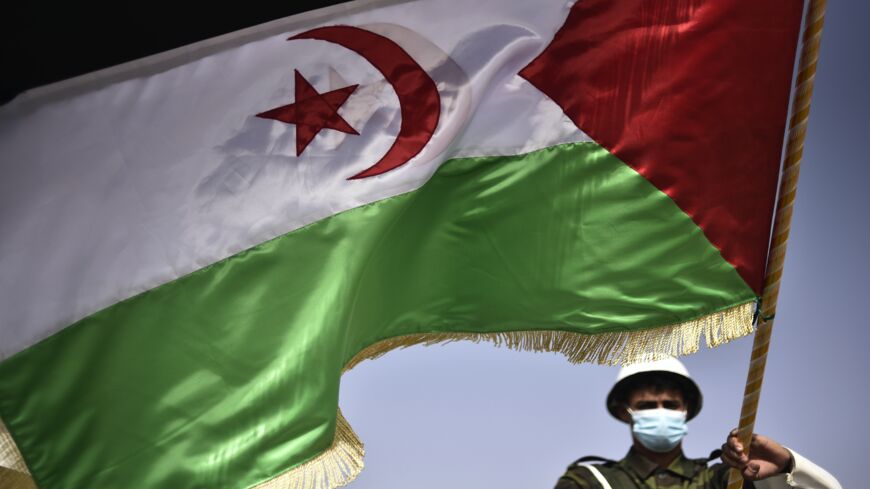 A Sahrawi soldier waves the Polisario Front flag during a parade marking the 45th anniversary of the declaration of the Sahrawi Arab Democratic Republic (SADR), at a refugee camp on the outskirts of the southwestern Algerian city of Tindouf, on Feb. 27, 2021. - RYAD KRAMDI/AFP via Getty Images

The killing of the Polisario Front's police chief, Addah al-Bendir, supposedly by a Moroccan drone in April marked a further test of the uncertain 30-year-old cease-fire between Morocco and the Polisario Front, which has come under increasing strain since November 2020 when an armed dispute over a vital roadway between Morocco and the independence group threatened to turn one of the world's oldest cold wars hot.

Precise details of Bendir's death are hard to pin down, only agreeing that he and an unspecified number of other Polisario officials were killed as a result of a possible Moroccan drone strike to the east of Morocco's 1,700-mile-long sand wall that runs across Western Sahara. Depending on who you believe, he was either retreating after being confronted by Moroccan troops before an attack or returning victorious from a successful strike when the drone struck.

In a further straining of ties, a Spanish court earlier this week summoned Polisario leader Brahim Ghali, who was undergoing medical treatment in Spain, shortly after Moroccan intelligence notified authorities of Ghali's presence in a Spanish hospital.

Like much in the decadeslong dispute between the Polisario Front, Morocco and Algeria, much remains uncertain. Even the number of refugees, or Sahrawi, who have languished in makeshift camps within Algeria since Morocco's Green March of 1975 remains uncertain. Estimations vary, but it's thought that around 173,000 refugees eke out a life under the relatively autonomous control of the Polisario Front. Clustered in desert camps around Tindouf in western Algeria's furthest reaches, 94% of refugee households must rely on foreign aid just to meet the necessities of life. Hunger is an everyday reality for many. With unemployment the norm, jobs are also a premium, with none of the scant pay packets that exist reaching far enough to feed the families they must support.

The camps have been in place since 1975 when, with the territory still nominally a Spanish colony, around 350,000 unarmed Moroccans marched into Western Sahara to claim it for Morocco and their king, Hassan II, shoring up an embattled monarch at home and getting ahead of any competing claim under an earlier accord for the territory and its phosphates from Mauritania. Moreover, it took place just weeks after a UN report found an "overwhelming consensus" in favor of independence among the region's local population. The outcome was a population displaced and decades of war between Morocco, the Polisario Front and, for the first few years at least, Mauritania, which held until the UN-brokered cease-fire in 1991.

Even now, conditions in the camps are desperate. Medical facilities are barely enough to counter the cases of coronavirus that appear to be spiking. According to aid agencies, there are currently around seven hospitals and 30 clinics.

One of them at least, Bendir, was ready to fight for his country's independence. He was 19 years old at the time of Morocco's Green March into Western Sahara, going on to join the Polisario Front three years later. From there, he progressed through the ranks before, according to reports, having been appointed chief of the Polisario's gendarmerie by the time of his death.

Even the manner of his death is uncertain. Officially, Morocco doesn't have any armed drones but is recognized as a regional leader in unarmed drone technology, leading analysts to suggest an unarmed drone may have been used to target Bendir ahead of his ultimate killing by a fighter jet. The Polisario Front, conversely, has accused Morocco of using Israeli-manufactured drones to kill Bendir. Equally, the exact location of Bendir's death is unknown, with initial reports from the Polisario's press agency suggesting Algeria had allowed Bendir to travel through its territory in order to attack the sand wall that Polisario forces have been consistently harrying since the initial escalation last November.

However, after 44 years of stagnation, how much Bendir's death or the Polisario's attacks upon the sand wall might shift public attitudes in Morocco or within the Polisario's host nation, Algeria, is doubtful.

"In Morocco, there is a very strong popular consensus around this issue — Western Sahara is Moroccan and almost nobody dares to challenge it," Riccardo Fabiani, the Crisis Group's project director for North Africa, wrote by email. "It is a convergence of two factors: a status quo that has been in place for almost 50 years and has become normal in the eyes of the population, particularly the younger generations that consider this area as just another region of the kingdom; and strong pressure by the monarchy to ensure that all the main political actors and media outlets accept this policy."

In Algeria, conversely, with the support of the Polisario increasingly being seen by the country's restless youth as a project of the state, support is less certain. "In the Hirak demonstrations, it is very hard to spot any flag of the Polisario de facto state, the Sahrawi Arab Democratic Republic — whereas Palestinian flags, for example, are much more common. It looks like the average Algerian is still committed to the Palestinian cause, while they see the Polisario as yet another policy exclusively supported by the regime," Fabiani wrote.

Trapped between the two, the options for the Polisario are few. Ignored by the international community and with much of the world ignorant of the desperate plight of the Sahrawi refugees, the independence movement's room for maneuver is shrinking. Under these circumstances, Bendir's death is unlikely to lead to any significant escalation. However, what further years of hunger and stagnation may lead to is uncertain.