The events during the month of Ramadan appear to have given birth to more courageous Palestinian youth activists in Jerusalem, who have maintained smiles in the face of arrest. 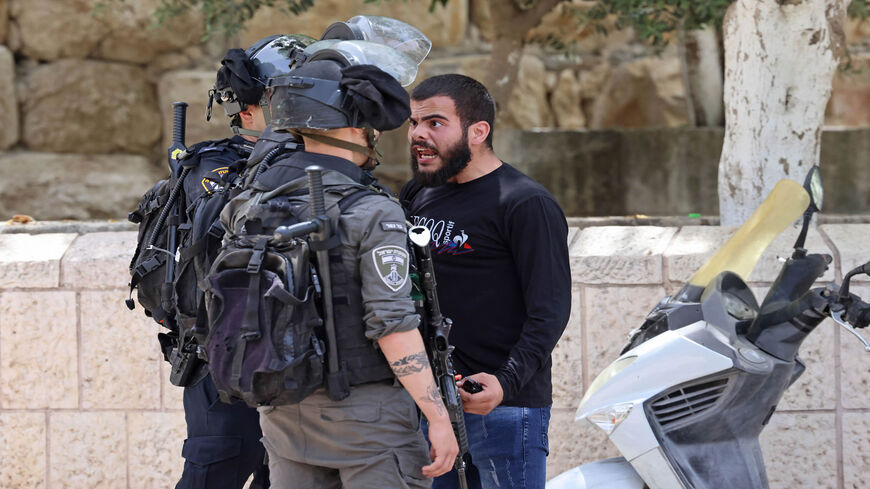 A Palestinian protester argues with Israeli security forces in the Old City of Jerusalem, as a planned march marking Israel's 1967 takeover of the holy city threatened to further inflame tensions, May 10, 2021. - Emmanuel Dunand/AFP via Getty Images

For years, researchers focusing on the city of Jerusalem have been sounding the alarms of the Israelization of Palestinians in the city. But if anything, the last few weeks have shown Palestinians in Jerusalem don't only have a strong national backbone but have totally broken the Israeli deterrence efforts by smashing their own wall of fear.

As the Palestinian leadership in Ramallah is increasingly absent due to Israeli policy and their own incompetence, the leaderless Jerusalemites have developed their own agenda and have bonded even more powerfully with their fellow Palestinian citizens of Israel. Social media and cellphone networking were best exemplified May 8 when scores of buses carrying Palestinians from various cities in Israel were stopped and prevented entry into Jerusalem by the Israelis.

With the holy city some 20 kilometers (12 miles) away, the passengers decided to continue on foot. When their story emerged on social media, hundreds of Jerusalemites jumped in their cars and picked up their supportive brethren. Local restaurants extended invitations to the visiting Palestinians to enjoy their iftar meal at their eateries free of charge.

Some social media accounts and broadcasts, some of which were reportedly censored by the tech giants, also documented the protests throughout Palestine. From Jenin to Nazareth to the Gaza Strip, and from Amman to Rabat to London, protests in support of the Jerusalemites were overwhelming and lifted the spirits of those who had chosen to take on the powerful Israeli army with their bare hands and their extraordinary courage.

Having broken the fear barrier and having destroyed hundreds of cameras that follow their daily moves, especially in the Old City of Jerusalem, Palestinians were able to translate their huge numbers into a political position that forced Israel to cancel the annual anti-Arab rally — Jerusalem Day — held to commemorate Israel’s unification of the city.

One of the more interesting features of the Palestinian protests was the decision of young Palestinians to smile as they were being arrested or attacked by the powerful Israeli security forces. These smiles — recorded on cellphones and distributed widely — reflected a new paradigm of fearless young Palestinians who consider their dignity and freedom more important than the social welfare that the Israelis bestow on the residents of East Jerusalem as part of trying to make them more Israeli.

Fifty-four years after the Israeli occupation and the unilateral annexation of Jerusalem, the city is more divided than it has ever been. This division was physically obvious when the Israelis had to place a huge truck just up the hill from the New Gate in order to prevent all access, as the fortified Israeli security barriers simply were unable to control the large number of Palestinian protesters.

The events in Jerusalem temporarily erased the anger over the cancellation of the Palestinian elections — a decision that ironically was made because East Jerusalemites were not allowed to participate. While experts and activists believe that the real reason was more internal, the Palestinian leadership in Ramallah did not feature much in the events of the holy city. The absence of the Palestinian leadership perhaps played a bigger role in the success of the protests, as the leaderless Jerusalemites acted without the restraint that would have accompanied any effort that was connected to a leadership whose hands are tied by the Israelis.

While Palestinians in Jerusalem felt a strong surge of energy due to the absence of the militarization of the protests, the introduction of the Gaza-based rockets threaten to weaken rather than strengthen the unarmed protests that have brought international solidarity. While many Western powers were calling on Israel to de-escalate, the moment that rockets were fired from the Gaza Strip, the Israeli talking points took over and Western leaders forgot the context and started repeating the phrase, “Israel has the right to defend itself.”

The introduction of Gaza rockets were in part called for by some of the Palestinian demonstrators who were chanting the name of Mohammed al-Deif, head of Hamas’ armed wing, Izz ad-Din al-Qassam Brigades. When the rocket from Gaza was launched toward an uninhabited part of the outskirts of West Jerusalem shouts of adoration were heard from Palestinians.

The Israelis sounded a siren to warn its people in the city to take refuge, which had a strong effect on the ground in East Jerusalem. The only people who ran for cover were the radical Jewish demonstrators and many of the civilian-clothed Israeli intelligence officers who had attempted to infiltrate the Palestinian demonstrators. Israel responded to the firing of the single ineffective rocket that reached the outskirts of the Israeli proclaimed capital.

The city of Jerusalem and its crown jewel — Al-Aqsa Mosque — have proven once again to be the epicenter of the Israeli-Palestinian conflict, and despite Israeli hopes that Palestinians will forget this cause, the new generation of Palestinians in Jerusalem are more confident and courageous, and willing to stand up to the Israeli occupiers in a show of strength that has attracted local and international attention.