The Palestinians of Jerusalem collaborated to keep the protests against Israel’s restrictions at Al-Aqsa Mosque ongoing. 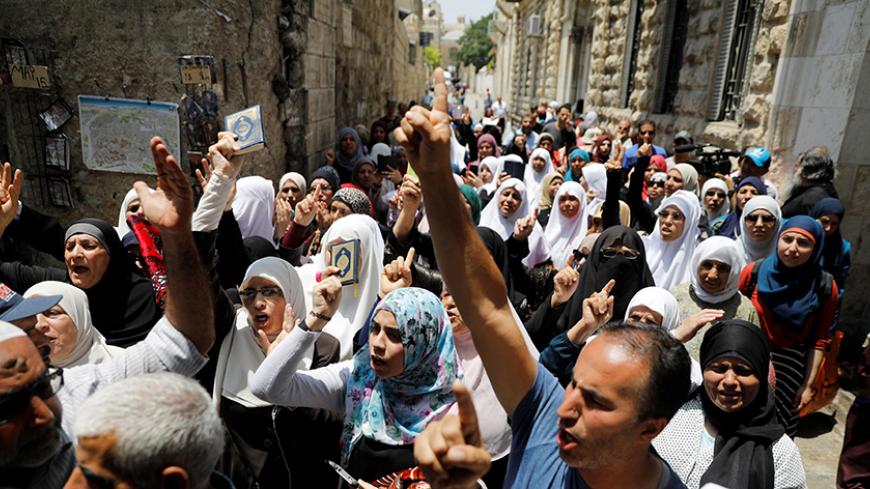 Palestinians shout slogans during a protest over Israel's new security measures at the compound housing Al-Aqsa Mosque, known to Muslims as Noble Sanctuary and to Jews as Temple Mount, in Jerusalem's Old City, July 20, 2017. - REUTERS/Ronen Zvulun

No one expected that the ongoing protests in Jerusalem over the Israeli restrictions placed on the entry to Al-Aqsa Mosque, Islam’s third-holiest site, would become the nucleus of a new movement for Jerusalemites.

Like most popular revolts, it began with a community acting in a defiant way because they could no longer take the humiliation endured on a day-to-day basis. It was a work in progress that quickly found a solution to a pressing problem, which was then implemented.

Mohammed Daraghmeh, a media trainer at Birzeit University and a prominent analyst of Palestinian affairs, wrote in a July 22 post on his Facebook page that what was happening in Jerusalem bore all the hallmarks of a new intifada. “It was a popular movement in that entire families participated in the daily prayers outside the restricted mosque’s gates. People figured out how to deal with highly political issues as well as with basic mundane but necessary issues like food and water, and at the same time were keen on creating rotating committees that took care of the cleaning afterward.”

Having been turned into political orphans, residents of East Jerusalem feel they must rely on themselves and not expect a savior to come to their rescue from the outside.

In the current conflict on access to Al-Aqsa Mosque, the leadership formed to deal with this issue had to come from the religious community. The Islamic Supreme Committee, the office of the mufti of Jerusalem and other religious organizations, along with some respected Jerusalem leaders, were in the forefront issuing statements and providing the moral and philosophical leadership in this crisis.

While the local Islamic leaders made their positions known during the daily protests, the support that was required was provided by young people and local civil society organizations. The nature of the protests meant that as long as the metal detectors were in place outside Al-Aqsa Mosque, all prayers would be carried out as close to the mosque as the faithful were allowed. The five prayers a day became the focus of organized activities, media attention and public support.

Khaleel Assali, a local journalist and editor of the website Akhbar el-Balad, told Al-Monitor that what transpired July 21 in the Old City of Jerusalem and outside the city brought tears to his eyes. “I saw shopkeepers who normally close their shops on Fridays open up their shops and provide youth activists with unlimited supplies of water and other basic essentials. In every neighborhood, local support committees were formed whose job was to organize and provide protesters with water, food and prayer mats and also to clean up the streets.”

According to Assali, Israel’s municipal workers were not present on the ground and the local activists ensured that the tens of thousands who came to pray throughout the city would be able to pray on clean streets.

The clockwork-like activities were prominent in the area outside Bab al-Majles. Al-Monitor visited the area July 20 and noticed the way local youths organized themselves and provided the support needed to keep a prolonged protest movement alive. Plastic chairs were provided for the protesters and visitors to sit on between prayers.

In Bab al-Majles, a small African community — which came to Jerusalem in the 19th century from Chad, Sudan, Niger and Senegal — provided the entire support system for the protesters; cold water and coffee was served regularly. When Al-Monitor was there, freshly picked and peeled cactus fruit was offered. With every round of drink or fruit, a member of the community with a plastic bag went around to pick up empty cups and other litter to keep the area clean.

Mahdi Abdul Hadi, the founder and director of the Palestinian Academic Society for the Study of International Affairs, is one of the few nonreligious leaders who has been invited by the various Islamic committees to attend ad-hoc meetings during which protest-related decisions and relevant statements are made.

Abdul Hadi’s presence and his experience helped in drafting statements and giving political context and direction to the religious leaders. Abdul Hadi, who has excellent relations with the leadership in Ramallah and Amman, Jordan, quickly attracted media attention when he joined the protesters outside Lion’s Gate July 20.

In an impromptu press conference July 20, Abdul Hadi addressed the political and social aspects of the protests. In regard to the role of local leaders, the youth and civil society, Abdul Hadi praised the local initiative that was born in Jerusalem on July 14 when Israelis closed Al-Aqsa Mosque to worshippers. “Despite 50 years of living as political orphans, our people are no longer looking to others to save them but have decided that they must do things themselves.”

As the protests might be slowing down or even ending now that the metal detectors have been removed — as part of a deal between Israel and Jordan reached July 25 — the new leadership that has been formed and the spirit of self-reliance that was born in the past days will be around for years to come and will certainly be the foundation of a local leadership in which Jerusalem is in urgent need.