Kurdish journalists in Iraq criticized after Iranian immolates himself on camera

The asylum seeker from Iran told the Kurdish media outlet Rudaw that he has no work. 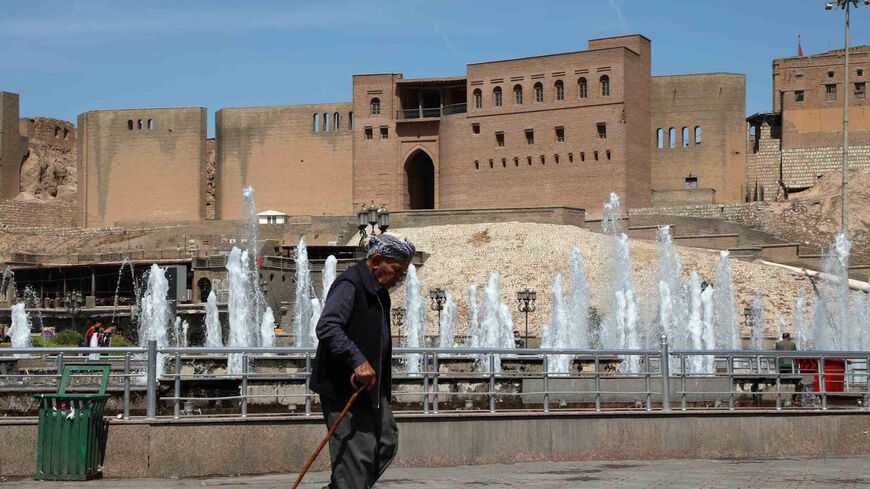 An Iraqi Kurdish man walks past a fountain in front of Arbil's Citadel in the capital of the autonomous Kurdish region in northern Iraq, on April 15, 2021. - SAFIN HAMED/AFP via Getty Images

Journalists in the Kurdistan Region of Iraq were criticized by local authorities and on social media Tuesday after a man they were interviewing set himself on fire.

A man from the western Iranian city of Bukan “carried out an act of self-immolation” in front of the United Nations headquarters in Erbil on Tuesday, the Kurdistan Regional Government (KRG) said in a statement.

Video of the graphic incident posted on Kurdish social media showed the man speaking to reporters from a few media outlets holding a yellow liquid. He then poured the liquid on himself, set himself on fire and ran away from the journalists as the camera continued recording.

The Erbil-based news outlet Rudaw identified the man as Behzad Mahmoudi, a 25-year-old Kurd from Iran. He survived the incident; he told Rudaw that he has no work and money and was dismissed by the UN High Commissioner for Refugees (UNHCR) after asking for help.

The journalists at the scene received criticism on Kurdish social media for documenting an event in which the source was clearly in danger. “In what world do TV presenters interview a man with gasoline in his hand and a lighter, who is threatening to set himself ablaze?” wrote Ruwayda Mustafah on Twitter.

“We strongly condemn the actions of media organisations that covered the brutal incident with no regard for journalistic integrity and ethics nor the Kurdistan Region’s broadcasting laws and guidelines,” the KRG said in the statement.

A spokesperson for the UN Assistance Mission for Iraq declined to comment for this article. UNHCR spokespeople did not immediately respond to Al-Monitor’s request for comment.

Kurds in Iran face repression from the state and poor economic opportunities. Many seek better lives in the relatively stable Kurdistan Region of Iraq.