Clashes between Israeli settlers and Palestinians have occurred several times in the Palestinian territory this year. 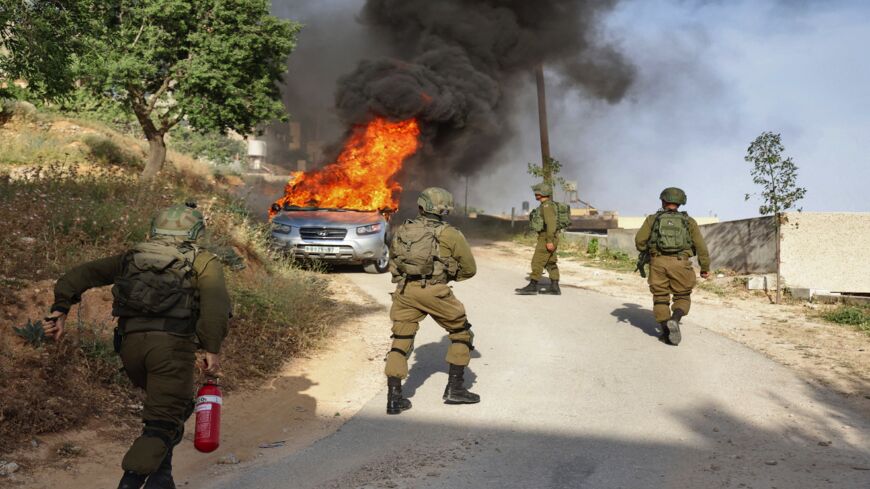 An Israeli soldier tries to extinguish flames in a burning Palestinian vehicle during a security operation in the village of Aqraba, east of Nablus in the occupied West Bank, on May 3, 2021. The vehicle is suspected to have been used in a drive-by shooting of Israelis the previous day at a bus station at Tapuah junction south of Nablus. - JAAFAR ASHTIYEH/AFP via Getty Images

A group of Israeli settlers attacked a Palestinian man in the West Bank today, according to Palestinian officials.

The attack took place around noon local time in the town of Far’ata west of the Palestinian city Nablus in the central West Bank. A group of settlers from the nearby Havat Gilad outpost allegedly physically assaulted Mohammad Salman while he was grazing livestock on his property. He went to the hospital due to injuries, the Palestinian Authority’s official WAFA News Agency reported.

Havat Gilad is one of several informal outposts in the West Bank that are not recognized by the Israeli government. They are often inhabited by Jewish religious nationalists.

The Israel Defense Forces did not comment on the Far’ata incident.

The assault followed two violent incidents in the Palestinian territory yesterday. Gunmen driving a car with a Palestinian license plate opened fire on a group of Israelis at a traffic junction, injuring three of them. No group has claimed responsibility for the attack. In a separate event, Israeli soldiers shot a Palestinian woman who took out a knife and charged toward them against their warnings at another junction, according to The Associated Press. The shooting victims were students at a Jewish religious school, Israeli media outlets reported.

On Monday, the Palestinian news outlet QudsN published a video of the car purportedly used in the shooting being burned upon its discovery.

Clashes between Israelis and Palestinians are common in the West Bank, and there have been several incidents this year already. In March, Israeli soldiers shot a Palestinian man who allegedly tried to stab them. Israeli and Palestinian officials often describe the events differently.