Flags were lowered to half-staff in Israel on May 2, as the country honored the 45 people who perished in the Mount Meron stampede on April 30. 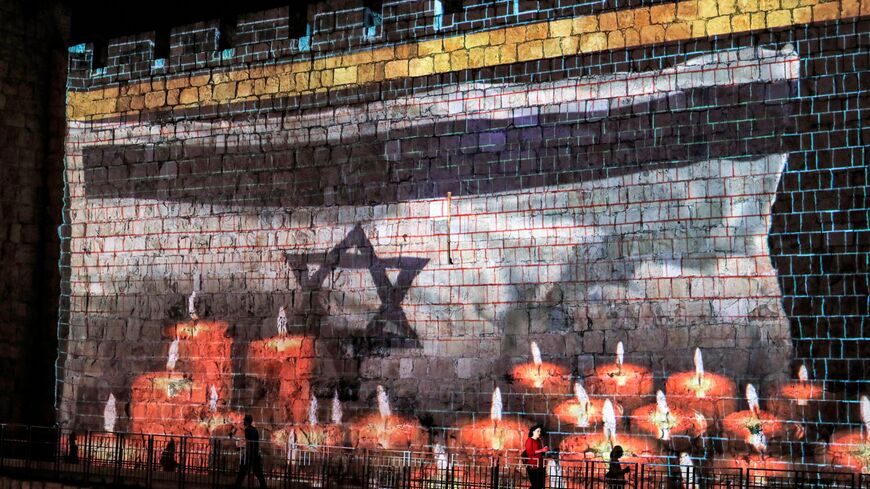 A projection of an Israeli flag flying before lit candles is displayed on the Old City walls of Jerusalem, as Israel declares a national day of mourning for victims of a stampede during the Lag Ba'Omer holiday at Mount Meron, May 2, 2021, - Ahmad Gharabli/AFP via Getty Images

Israel marked a national day of mourning on May 2, honoring the 45 people who perished early on April 30 in a stampede on Mount Meron. The tragedy happened during the Lag Ba'Omer religious festivities, in the country’s deadliest-ever civilian disaster. Among the dead were over a dozen children and teenagers. Victims include Israelis and also nationals from the United States, Canada and Argentina.

More than 100,000 people had attended the annual Lag Ba'Omer gathering, which traditionally includes visits to the graveside of sage Rabbi Shimon Bar Yochai on Mount Meron and massive bonfires on the mountainside. Police is currently investigating the circumstances of the tragedy.

Prime Minister Benjamin Netanyahu had declared a day of mourning during a visit to the scene on April 30, after the victims and the wounded were evacuated. On May 2, he visited the injured at the Rambam Hospital in Haifa.

In a sign of mourning, flags were lowered to half-staff at the Knesset, at President Reuven Rivlin’s official residence and at Israeli embassies across the globe. Special memorial ceremonies were conducted at the Knesset and army bases. Concerts and sports events were postponed.

During his visit May 2 to the Institute for Forensic Medicine at Abu Kabir, Rivlin acknowledged the pressure and difficulties in rapidly identifying the victims. Jewish tradition calls for burying the dead as soon as possible. Still, with so many victims, not all could be identified immediately in order to be buried on Friday, before the Sabbath commenced. Some of the victims were buried the same day, while others were buried on Saturday night, after the Sabbath ended.

Rivlin said, "It is hard to grasp the pain of the families who during the Sabbath did not know the fate of their loved ones [as identification of the bodies and funerals were halted]. The institute’s staff understood the tremendous sensitivity of any delays in burials, for which we gratefully thank them. … I call on medical, rescue, emergency and pathology teams and volunteers: If you were part of dealing with this awful tragedy, take the time to process this traumatic experience and to recover from it."

Israel received condolence messages from many world leaders, including Palestinian President Mahmoud Abbas, and several Arab countries. The Foreign Ministry said it had also received condolences from countries with which Israel does not have diplomatic ties. In a letter to Rivlin, Abbas expressed his sorrow “for the tragedy that claimed the lives of dozens of victims.” He added, “We are praying for the victims and hope for the recovery of those injured.”