An Israeli plane loaded with medical aid arrived to India this morning and others will soon follow. 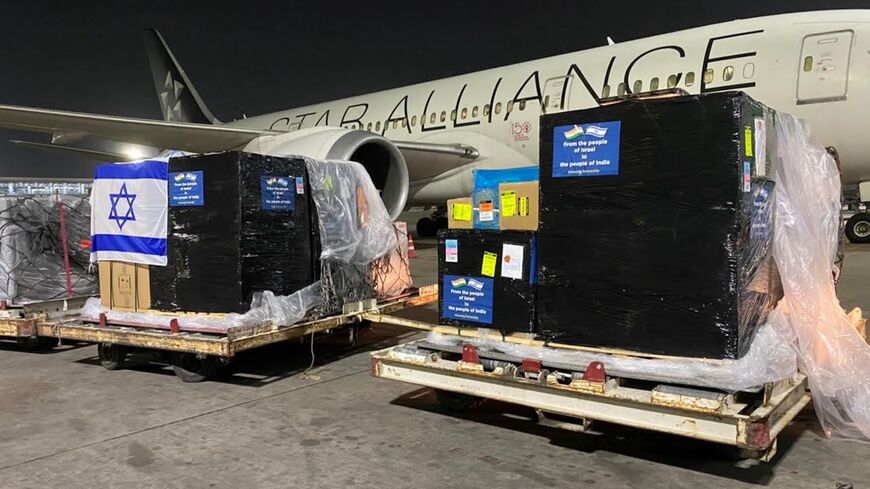 Medical equipment from Israel arrives at the Indira airport in India, May 5, 2021. - Israeli Foreign Ministry

Israel began to send emergency medical aid to India yesterday to help fight the world's biggest COVID-19 surge. The Foreign Ministry tweeted this morning, "We are delighted that the first shipment containing oxygen generators and concentrators sent from Israel last night has now arrived in India. Israel is committed to helping our precious friend India to win this battle against COVID-19. Israel stands with India."

Foreign Minister Gabi Ashkenazi said Tuesday, "The extension of emergency assistance is an expression of the deep friendship between our countries in India’s time of need." Ashkenazi said that India is one of Israel's most important allies, adding that the two countries "share strategic ties that span a wide range of political, security and economic issues."

This morning's shipment is a first in a series of flights expected to arrive to New Delhi’s Indira airport in the coming days. The Foreign Ministry has been working on coordinating the airlift ever since news emerged about the pandemic worsening in India. The Finance Ministry, the Health Ministry, the Israel-India Chamber of Commerce, the Israel Manufacturers Association and the Israel Export Institute all joined the effort. The nongovernmental organization Startup Nation Central called upon Israeli high-tech companies to donate and received many positive responses.

Israel has sent medical equipment to several countries over the past year. Last June Israel sent medical supplies to the Philippines, including tens of thousands of sets of protective gear. On April 6, Israel donated medical equipment to the Jos University Teaching Hospital in Nigeria. On April 15, the Israeli Embassy in Nepal offered the National Trauma Center of NAMS several patient monitors. On April 27, a delegation from the Tel Aviv Sheba Hospital Center went to Uruguay to share information and experience in battling the pandemic.

Israel actually started assisting India last year, and the supplies have gone far beyond the traditional masks and protection gear offered to other countries. In August, Israel donated equipment to the All India Institute of Medical Sciences in New Delhi, one of the country's leading hospitals. The shipment included sensory systems that can treat patients remotely and reduce the risk of transmission to medical staff, coordination systems for faster communication and advanced medical systems using artificial intelligence technology.

"We're happy to share the best of Israel's medical technology with the leading medical institute in India. The mutual support between India and Israel in combating the coronavirus pandemic is a reflection of the brave friendship that has been developing between the countries and even strengthening during the pandemic," said Israel’s ambassador to India, Ron Malka.

Since the outbreak of the pandemic, Prime Minister Benjamin Netanyahu has spoken several times on the phone with India's Prime Minister Narendra Modi about cooperating against the virus. During the first days of the pandemic, India assisted in locating and returning home thousands of Israeli backpackers who were scattered across the country.

Netanyahu has developed close ties with Modi, whom he considers a friend and an ally. Large arms deals agreed upon in recent years and the $1 billion Phalcon AWAKS megadeal being advanced now have cemented the strategic alliance between the two countries. The medical assistance paints a picture of friendship that goes beyond politics and strategy.