The Iran-Iraq border has recently witnessed a fresh uptick in cross-border attacks by Kurdish armed groups fighting for autonomy. 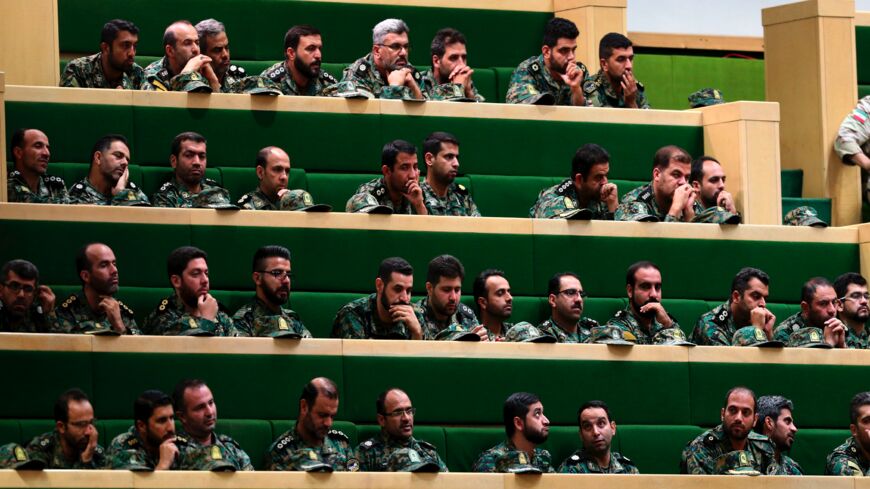 Members of the Iranian Revolutionary Guard Corps listen to a speech in parliament in Tehran on Oct. 7, 2018, about a bill to counter terrorist financing. - ATTA KENARE/AFP via Getty Images

Iran's Islamic Revolutionary Guard Corps (IRGC) said one of its members was "martyred" during intense clashes with Kurdish fighters near the border with Iraq early on May 4. The IRGC claimed to have inflicted heavy losses on the infiltrating militants but did not release casualty figures.

The clashes took place in the mountainous area of Dara Nakhi, near the Kurdish town of Mariwan close to the Iraqi border. The IRGC identified the Kurdish attackers as "armed gangs" and "counter-revolutionary elements," monikers Iranian authorities routinely apply to Kurdish groups struggling for autonomy. Most of those fighters are based in a rugged mountainous range stretched on the long Iran-Iraq border.

Over the past four decades, Iranian Kurdish groups have led their own cause for varying levels of autonomy in an armed struggle against the Islamic Republic. They recently intensified their hit-and-run skirmishes. On April 22, the IRGC confirmed that two of its members were killed in similar clashes near the same town of Mariwan. The violence, according to a local commander, "once again disclosed to the local Kurds the malicious nature" of those groups.

Earlier in April, Osman Haj Hosseini, a veteran IRGC commander in the town of Piranshahr, was gunned down in his car. A wing of the Kurdistan Democratic Party of Iran claimed responsibility for the killing, according to Hengaw, which is an opposition news outlet monitoring developments in Iranian Kurdistan.

In past instances of an upsurge in clashes between the two sides, the IRGC has expanded its operations by pounding border villages, where civilian casualties have been reported.

Since the 1979 Iranian Revolution, an unspecified number of young Kurds have joined the ranks of the armed groups. Iranian Kurdistan is one of Iran's most impoverished regions, plagued by alarming unemployment rates that have coupled with the state-led persecution of opponents to push disillusioned locals into mountains for an armed struggle.

Yet the IRGC's battle against dissidents in Iranian Kurdistan has not been confined to the military level. Imposing a securitized atmosphere in the region, the IRGC's Intelligence Organization has upped its surveillance of and crackdown on young Kurds engaged in civilian and nonpolitical activities.

Local campaigners, charities and advocacy groups, and most notably environmentalists have been particularly targeted as the IRGC intelligence apparatus has grown increasingly suspicious and wary of them, claiming such causes are used as cover for a wider political agenda.

In the past two years, the IRGC has carried out various raids and mass arrests, especially in the city of Sanandaj, holding nonpolitical campaigners incommunicado for months. One of the environmentalist groups, Chia, has been disorientated amid the arrest of one member after another.

In its crackdown, the IRGC has ignored the authorization granted to the group by the Iranian Department for Environment. In 2014, the same activists were officially honored by environment authorities for their dedicated struggle against deforestation and illegal poaching, and most notably for their campaign encouraging the local population to "smash hunting guns."