Intel: US reaches out to Egypt over Israel-Palestine violence

The Egyptians may talk Hamas off the ledge, but both the Israeli prime minister and the Palestinian militants may stand to politically benefit from a prolonged conflict. 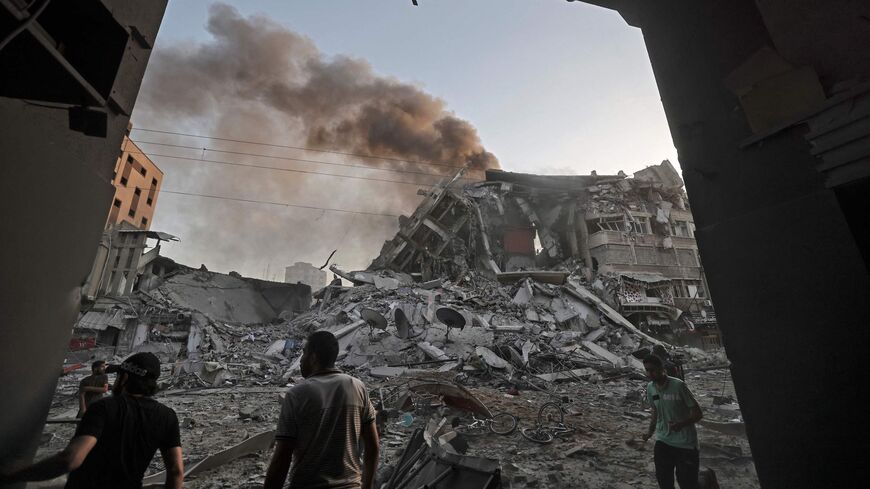 People gather amid the rubble in front of Al-Sharouk tower, which collapsed after being hit by an Israeli airstrike, in Gaza City, May 12, 2021. - MOHAMMED ABED/AFP via Getty Images

US national security adviser Jake Sullivan spoke to Egyptian government officials yesterday about the recent burst of violence between Israel and Palestinian militant groups in Gaza.

“They discussed steps to restore calm over the coming days and agreed to stay in close touch,” a statement by the US National Security Council read. It did not name the Egyptian officials.

The call came the same day as Sullivan spoke with Israel’s national security adviser Meir Ben Shabbat to condemn Hamas’ rocket attacks on Israel and pledge “unwavering support for Israel’s security and for its legitimate right to defend itself and its people, while protecting civilians.”

Why it matters:  Egyptian officials typically negotiate cease-fires between Hamas and Israel.

The phone call appears to be the US administration’s first tangible effort to resolve the violence, which escalated rapidly on Monday when Hamas and the Palestinian Islamic Jihad fired more than a thousand rockets deep into Israel, drawing swift retaliation from the Israel Defense Forces.

The administration of President Joe Biden is taking heat for its tepid response to the latest outbreak of conflict.

The warning signs were visible for weeks. Violent street altercations rocked Jerusalem as Israeli settlers advanced a legal maneuver to remove Palestinian families from their homes in the east Jerusalem neighborhood of Sheikh Jarrah.

Last week, Israeli forces shot two Palestinians dead near Jenin in the West Bank in what the IDF said was an attack on its forces. The dam broke on Monday after Israeli police raided the Al-Aqsa Mosque complex in response to stone-throwers, reportedly injuring more than 300 Palestinians in the process.

What’s next:  It’s not clear whether Hamas' or Prime Minister Benjamin Netanyahu’s governments have the political will to stop the fighting just yet.

Netanyahu is facing a political challenge from a coalition of various opposition parties, whose political differences on the conflict may well widen as it goes on.

The IDF said Wednesday it had killed a senior Hamas commander in Gaza airstrikes just a day after it announced the killing of the top rocket expert of the Palestinian Islamic Jihad.

Know more:  Ben Caspit explores how Hamas and Netanyahu stand to politically benefit from a renewed conflict, while Daoud Kuttab relates how a new generation of Palestinian activists are facing the increasing Israelization of Jerusalem.