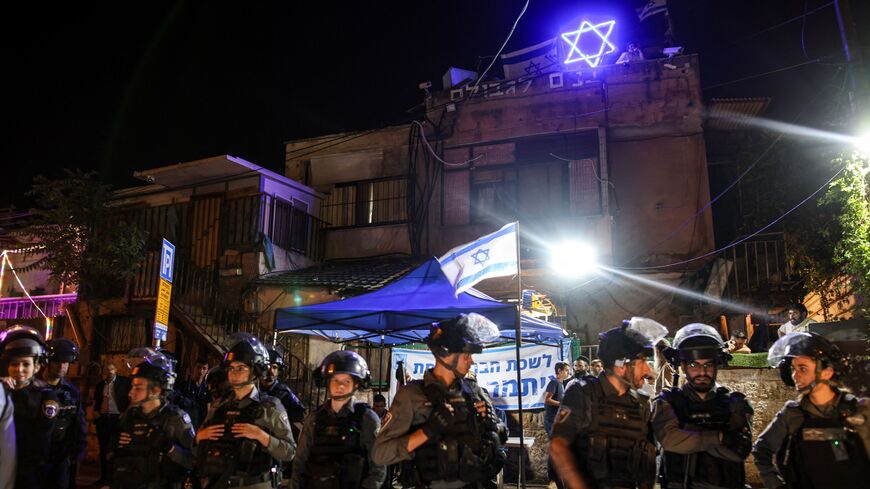 Israeli border guards stand guard by a house decorated with the Star of David and an Israeli flag, in front of which Israeli Knesset member Itamar Ben-Gvir of the Jewish Power (Otzma Yehudit) party has set up a makeshift legislative office, in the Sheikh Jarrah neighborhood of Israeli-annexed east Jerusalem on May 6, 2021. There have been confrontations between Israeli security and Palestinian demonstrators backing Palestinian families facing eviction as part of an ongoing effort by Jewish Israelis to take control of homes in the neighborhood. - AHMAD GHARABLI/AFP via Getty Images

Courts and the law
EU-Mideast ties
Israeli-Palestinian conflict
Settlements
May 6, 2021

The governments of France, Germany, Italy, Spain and the United Kingdom are urging Israel to call off plans to construct more Jewish settlements in the occupied West Bank.

"We urge the government of Israel to reverse its decision to advance the construction of 540 settlement units in the Har Homa E area of the occupied West Bank, and to cease its policy of settlement expansion across the Occupied Palestinian Territories," the foreign ministries of the five European countries said in a joint statement on Thursday.

They warned the move “will cause further damage to the prospects for a viable Palestinian State” and “undermines efforts to rebuild trust between the parties, following the positive resumption of Israeli-Palestinian cooperation.”

Iran has given the green light for a 540-unit development beyond the Green Line in Har Homa, a neighborhood situated between East Jerusalem and the West Bank city of Bethlehem. Israel has also awarded contracts for some 1,200 housing units in the nearby Jewish neighborhood of Givat Hamatos.

The Palestinians envision the Gaza Strip and West Bank as part of a future state, with East Jerusalem as its capital. More than 440,000 Jewish settlers currently live in the West Bank on territory captured by Israel in the 1967 war.

Most of the international community views the settlements as a violation of international law that threaten the chances of a two-state solution to the Palestinian-Israeli conflict.

“We call on both sides to refrain from any unilateral action and resume a credible and meaningful dialogue, to advance efforts for the two state solution and an end to the conflict,” the European countries said.

The statement also raised concern over the displacement of Palestinians from East Jerusalem’s Sheikh Jarrah neighborhood. In a win for pro-settler organizations, an Israeli court approved the eviction of 13 Palestinian families from their homes. The Supreme Court is expected to decide this week whether to allow an appeal.

Tensions in Sheikh Jarrah are running high, with a number of Palestinians injured or arrested this week during clashes with the Israeli police.