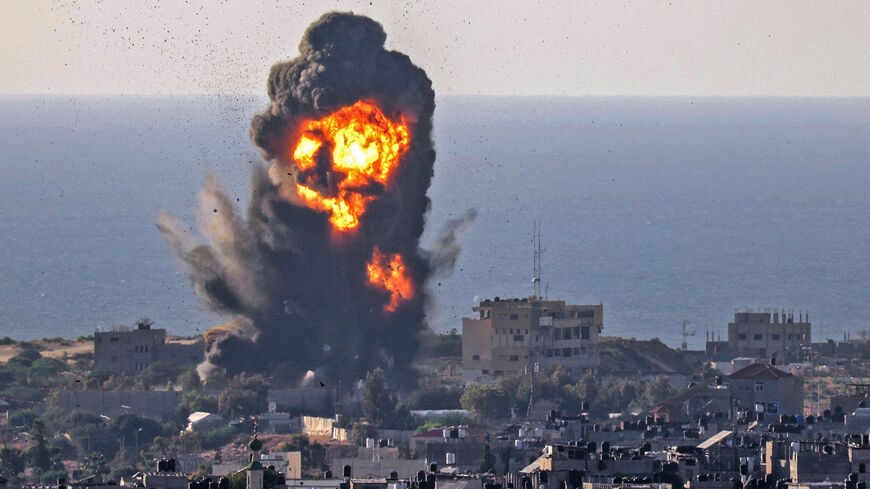 Smoke billows from an explosion following an Israeli airstrike in Rafah in the southern Gaza Strip on May 13, 2021. - SAID KHATIB/AFP via Getty Images

Turkish President Recep Tayyip Erdogan said Friday that Ankara is “furious” over Israeli airstrikes in the Gaza Strip and lashed out at countries that “remain silent” in the face of Israel’s operation.

“We are both saddened and furious at the cruelty of the terrorist state of Israel against Palestinians,” Erdogan told a virtual meeting of his ruling Justice and Development Party.

“To stand against Israel’s aggression in Palestinian cities, Jerusalem is a duty of honor for humanity,” he said. "By attacking the sacred sites of all three religions, terror state Israel has crossed all boundaries.”

Casualties mounted as the violence between Israel and Hamas entered its fifth day. The bloodshed is the worst the region has seen since the 2014 war, prompting the UN’s Middle East envoy to warn the conflict is “escalating toward a full-scale war.”

At least 122 people, including 31 children and 20 women, have been killed by Israeli airstrikes in the Gaza Strip since Monday, Palestinian officials say. Eight people in Israel, including two children, have died in the rockets launched by Hamas and the Islamic Jihad militant group, according to Israeli officials.

Erdogan’s vocal criticism of Israel’s recent military actions comes despite Ankara’s efforts to mend relations with the Jewish state, which has included meetings between Israeli and Turkish intelligence officials.

“Those who remain silent or openly back Israel’s bloodshed should know one day it will be their turn,” Erdogan said Friday, calling on the UN Security Council to resolve the crisis.

The 15-member body is meeting on Sunday to discuss the spiraling violence in Gaza and Israel. Earlier this week, the United States blocked a Security Council statement expressing concern over the hostilities, which the US delegation reportedly felt was counterproductive.

Meanwhile, Turks have taken to the streets in protest over Israel’s bombing campaign and crackdown on protesters. On Monday, thousands flouted Turkey’s coronavirus lockdown to demonstrate outside of the Israeli Embassy in Ankara and the consulate in Istanbul.