Egyptian-Chinese cooperation is growing, most recently evidenced by an agreement to teach the Chinese language in Egyptian schools. 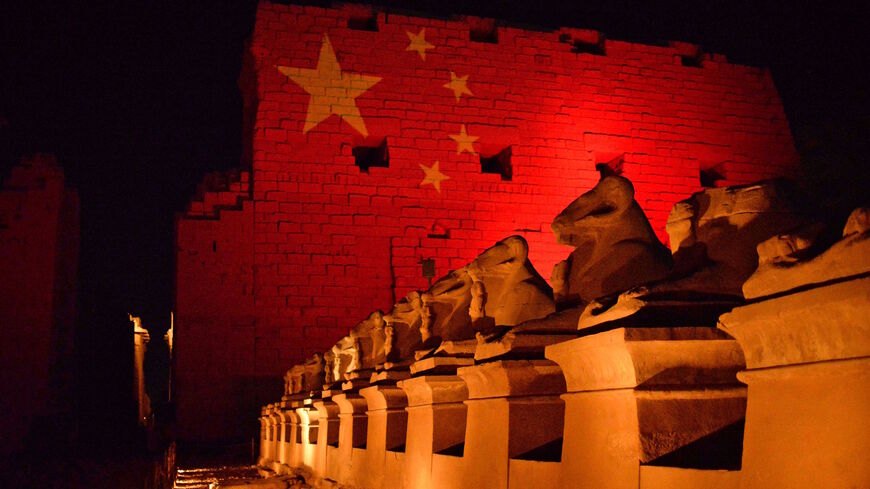 The Karnak Temple in Upper Egypt's ancient city of Luxor is pictured on March 1, 2020, with the Chinese flag in solidarity with the Chinese people amidst a world outbreak of COVID-19. - AFP via Getty Images

CAIRO — Egypt and China have recently been working together to increase cooperation in various fields. On May 17, the Egyptian Ministry of Education announced that starting in 2022, a number of Egyptian public schools will teach Chinese as an optional foreign language.

The announcement came during a virtual meeting between Egypt’s Education Minister Tarek Shawki and China’s ambassador to Egypt to discuss joint educational projects between the two countries.

According to a statement by the Ministry of Education, the two officials discussed the enrollment of students at the Egypt Luban Workshop in cooperation with Tianjin Light Industry Vocational Technical College and Tianjin Transportation Vocational College, as part of efforts to promote technical education. The discussions also touched on cooperation with China’s NetDragon, which develops and operates online games, as part of a project to resolve the problem of overcrowded classrooms.

Two Luban workshops were inaugurated at Egypt’s Ain Shams University in November 2020 in cooperation with the Chinese universities of Tianjin. These workshops provide vocational training for students as part of China’s efforts to boost international cooperation in the education sector.

In this context, Muhammad Mujahid, deputy minister of education for technical education affairs, told Al-Monitor via phone, “There is continuous cooperation with the Chinese side in the education sector. The Ministry of Education is currently working on the completion of two projects in cooperation with Chinese parties. The first is related to the implementation of the Egypt Luban Workshop, which we started discussing in 2019. The project aims to open a modern workshop on the smart manufacturing and maintenance of modern automotive.”

“Egyptian students will be enrolled in the Egypt-Luban Workshop as part of a Chinese program starting in September 2022,” he explained.

Mujahid added, “We will ask students who attend this advanced workshop to learn Chinese alongside their own courses, which will give them access to more job opportunities. Once graduated, students who speak Chinese will have access to more jobs in Chinese firms and will get double the salary of someone who does not speak the language.”

He continued, “The second cooperation project seeks to promote vocational education in three schools in Luxor to provide students with advanced curricula that meet the requirements of the labor market.”

He believes the projects with China "will increase employment opportunities, open a new market to the graduates and provide jobs in modern fields.”

Commenting on the Chinese language courses in Egypt, Assem Hegazy, assistant professor at the Faculty of Graduate Studies for Education at Cairo University, told Al-Monitor, “Teaching the Chinese language in Egyptian schools aims primarily to open new horizons for cooperation between the Egyptian and Chinese peoples. That is added to the cultural and economic exchange.”

He added, “China is a major economic world power with which we need to strengthen cooperation in the coming years. This is why it is important to promote education in supporting all sectors, whether commercial, industrial or agricultural.”

Hegazy explained that “the education process is no longer separate from the state's economic reality. Vocational education programs and teaching the Chinese language in Egypt will contribute to the implementation of important economic and investment projects that will benefit the Egyptian economy and create jobs in the latest technology fields.”

According to data released by the Chinese Ministry of Commerce in April, trade exchange between China and Egypt increased by 10.34% yearly, reaching $14.56 billion in 2020. The data also showed that Beijing is Cairo's largest Arab trade partner, and that as of December 2020, Egypt has become China's 49th top trade partner.

Hegazy says it won’t be difficult for Egyptians to learn Chinese, noting, “The human brain is able to learn at any age. There will be an appropriate strategy that helps students master the Chinese language easily and practice the language with Chinese experts in Egypt.”

In parallel, Mohamed Elkoosy, executive director of the Egyptian Space Agency, spoke to Egypt Channel 1 on May 17 about the latest developments regarding the MisrSat-2 satellite project that is being implemented in cooperation with China.

He described the project as “the result of the distinguished relations between Egypt and China, be they at the presidential or grassroots level.”

He explained that “the good relations with China resulted in Beijing providing a grant for the manufacture of the MisrSat-2 satellite in September 2019.”

Elkoosy said the MisrSat-2 satellite is scheduled to be launched into space in September 2022, and the satellite will send images and data that Egypt will use in urban planning and in finding water underground and minerals in the upper layer of Earth. The satellite will also help monitor trespassing upon agricultural lands or state property, and weather conditions and disaster relief so as to achieve the Egyptian government's sustainable development strategy, he added.

China in the Mideast
Education