50 Gaza schools damaged in Israeli strikes, Save The Children says

Amid the heavy fighting, schools remain closed in Gaza and southern Israel “putting education out of reach for hundreds of thousands of children." 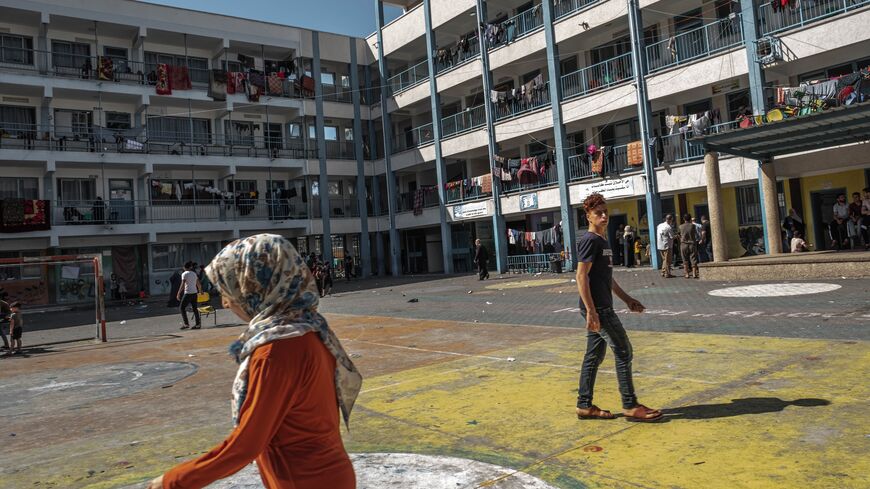 Palestinian children play in a UN relief agency school in Gaza City, Gaza, where some families are now living following Israeli raids on the northern city of Beit Hanoun in northern Gaza, on May 19, 2021. Many families have hung their clothes out to dry at the school. - Fatima Shbair/Getty Images

Fifty schools in the Gaza Strip have been damaged by Israel’s aerial bombardment of the Palestinian enclave, Save The Children said Wednesday.

Nearly 42,000 Palestinian children are impacted by damage to their schools, the international aid organization said in a statement. For more than a week, Israeli warplanes have pounded Gaza, targeting Hamas commanders and tunnels dug by the militants.

At least 227 Palestinians have died in Israeli strikes, including 64 children, officials in Gaza said Wednesday. The rockets fired at civilian areas in Israel have killed at least 12 people, including two children, Israeli authorities said.

“The loss of one child's life to conflict is one too many,” said Jason Lee, Save The Children’s Palestine country director. “This is an abdication of moral and legal responsibility."

The airstrikes have displaced tens of thousands of people in Gaza whose homes were destroyed or who lost access to electricity and sanitation. The UN agency for Palestinian refugees, UNRWA, said Tuesday most of the 47,000 people forced to flee are taking shelter in Gaza schools.

Schools are closed in both Gaza and southern Israel, “putting education out of reach for hundreds of thousands of children,” Save the Children said.

Hamas, which rules the Gaza Strip, and the smaller Islamic Jihad group continue to launch rockets into Israel, most of which have been intercepted by the Iron Dome missile defense system. Thousands have been fired. UNICEF, the United Nations’ children’s agency, said it has received reports of at least three Israeli schools that were damaged by the rockets from Gaza.

“The brutal truth is that no child is left unscathed and time and time again we see that children's lives are the hardest hit by conflict,” said Lee. “With every school that is damaged or destroyed, children's prospects of experiencing and building a better future diminish.”