The USS Eisenhower arrives in the Gulf region as the Biden administration kicks off indirect talks with Iran over its nuclear program. 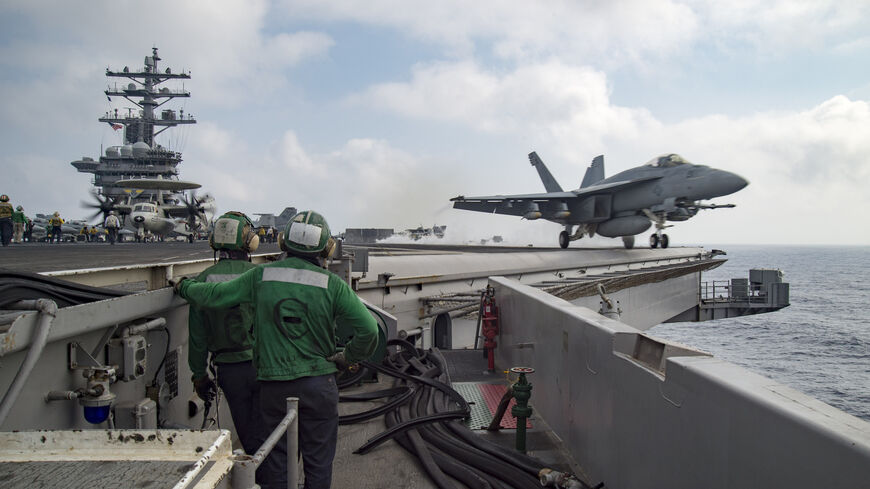 In this handout provided by the US Navy, an F/A-18E Super Hornet assigned to the Sidewinders of Strike Fighter Squadron (VFA) 86 launches from the flight deck of the aircraft carrier USS Dwight D. Eisenhower (CVN 69) on June 28, 2016, in the Mediterranean Sea. - Anderson W. Branch/U.S. Navy via Getty Images

The USS Dwight D. Eisenhower aircraft carrier and accompanying destroyers passed through the Suez Canal on Saturday following a weeklong stoppage of traffic through the vital thoroughfare caused by a stuck container ship.

The Eisenhower approached Port Said late last week following Egypt’s announcement that the stuck ship, the MV Ever Given, had been dislodged from its location near the canal’s southern mouth on the Red Sea.

The US carrier is likely to take command of the US Navy-led Task Force 50 in the Gulf region. The French carrier Charles de Gaulle took command of the task force at Washington’s request late last month, according to Naval News.

Its entry into Middle Eastern waters marks the first US carrier strike group presence in the region since January when US Secretary of Defense Lloyd Austin sent the USS Nimitz home after an extended deployment to the region amid threats from Iranian leaders.

“They’re there to support a myriad of tasking that [CENTCOM commander] Gen. [Kenneth] McKenzie might have for them there,” Pentagon press secretary John Kirby told reporters on Monday.

McKenzie, head of US military forces in the Middle East, has pushed for resources from the Pentagon to sustain a show of force in the region to deter Iran from launching attacks on US personnel and partner nations in recent months.

McKenzie has touted what he calls a state of “contested deterrence” — namely that Iran has refrained from launching direct attacks on US personnel and partners in the region for fear of retaliation, but that attacks by Tehran-backed militias in the region remain less predictable.

Yet successes of the CENTCOM commander's approach remain difficult to discern, and the method has been criticized for excessively straining the US Navy’s carriers and their crews. The Ike’s deployment follows more than 200 consecutive days at sea last year due to the COVID-19 pandemic.

In recent months, ballistic missiles and explosive drone attacks on Saudi Arabia by Yemen’s Iran-backed Houthi rebels have ticked up as the Biden administration has diplomatically pushed to end Yemen’s civil war.

The conflict, which the UN has called the world’s worst humanitarian catastrophe, has devolved into a stalemated proxy fight between Saudi Arabia and Iran.

A series of rocket barrages also targeted US and international coalition positions in Iraq in recent months. The Biden administration has warned that it will hold Iran accountable for attacks by militias it arms and supports in the region.

The Ike’s return to the Gulf region comes as the Biden administration is set to begin indirect negotiations with Iran in Vienna on Tuesday.

The talks, moderated by European officials and attended by representatives from Russia and China, ultimately aim to curtail Tehran’s nuclear program in exchange for the lifting of US economic sanctions imposed during the previous administration of former President Donald Trump.

The Trump administration unilaterally walked out of the 2015 so-called Iran nuclear deal in 2018, drawing praise from Saudi and Israeli leaders who saw the accord as insufficient to contain Tehran’s regional ambitions.

Iran continued to expand its conventional ballistic missile program amid the agreement. US officials have alleged that Tehran has also passed weapons technology to proxy fighters in Syria, Iraq and Yemen, thus extending its strike range into US-friendly countries in the region.

The US withdrawal from the deal led Tehran to incrementally violate its nuclear proscriptions, a development that experts and Biden administration officials say has brought Iran closer to obtaining a nuclear weapon.

The current administration is aiming to prevent that outcome as it looks to devote greater attention and resources to deter China's ambitions in East Asia and the Pacific.

Officials have said they intend to continue the Trump administration’s efforts to build regional defense cooperation between Arab states and Israel to stand up to Iran’s provocations.