A group of retired Turkish navy admirals are under investigation after penning a letter on a Bosporus Strait treaty government officials claim is “reminiscent of coup times.” 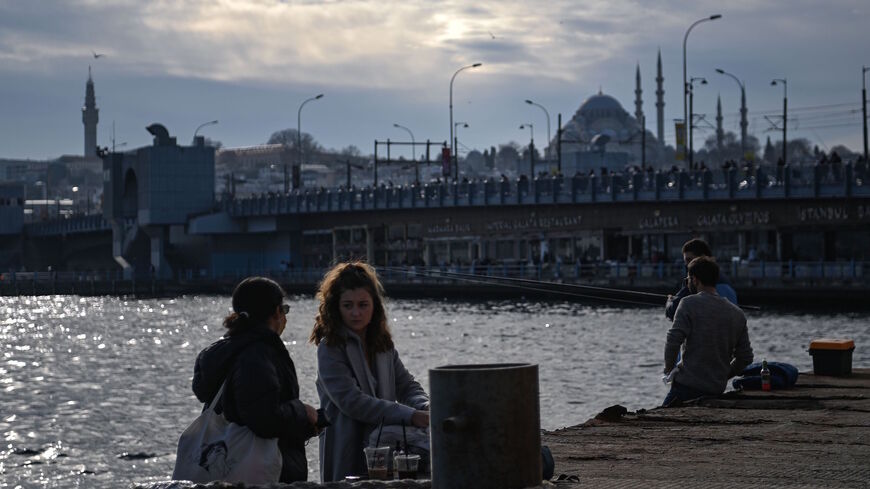 People sit along the Bosporus shore at Karakoy port in Istanbul on Feb. 8, 2021, as the Galata Bridge and the Suleymaniye Mosque are seen in the background. - OZAN KOSE/AFP via Getty Images

In a statement published midnight Saturday, the retired admirals expressed concern regarding an ongoing debate in Turkey over whether the government would pull out of the 1936 Montreux Convention, which regulates naval traffic in Istanbul’s Bosporus Strait and the Black Sea.

Due to Turkey’s history of repeated military coups, the statement was seen as a threat by members of Turkish President Recep Tayyip Erdogan’s administration, who quickly condemned the letter as an affront on the government’s mandate.

“A group of retired soldiers are putting themselves into a laughable and miserable position with a statement reminiscent of coup times,” presidential spokesperson Ibrahim Kalin tweeted Sunday morning.

Ankara’s Chief Public Prosecutor’s Office launched an investigation on the letter’s lead authors, charging them with "making an agreement to commit a crime against the security of the state and the constitutional order."

In addition to the 10 detained ex-admirals, four signatories of advanced age were ordered to visit a police station for questioning within three days. The suspects were also stripped of their pension rights, including pension payments as well as government-issued lodging and security detail.

Speaking Monday, Erdogan said the statement could not “be labeled as freedom of speech” and had “malevolent, coup implications.” He added his administration had no plans to pull out of the Montreux Convention.

"In Turkey, all the attacks against democracy have taken place following similar declarations,” Erdogan said. “Since we, in our government, have a firm stance against these attempts, they do not dare to continue their plans.”

The political storm began after parliamentary speaker Mustafa Sentop, in a late March television appearance on broadcaster HaberTurk, said Erdogan had the authority to withdraw from the Montreux Convention in response to a presenter’s question.

Some observers saw the statement as affirmation such a move was on the government’s agenda, linking it to plans to build a 45-kilometer-long (28-mile-long) canal in Istanbul that would bypass the Bosporus Strait and ongoing discussions over whether the new waterway would be subject to the convention.

On March 29, Sentop attempted to clarify his comment, saying he did not imply the government was planning to pull out of the treaty.

“There is no discussion about the positions we have achieved in the war of independence, especially in Montreux,” Sentop told reporters. “We do not even think about such an argument.”

Despite the effort, debates raged on Turkish media outlets and on social media among political commentators speculating over the future of the Montreux Convention, which in essence limits military deployments in the Black Sea to 21 days for states not bordering the body of water.

With this backdrop, 104 retired naval officers issued an open letter April 3, writing, “We are of the opinion that there is a need to avoid any statements and actions that could cause the Montreux Convention, an important treaty in terms of Turkey’s survival, to be brought up for discussion.”

The statement and its late-night publication time was likened to rhetoric preceding a military takeover by Turkish officials, both in Erdogan’s ruling Justice and Development Party as well as in opposition parties. The event triggered memories of past military coups, as Turkey has experienced three since 1960, in addition to a soft coup in 1997 and a failed coup in 2016.

“This statement does nothing but harm our democracy and negatively affect the morale and motivation of the Turkish armed forces personnel and gratify our enemies,” Turkish Defense Minister Hulusi Akar said Monday.

Ozgur Unluhisarcikli, Ankara director for the German Marshall Fund, said the letter may not have been well-timed, but he believed the admirals did not “cross a red line” in their statement, as it did not include direct threats or implications a power grab was looming if certain policies were not implemented.

“They are taking sides in a public debate, which is their right because they are retired,” Unluhisarcikli told Al-Monitor. “It would be a different case if they were on-duty officers.”

Noting the topic of military intervention in government affairs remains highly sensitive in Turkey, Unluhisarcikli said the uproar caused by the letter was largely unplanned but also likely propelled by the Erdogan administration’s tendency to portray itself as a recurring victim of political malevolence to gain favor with voters.

“The Erdogan administration doesn’t miss any opportunity to present an image of victimhood,” Unluhisarcikli told Al-Monitor.

"We woke up in the morning and saw that retired admirals released a declaration out of boredom,” Aksener said in a press conference Sunday. “My personal opinion is that this is babbling. This country suffered a lot from such babblings.”

Among the detained admirals is Cem Gurdeniz, best known for popularizing Turkey’s controversial Blue Homeland doctrine, which seeks to expand the nation’s maritime boundaries to include tracts of the Mediterranean and Aegean seas currently held by Cyprus and Greece.