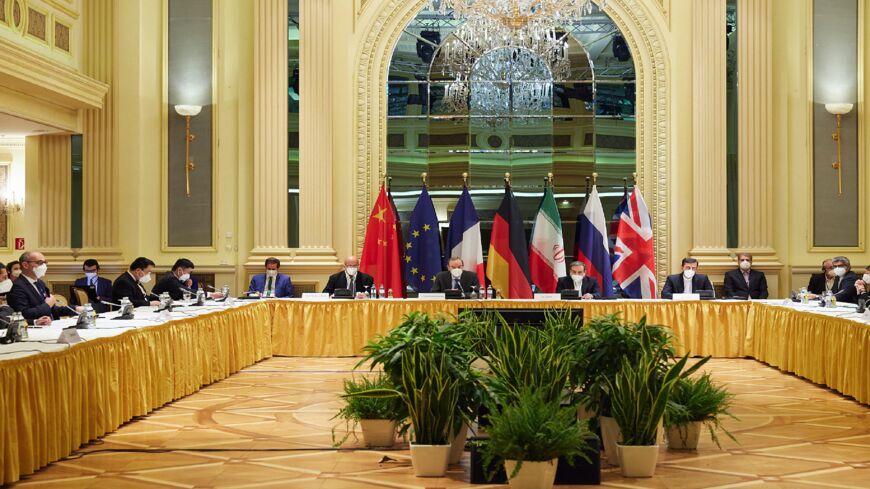 In this handout provided by the EU Delegation in Vienna, Representatives of the European Union, Iran and others attend the Iran nuclear talks at the Grand Hotel on April 15, 2021, in Vienna, Austria. Representatives from the United States, Iran, the European Union, Russia, China and other participants from the original Joint Comprehensive Plan of Action (JCPOA) are meeting directly and indirectly over possibly reviving the plan. - EU Delegation in Vienna via Getty Images

Hot take on Vienna … and the other Iran talks:

Rouhani notes 60-70% progress in Vienna. Let’s start in Vienna, where talks are underway for the return of both the United States and Iran to compliance with Joint Comprehensive Plan of Action (JCPOA). The details are trickling out and the messages are mixed, but the headline (cutting through the daily pressers and remarks, on and off the record) is that talks are ongoing and some type of roadmap to reconciliation may be emerging. While expressing all sorts of reservations and caution, Iranian Deputy Foreign Minister Abbas Araghchi nonetheless said on April 20 that the talks are on the "right track." Iran President Hassan Rouhani said today that "negotiations have progressed 60 [to] 70%, and if the Americans operate within a framework of honesty, we will see a result in a short time.” We wrote here last month that the Biden administration’s "textbook diplomacy with Iran," by rebuilding the frayed connection with European partners first, was paying off.

The other track goes through Baghdad. And then there are the "other" Iran talks, the ones brokered by Iraqi Prime Minister Mustafa al-Kadhimi between Iranian and Saudi officials last week. These talks are no less consequential, given the depth of animosity between two of the region’s major powers. The Baghdad backchannel between Iran and the Gulf had been ongoing prior to the Iran-Saudi talks and also involves the United Arab Emirates and Egypt, according to Amwaj.

Bottom line. If there was a fault to the JCPOA back in 2015, it was that there was no complementary regional security track. That’s what is now beginning to happen in Iraq. The transition of Iraq from battlefield to bridge in such a short time is about as positive a turn one can imagine for Iraq, its role in the region and its value as a strategic partner of the United States.

Read more. Hasan al-Mustafa has the take here on Kadhimi’s diplomatic maneuvering and how it complements his "Levant" focus to deepen ties with Egypt and Jordan. Jared Szuba reports here on the comments yesterday by US CENTCOM Commander Gen. Kenneth “Frank” McKenzie before the House Armed Services Committee about the future of US troop deployments in Iraq.

1. Why do Egypt’s trains keep crashing?

Egypt has witnessed five tragic train accidents in the past month, part of a long string of deadly crashes in recent years. Mostafa Al-Grtly digs into why the North African country’s dilapidated rail system — the world’s second oldest — is so accident-prone. Most experts blame long periods of neglect.

Ethiopia has accused Sudan and Egypt of politicizing the decadelong feud over the controversial Grand Ethiopian Renaissance Dam, a complaint that Mohamed Saied warns could further imperil the stalled talks. The three African countries failed to reach an agreement during the last round of talks in Kinshasa earlier this month. For the two major protagonists — Ethiopia and Egypt — the dam dispute is a matter of both national pride and the most critical natural resource — water.

The latest tough talk from Ethiopia comes after its downstream neighbors rejected a proposal from Addis Ababa to share data before the second filling of the megadam. Ayah Aman explains why Cairo and Khartoum refused “Ethiopia’s attempts to impose a fait accompli.”

3. Russia tries to play a key role in Iran talks

While the shuttle diplomacy in Vienna over the landmark nuclear accord has yet to produce a breakthrough, Moscow is hoping to play a central role. Last week, Russian Foreign Minister Sergey Lavrov met with Iranian officials to put forward Russia’s suggested approach.

As Kirill Semenov writes, the Russians are advocating a synchronized return to the deal in which Washington and Tehran would move in tandem to lift sanctions and reverse Iran’s nuclear violations. That approach, at least publicly, is a nonstarter for the Joe Biden administration, which wants Iran to resume full compliance first.

Russia is currying favor with Iran. A US-Iran agreement on the JCPOA might not be the best news for Russia. Last week, Lavrov labeled the European Union’s recent human rights sanctions on Iran “unacceptable” and warned they could undermine the fragile Vienna talks.

Turkish authorities are investigating what happened to the dozens of Turks who never returned from Germany after traveling there in September 2020 as part of an environmental project. The group had traveled on special Turkish passports in what opposition lawmakers said was part of a state-sponsored illegal migration scheme organized by a local government run by the Justice and Development Party.

As Amberin Zaman writes, the fresh human trafficking allegations against Turkey’s ruling party are “adding to mounting public anger over endemic corruption and a weakening economy.”

Tribal affiliations are expected to heavily influence voting in Iraq's parliamentary elections this October. As Shelly Kittleson explains, many voters in the Sunni-dominated Anbar province are “indebted to tribal leaders more than the government in Baghdad, which can feel very far away for many of them.”

Tribal leaders serve as important mediators and advocates in their communities, and in return, there’s “an implicit expectation” that their tribal brethren will get on board with their chosen candidates.

One cool thing: the godfather of Gaza photography

Experience Palestinian history through the lens of one of the Gaza Strip’s earliest professional photographers, Kegham Djeghalian. His grandson has turned a stash of decades-old photos into an exhibit documenting all the major flashpoints in the war-torn enclave, as well as daily life in a traditionally under-documented part of the world. As one curator put it, “Whatever happened in Gaza, Kegham captured it.”

Of the 86 members who make up the opposition alliance known as the Syrian National Coalition, eight are women. The representation gap is worse in rebel-run Idlib province where the "Salvation Government” affiliated with the jihadist group Hayat Tahrir al-Sham doesn't count a single woman among its ministers. The number of women in Syria's opposition institutions is disproportionately low, in what Khaled al-Khateb says is a “dangerous indicator of the future of their representation in the political transition processes.”

A local nongovernmental organization is hoping to change that. Hussam Hammoud writes about an organization in Idlib province promoting female political empowerment and teaching women the skills they need to support themselves.

The US Commission on International Religious Freedom has recommended in its annual report that Secretary of State Antony Blinken add Syria to the US government’s list of the world’s worst religious freedom offenders, putting it on par with Saudi Arabia and Iran as a “Country of Particular Concern.” The congressionally appointed watchdog also called for Iraq, Turkey and Egypt to be placed on a special watchlist.