After being reprimanded yesterday both by Attorney General Avichai Mandelblit and the High Court, Prime Minister Benjamin Netanyahu has nominated Defense Minister Benny Gantz to take on the Justice Ministry as well. 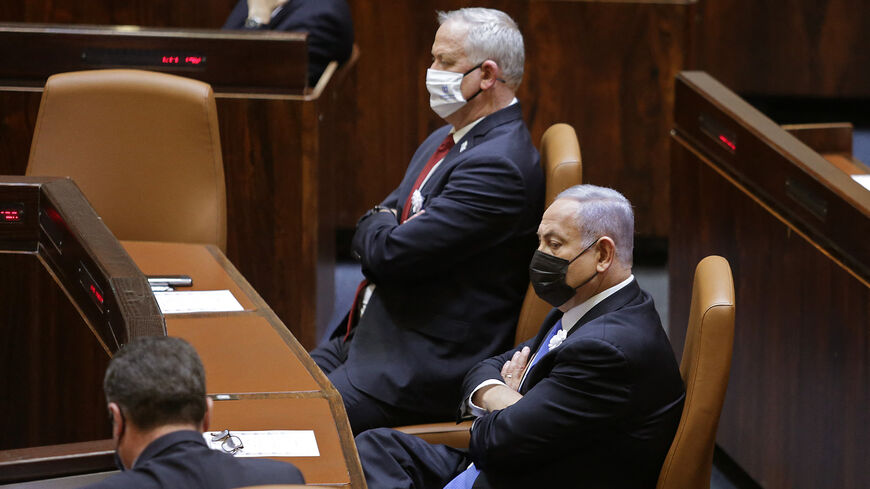 In a statement published earlier in the day by his office, Netanyahu said that he had legal arguments against the High Court and against Attorney General Avichai Mandelblit's treatment of his previous moves on the issue.

"The prime minister has submitted a detailed response to the High Court that completely rejects the argument that yesterday's vote in the cabinet was against the law. However, after the prime minister's proposals for a compromise were also rejected, and in order to get out of the deadlock and allow the necessary activities of the Justice Ministry to resume, the prime minister decided to appoint Benny Gantz as justice minister of the transitional government," read the statement.

Responding to the court, Netanyahu argued that he is authorized to appoint a justice minister and that the court and the attorney general aren’t a “super-government.” The court is “blocking the appointment of a vital minister and leading the system to a dead end,” he stated.

The justice portfolio became an issue of dispute between Netanyahu and Gantz last December, when Blue and White senior Avi Nissenkorn resigned from the position of justice minister. The unity agreement signed last May between Netanyahu’s Likud and Gantz’ Blue and White Party stipulated the establishment of a joint cabinet, with the same number of ministerial portfolios for each bloc, at the discretion of both leaders. With that in view, Gantz nominated himself to temporarily replace Nissenkorn on top of his defense portfolio.

Netanyahu resented the move. Analysts pointed out that with the legal problems Netanyahu faces, the prime minister was particularly concerned over the identity of the justice minister.

The issue became crucial after the March 23 elections. Mandelblit made it clear that a permanent justice minister must be appointed, as this position is especially sensitive in a transition period. Mandelblit made the same demand for other temporary portfolios, such as the minister responsible for water resources, science minister and social equality minister. Legally, however, these positions became vacant upon elections, thus leaving several ministries without a head in the transitional government.

Similarly, the High Court ordered the government to appoint permanent ministers to serve in the transitional cabinet while coalition talks advance, warning against a political vacuum.

Netanyahu proposed his own candidate for the position yesterday, nominating Likud Knesset member Ofir Akunis as justice minister in a surprise move. Mandelblit, who was present at the cabinet meeting, warned Netanyahu that such a vote would be illegal. He explained that the unity agreement between the Likud and Blue and White was anchored (by Likud and Blue and White’s own initiative) as a quasi-constitutional Basic Law and therefore the right to propose a candidate belongs to the Blue and White bloc. Netanyahu ignored the warning and went ahead with the vote.

The High Court temporarily froze Akunis' appointment, siding with Mandelblit. It will reconvene this afternoon on the issue, rejecting Netanyahu’s demand for more time to appoint a new justice minister. Netanyahu’s announcement appointing Gantz came less than two hours before the scheduled session.