In a blow to Prime Minister Benjamin Netanyahu, Attorney General Avichai Mandelblit recommended that the relevant ministers be consulted before any vaccines are donated to other countries. 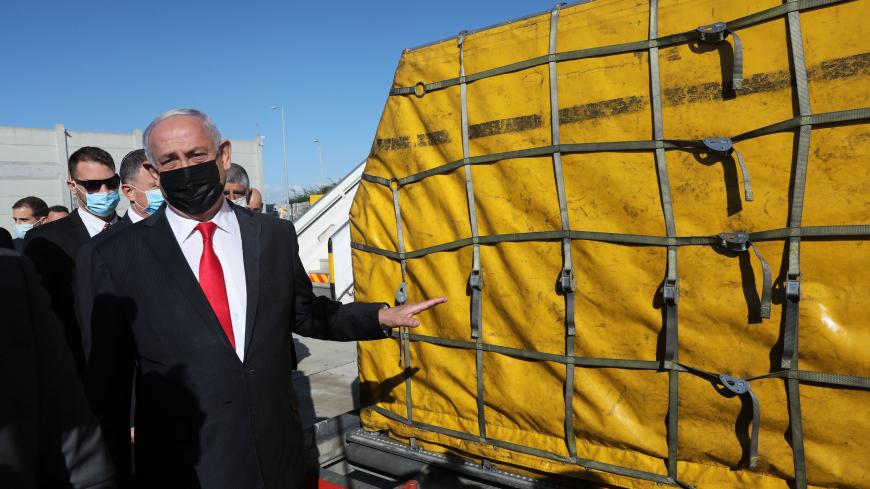 Israeli Prime Minister Benjamin Netanyahu gestures during a ceremony to mark the arrival of a plane of the international courier company DHL carrying over 100,000 of doses of the first batch of Pfizer vaccines at Ben Gurion Airport near Tel Aviv, on Dec. 9, 2020.

Israeli Attorney General Avichai Mandelblit said yesterday that any transfer of coronavirus vaccines to another country should be deliberated by the cabinet. In a letter to national security adviser Meir Ben-Shabbat, Mandelblit wrote that a first step for such a decision should be for the legal adviser of the Health Ministry to verify it corresponds to the contracts Israel signed with pharmaceutical companies, followed by consultations with the foreign minister, who should recommend which countries should receive vaccine donations, and with the finance minister, who should evaluate the budgetary aspects. Mandelblit stated, “The treatment of the matter must be done with full legal oversight … from beginning to end.”

Several politicians, including Defense Minister Benny Gantz, have demanded that the attorney general weigh in before any vaccines are donated to foreign countries, forcing the office of the prime minister to stop and ask for Mandeblit's input. The attorney general noted that he had not been asked for a legal opinion until some vaccine doses had already been given away and that he was not given significant details about the plan, “including its objectives, the compensation that was given or promised, the official who conversed with the foreign countries and so on.”

On Feb. 23, Netanyahu said he was planning to give some COVID-19 vaccine doses to the Palestinian Authority and various other recipients. Netanyahu did not specify how many doses would be donated or to which countries but some 20 countries were reported to expect between 1,000 to 5,000 doses each. The list included Honduras, Guatemala, the Czech Republic, Chad, Cyprus, Mauritania, Hungary, the Maldives Islands, San Marino, Ethiopia, Kenya, Uganda, Congo, Morocco and Equatorial Guinea. Only Honduras apparently received shipments before the move was halted.

Netanyahu’s opponents accused him of using the Moderna vaccine surplus without prior deliberations for his own political needs, to advance alliances he had forged with several world leaders. It is unclear whether Netanyahu will proceed with the donations.

Still, Netanyahu's vaccine diplomatic blitz continues on other fronts. Austrian Chancellor Sebastian Kurz and Danish Prime Minister Mette Frederiksen are expected in Israel March 4 to see Israel’s rapid vaccine drive up close and discuss the possibility of a joint vaccine venture. Netanyahu had said not long ago he was pushing for the construction of a vaccine production plant in Israel.

On Feb. 25, Netanyahu and Bahrain's Crown Prince Sheikh Salman bin Hamad Al Khalifa discussed the possible involvement by the Gulf country in establishing a vaccine plant in Israel, according to a statement from Netanyahu’s office.