Farah Akbar was killed this week by a man who was arrested but released on bail after threatening to kill her. 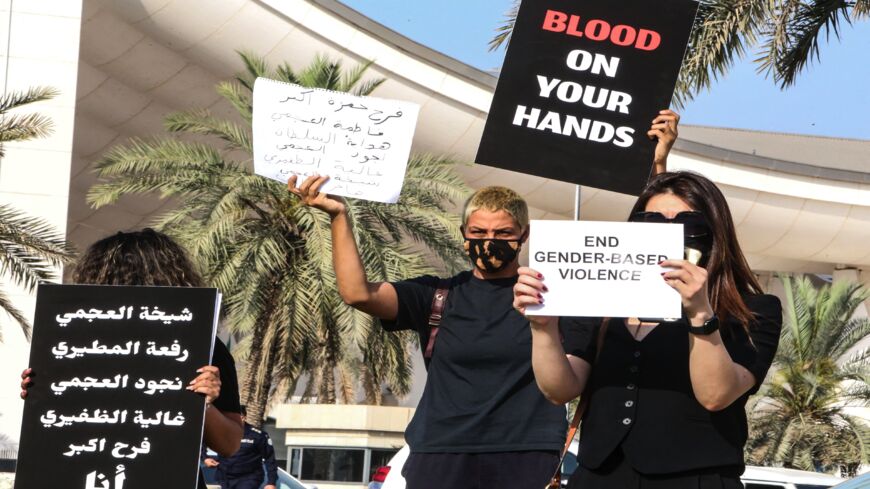 Kuwaiti women raise placards during a rally to denounce violence against women, outside the National Assembly in the capital, Kuwait City, on April 22, 2021. The women demonstrated after Farah Hamza Akbar, a 32-year-old Kuwaiti woman, was recently killed by a young man despite her filing several complaints against him. - YASSER AL-ZAYYAT/AFP via Getty Images

The murder of a woman in Kuwait by a man previously arrested for harassing her has sparked a national conversation about violence against women in the conservative Gulf country.

Farah Hamza Akbar was killed on Tuesday by a man whom she had filed two cases against for harassment after she had turned down his marriage proposal.

Fahad Subhi Mohammed had been arrested on the harassment charges after allegedly threatening to kill Akbar. He was released on bail, and police say he stabbed Akbar on Tuesday in front of her two daughters. He then dropped her off at the entrance of a hospital south of Kuwait City and fled the scene, police say.

A statement from the Interior Ministry said Mohammed, 30, “admitted to stabbing her in the chest, which was the cause of death.”

A viral video showed Akbar’s sister crying that she had informed authorities of Mohammed’s harassment, but that her appeals for help went unanswered. A group of Kuwait lawmakers has since called for an investigation into how authorities failed to protect Akbar, according to Kuwait Times.

Akbar’s death has sparked calls for change in deeply patriarchal Kuwait, with the hashtag “Sabah al-Salem Crime” (Arabic for “I am the next victim”) trending on Twitter and Instagram this week.

“Kuwait is unsafe for women,” prominent Kuwaiti fashion blogger Ascia al-Faraj tweeted. “They will harass us until they murder us.”

Using the hashtag “Lan Asket” ("I will not be silent"), activists in the tiny Gulf country launched their own “MeToo” campaign earlier this year to speak out against the normally taboo subject of violence against women. An Instagram account created by a female doctor in Kuwait began collecting and sharing stories of sexual harassment and stalking by men, in a campaign supported by the US Embassy in Kuwait.

In August, lawmakers passed the country’s first domestic violence law, though spousal rape was not addressed in the legislation and is not considered a crime.

Women gained the right to vote in Kuwait in 2005. Not a single woman was elected out of the record 33 who ran for a seat in parliament last year.