The lost Jewish surnames of Cairo

An extensive list of the surnames of the Jewish families who lived in Cairo has been published, helping tell stories across generations. 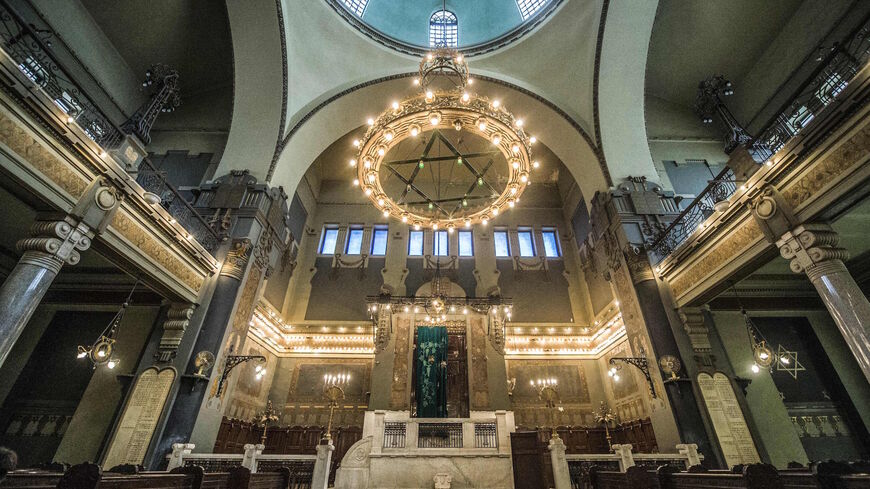 A picture taken on Oct. 3, 2016 shows a general view of the interior of the Shaar Hashamayim Synagogue in Cairo, also known as Temple Ismailia or Adly Synagogue. - KHALED DESOUKI/AFP via Getty Images

Over the last two decades, interest in the Jewish communities in the Middle East in the 19th and 20th centuries, including their history, culture, literature and religiosity, has been on the rise, as shown by the increasing number of academic and literary publications about them. And the life of the Egyptian Jewish community has not been an exception.

Yet in this expanding body of knowledge, personal narratives focusing on the individual members and experiences that made up that community have largely been missing. This is in part attributed to the paucity of archival sources and the difficulty of accessing this information due to the geopolitical context, both in Egypt and throughout the Middle East. Even in more personal works, such as memories, names were to a great extent absent.

Veteran diplomat and independent consultant in demographic mapping Jacob Rosen-Koenigsbuch, however, has started to fill these gaps. His study of the Jewish surnames found in 20th century Cairo, published in December, puts together in a single index as many as 1,854 surnames of Jewish families who resided in Cairo from the turn of the 19th century. The index has been published by Avotaynu Online, a website devoted to study the origins and migrations of Jewish populations worldwide.

“I am very active in Jewish genealogy, in the research of roots of families in Eastern Europe. I was born in Poland and my parents were Holocaust survivors, but they did not speak about what they went through. I only found out after they died, and I became quite involved in how to research about families. I [then] lived for many years in Arab countries and I got interested in Jewish families who came from Iraq, Syria, Lebanon and Egypt, so I was looking for a similar tool as we know it in Eastern Europe. But that did not exist,” Rosen-Koenigsbuch told Al-Monitor on Skype, noting that the study is  one of four that have been or are being developed, including similar indexes from Damascus, Baghdad and, soon,  Alexandria.

During the construction of modern Egypt at the beginning of the 19th century, the country experienced a large influx of foreigners, mainly driven by the expansion of the economy coupled with instability in other parts of the region. Jewish communities then grew in number to tens of thousands, and a large number of them settled in Cairo. During the convulsive period that unfolded from 1948 to 1973, amid multiple Arab-Israeli wars, most of Egypt's Jews were forced to leave, and today they are thought to number around 10.

Gathering all the surnames was not an easy task. Rosen-Koenigsbuch started consulting several people who were born in Cairo and could provide him with the few surnames they remembered. Then, he had to rely on several pools of sources. Social media and some groups of Egyptian Jews on Facebook, proved to be the most promising and offered him a quick way to communicate with people around the world. Many participants, the author notes in his study, were born in Cairo and attended elementary schools in the 1950s. He adds that their contribution is especially significant because they are able to remember the origins of families before their arrival to Cairo, allowing further genealogical research.

Another source of information was two weeklies in French that were published in Cairo between 1918 and 1945 named Israel and L’Aurore. Personal memoirs written by authors who grew up in Cairo, business and telephone directories and an index of some of the people buried in Cairo’s Bassatine Cemetery also helped him harvest surnames.

“The methodology is important because it can also apply to other communities,” Rosen-Koenigsbuch said. “If you go and look for the Italian or the Greek communities, I assume you may face the same challenges and you would have to apply the same methodology. The challenges are the same for other minority communities which, after 100 or 150 years in Egypt, left in a hurry,” he added.

He said one of the most significant findings of the study is that considering that the Jewish community in Cairo had around 40,000 members at its peak, the high number of surnames collected in the index show the dynamism and high mobility of the Jews in and out of the city. “I realized how cosmopolitan Cairo and Alexandria were. [You found] Greeks, Italians, Armenians [and] Jews, who came from Eastern Europe, Syria, North Africa, Corfu, Italy and from all over,” he said.

Rosen-Koenigsbuch also said the index presents an unexpectedly high number of Ashkenazi names, considering that the conventional knowledge is that Sephardic Jews largely dominated Egyptian Jewish life. He estimates that Jews in Cairo were around 60% Sephardic, 20% Mizrahi and 20% Ashkenazi.

Andrea Meech of New Zealand found the names of her family in the list and said it is important that more personal stories start to come out. “Our two main family names, Hazak and Rossano, didn’t sound French, but we always presumed we were French because we spoke it. It was not until I got older, and started to look into family history, that I really questioned where our family originally came from. Unfortunately, this has been very difficult to trace,” she told Al-Monitor.

“My family is aware there’s a huge gap, nothing was ever talked about, no personal stories shared. In fact, my aunt always refused flatly to talk about Egypt, calling it the ‘blasted country,’” she said. Meech now knows that her family lived in Egypt for generations, and that her grandmother met her future husband, a soldier in the New Zealand army, in Cairo. “My Egypt family went through so much in their lives, from living in Egypt for a number of generations, owning successful businesses, only for it to all end with the government confiscating everything they owned and giving them one-way tickets out of the country,” she continued. “To start all over again at their age must have been very hard,” she added.

Meech said the internet, and particularly Facebook, have proved an incredible tool in sharing the past. “I have been incredibly fortunate to live in the age where some of the Egyptian Jews have learned to use the internet and email. Stories and memories have been shared, books written, and I have a number of these,” she said. “I absolutely believe that this would not have happened otherwise. We have met missing family members on the other side of the world, traveled to meet them as they have us. We all now stay in touch because of Facebook and the Internet,” she said.

Rosen-Koenigsbuch updated the first list of surnames he had prepared in December 2019 after he got an additional 20 names soon after. And he notes that he has 30 more names that are not included in the current index, which makes him believe that the list is still not complete.

“I am offering something that is not complete, but at least is something to start with,” he said. “When you have their names, you can learn a lot about where they came from. This is not a community which lived there for like 800 years; this is a community which was created in 40 years, and disappeared,” he concluded.