The Egyptian Ministry of Antiquities is deploying efforts to restore the remaining three synagogues in Cairo’s Jewish Quarter. 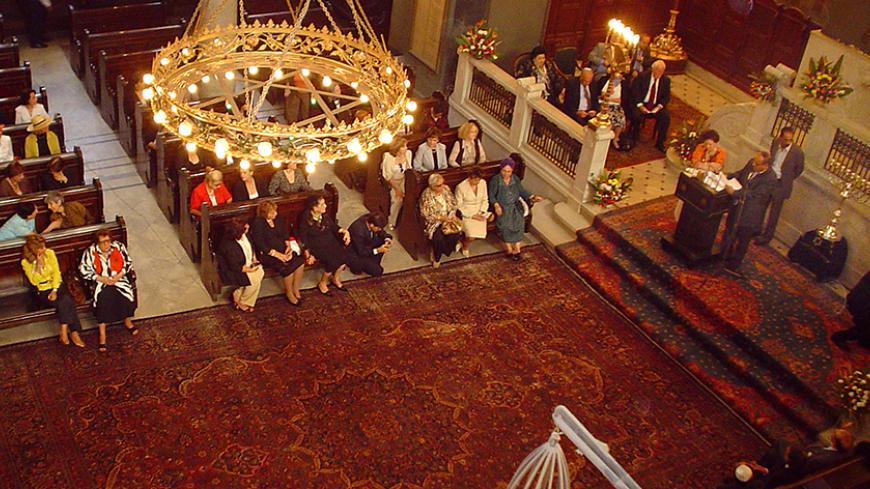 CAIRO — Nothing remains of Cairo’s Jewish Quarter, save some dilapidated Jewish monuments and Stars of David rising above the doors of some old houses whose Muslim residents have yet to remove. The Jewish Quarter was once known for being a hub of Jewish traders, artisans and handicraft workers who were famous for their gold, silver, jewelry and shoes. Today, it has become one large market for children’s toys, accessories and cosmetics.

The Jewish Quarter was a large neighborhood with streets, lanes and side streets all connected together, totaling 360 alleyways. Not only did Jews live in this neighborhood, but also Muslims and Christians.

The Jewish Quarter is characterized by a unique geographical location in Egypt, as it falls in the heart of Cairo, jammed between Islamic Cairo and Khedivate Cairo, making it an exceptional tourist attraction.

The quarter is home to 13 Jewish synagogues, built by Jews during their presence in Egypt around the end of the 19th century. Only three remain today, namely the Maimonides Synagogue, Temple bar Aouhaa and Haim Capoussi Synagogue.

Although the three synagogues are registered as Egyptian heritage monuments with the Ministry of Antiquities, they are in very poor condition. Their walls are either crumbling or eroded by underground water, and they are surrounded by garbage. Vendors use them sometimes to store their goods. Instead of being a witness to history, these synagogues are being erased by it.

The Maimonides Synagogue is one of the oldest, as it was built by the end of the 19th century. It is the most famous synagogue in all of Egypt.

Located on 15 Mahmoud Street in the Jewish Quarter, it was named for Rabbi Moses ben Maimon, who was a brilliant scholar in Judaism, medicine, mathematics and philosophy. The temple was registered as a heritage relic with the Ministry of Antiquities in 1986 given its religious, historical and architectural significance.

The synagogue includes three sections: the first for prayers and the performance of Jewish religious rites; the second includes the cemetery where Maimon is buried and a small room where Jews sit praying to be healed of illness; and the third is a room reserved for clerics and supervisors of the premises. This is in addition to a balcony for women overlooking the prayer room, as men and women pray separately.

The synagogue had been abandoned for many years after its walls crumbled because of groundwater. The Ministry of Antiquities announced June 11 its restoration and placed it on the list of tourist attractions. It will be the first synagogue open for tourists.

A few meters away from Maimonides Synagogue is Temple bar Aouhaa, which is in very poor condition. After once serving as a school for teaching the Torah, it is now dilapidated and surrounded with garbage and street vendors. For many years, the state has neglected this important temple despite its visibly deteriorating condition.

The third Jewish temple in the Jewish Quarter is the Haim Capoussi Synagogue, named after Rabbi Haim Capoussi, who was held in great esteem by many Jews.

The Haim Capoussi Synagogue is distinguished from other temples because it was built in the beginning of the 20th century, along the Italian temple model. Marble columns adorned with a wooden cabinet for keeping the Torah rise in the temple’s halls. The temple is divided into two levels: the first includes the altar and the second serves as a praying room for women.

The temple needs to be completely renovated and restored and has been closed for many years. The Egyptian government permanently closed the temple following the January 25 Revolution in 2011 after several attempts to seize it and place it on the list of temples that need renovation. However, the renovation has yet to begin.

Capoussi died in A.D. 1635 in Egypt and was buried in the Jewish cemetery area near el-Basateen district, which is seen as the second-oldest Jewish graveyard in the world after the Mount of Olives Jewish cemetery in Jerusalem, dating back to the 15th century, with an area of 120 acres. It includes the remains of Jews before their exodus from Egypt. The cemetery, however, is also in poor condition with crumbling walls and garbage strewn around its vicinity. It is not under the protection of the Ministry of Antiquities or the police.

Commenting on the status of the Jewish temples, Saeed Hilmi, the director of the Ministry of Antiquities’ Islamic, Christian and Jewish Heritage Department, told Al-Monitor, “The Jewish Quarter lies in the heart of Cairo and has a special significance as it is a witness to the coexistence and love between Egyptians regardless of their religion. The Jewish Quarter is still in our minds and will remain etched in the memory of Egyptians through the ages.”

Hilmi said, “The Ministry of Antiquities is responsible for the registered Jewish temples, which number three. We have nothing to do with other temples, especially since they did not exist 10 years ago and we do not know anything about them. As for the remaining three temples, we are done with the restoration works of the Maimonides Synagogue, and it is now placed for the first time on the list of tourist attractions in Egypt. This is an unprecedented achievement at the Ministry of Antiquities."

Hilmi rejected the claims that the ministry is neglecting the Jewish monuments, saying, “These monuments belong to Egypt and we refuse to compromise them. However, the country is facing now many challenges at the economy level and tourism is declining, which prevents us from taking care of all Egyptian monuments. However, once the tourism sector picks up its momentum and returns to normal, we will go through with our plan to restore all synagogues after registering the Jewish holdings and collectibles they contain, as we did in the synagogues of Ben Ezra in Old Cairo and Ashkenazi in al-Ataba area.”

The commission of collectibles registry for Jewish synagogues, which is affiliated with the Ministry of Antiquities, announced Aug. 11 that it had sorted and registered the holdings of the synagogues of Ben Ezra and Ashkenazi. It is an unprecedented step for the ministry to make an inventory of Jewish collectibles in synagogues. However, will it be able to deliver its promise to start renovating in the Jewish Quarter?