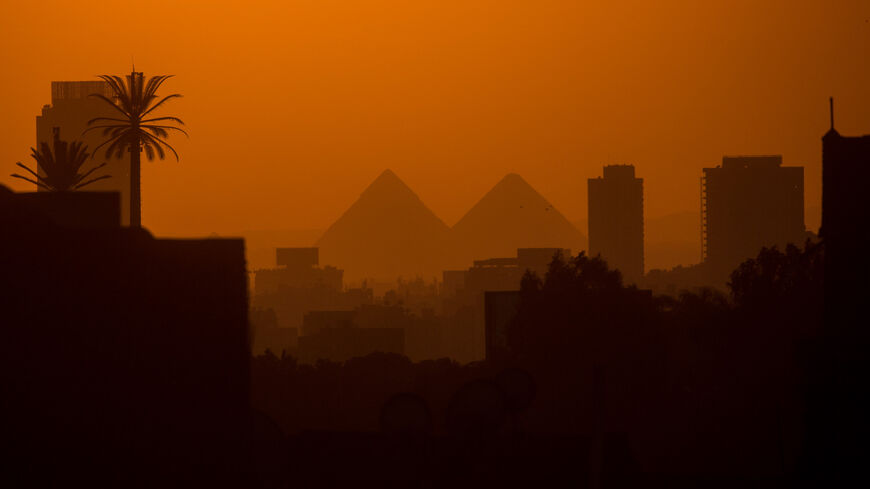 City buildings are seen in front of the famous Giza Pyramids on Dec. 15, 2016, in Cairo, Egypt. - Chris McGrath/Getty Images

The relisting of Egypt on JP Morgan's GBI-EM index is being hailed as a major step for the country’s capital markets.

“The inclusion of Egypt in JP Morgan's GBI-EM index will help deepen the country's capital markets and provide additional pools of liquidity as it widens Egypt's access to foreign investors.  The inclusion in the index will also help lengthen the maturity of the country's debt profile,” Zeinab Abdalla, director of financial institutions at Fitch Ratings, told Al-Monitor.

Egypt was removed from the index in June 2011 for failing to meet its requirements. Finance Minister Mohamed Maait said April 17 the move is in line with endeavors to reduce the cost of public debt as part of the country's economic reforms.

“Foreign portfolio inflows are important for supporting Egypt's foreign currency liquidity. Foreign holdings of Egyptian Treasury bills reached $28.5 billion at end-February 2021 after dropping to $7 billion in May [2020] as foreign investors withdrew from government debt at the start of the pandemic,” Abdalla said.

She dismissed any downside risks for Egypt. “However, a delisting from the index could negatively impact investors’ confidence in Egypt’s capital markets and trigger capital outflows,” Abdalla said.

Egypt was delisted in 2011 in the aftermath of the January 25 Revolution.

Analysts say the inclusion of Egypt in the JP Morgan Index Watch Positive is a result of the country’s economic reform program, which was launched in November 2016 after the signing of a $12 billion loan agreement with the International Monetary Fund.

“There couldn’t be a chance to be relisted while there was a parallel market for the US currency before November 2016. The pound flotation was the most decisive step taken by the Central Bank of Egypt,” Hanan Ramses, an economist at Cairo-based El-Horreya Brokerage, told Al-Monitor.

Ramses pointed out that Egypt’s issuance of green bonds in 2020 prompted JP Morgan’s move. In September 2020, it issued green bonds worth $750 million.

“The requirements of JP Morgan's GBI-EM index include consecutive bond issuances in high volumes to be injected in environment-friendly projects in a bid to cut carbon emissions. Egypt has strong potential in this regard,” Ramses said.

As for the impact in the medium and long terms, she explained that the relisting on JP Morgan's GBI-EM index will ease the issuance of bonds in local currency and enhance access of foreign investors to buy these sovereign debt instruments. “The luring of more foreign investors into Egyptian bonds would increase the country’s dollar inflows in the future,” she said.

“In the medium and long terms, the relisting of Egypt on the index would boost the country’s capability to get funding from international debt markets at lower yields and extended maturity,” Ramses said.

“Egypt will join the JP Morgan's GBI-EM index with 14 bond issuances worth around $24 billion, accounting for roughly 1.78% of the index. Without the economic reforms over the past five years, especially the currency float, it would have been impossible to be relisted again,” Ramses said.

According to her, a weaker US currency globally may boost the world’s debt markets as countries issue more sovereign debt instruments.

“The US coronavirus relief package has weakened the greenback. However, the foreign exchange of the US currency on the local market is set by the domestic supply and demand. Fortunately, Egypt’s dollar inflows have been on the rise despite the pandemic. Remittances from Egyptian expats increased, while the trade balance deficit fell,” Ramses said.

US President Joe Biden signed a $1.9 trillion coronavirus relief package in March as the United States is trying to soothe the pandemic’s impacts on households through direct payments to most Americans.

Egypt’s trade balance deficit narrowed by 1% to $9.552 billion in the first quarter of 2021, compared to $9.685 billion in the same period the previous year, Minister of Trade and Industry Nevine Gamea said on April 17.

Ramses said the sovereign debt instruments are a mechanism to finance the state budget and infrastructure projects, pointing out that Egypt’s external debt is at a safe level.