Hamzah Bin Al Hussein, former Crown Prince and half-brother to King Abdullah, says he is not going to obey restrictions. 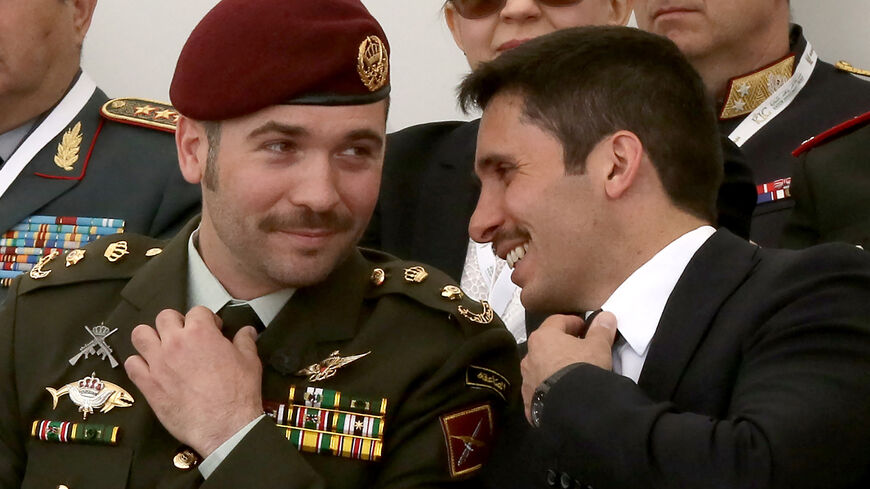 The Jordanian government made its first official comment April 4 on an unprecedented April 3 joint security operation by the armed forces and the departments of General Intelligence and the Public Security involving 14 to 16 Jordanians including the former crown prince and half-brother of reigning King Abdullah II, Prince Hamzah bin al Hussein.

Today Hamaza responded in a tweeted audio message, “I’m not going to obey when they say you can’t go out, you can’t tweet, you can’t communicate with people."

Deputy Prime Minister and Foreign Minister Ayman Al-Safadi avoided using the term coup, which has appeared in the press. Instead he spoke of a conspiracy to “destabilize the kingdom.” He identified two main conspirators associated with Hamzah: Bassem Awadallah, former chief of the Royal Court and minister of planning and finance, and a previously unknown relative of the king, Sharif Hassan bin Zaid. Safadi said no one in the Jordanian military is accused of a role in the conspiracy.

Jordan has not faced a plot to destabilize the regime since 1957 and even then it did not involve a ranking member of the royal family. The revelations have shocked Jordanians. Earlier on April 3, a statement by the armed forces said that Hamzah was asked by Chief of the Joint Staff Maj. Gen. Yussef Al-Hunaiti to “cease activities and acts that are employed to target Jordan’s security and stability.” The move, Hunaiti said, came as part of joint investigations by the security agencies that led to the arrest of bin Zaid, Awadallah and others. He denied reports that the prince was under house arrest.

In his press conference Safadi went further, claiming that the authorities had thwarted a foreign conspiracy to destabilize the kingdom. He stressed that the authorities had intercepted contacts between close circles of the prince and Awadallah and bin Zaid. He said investigations were still ongoing and that suspects could be tried before the State Security Court. As for Hamzah, he said, King Abdullah wishes to resolve the matter within the ruling Hashemite family.

Being linked to a foreign plot is a serious accusation. In an April 3 video that was aired by the BBC and shocked Jordanians, Hamzah vehemently denied it.

Hamzah confirmed that he was under house arrest and that he was cut off from the world. He said he was being targeted for being one of the "members of this family who still love this country, who care for its people and will put them above all else." Many Jordanian analysts believe that the release of the video pushed the regime to take a harder stand against the former crown prince.

Safadi also claimed that the investigation revealed that one person with ties to foreign security agencies called the prince’s wife Saturday offering a flight out of Jordan.

A few hours later, pro-government news site Ammon News quoted a source as linking the figure to the Israeli Mossad. The post was since deleted, but Axios reported April 4 that an Israeli named Roy Shaposhnik was behind the offer. Shaposnik contacted Axios and gave a statement denying any actions against the government. He told the agency that he was never a Mossad agent but confirmed he had proposed assistance to Hamzah and his family out of friendship.

Many Jordanian remain puzzled by the alleged link between Hamzah, a charismatic figure with a following among East Bank tribes, and Awadallah. While the prince has been seen as an outspoken critic of his half-brother's policies, Awadallah gained insider status over the years. Awadallah is associated with a neoliberal economic agenda under which, according to critics, the king sold the state’s major assets, impoverishing Jordanians and leading to an unprecedented surge in foreign debt.

Awadallah was a close aide of King Abdullah for more than 15 years and remained in touch with the royal court after he left his last position in 2011. He later became a consultant to the newly appointed Saudi Crown Prince Mohammad Bin Salman while maintaining business interests in the United Arab Emirates. In 2016, the Jordanian king appointed him an emissary for the royal court responsible for Jordanian-Saudi ties. He is believed to hold a Saudi passport along with bin Zaid.

King Abdullah visited Riyadh March 8 and met with bin Salman. Saudi King Salman and the crown prince both called King Abdullah on April 5 to express solidarity and support. Saudi Arabia was the first country to issue a solidarity statement with Jordan on April 3. Other countries followed, including the United States, Qatar, the UAE and Turkey.

The nagging question is which foreign governments stand behind Awadallah and bin Zaid in attempting to destabilize the kingdom. King Abdullah stripped Hamzah and other brothers of direct links to the armed forces more than four years ago.

Safadi has refused to name foreign parties suspected of involvement in the conspiracy, saying that the government is carrying an ongoing investigation.

On the evening of April 5, the Royal Court issued a statement saying the king has deputized his uncle, Prince El Hassan bin Talal, to resolve the issue with Prince Hamzah. The statement said that after the king's uncle contacted Prince Hamzah, the latter "affirmed his commitment to the Hashemite tradition and the course of action entrusted by His Majesty to Prince El Hassan." This indicates an apparent end to the royal rift which will leave a majority of Jordanians relieved. But questions remain on how the government will handle the prosecution of other suspects in the so-called conspiracy and what damage could come out of it to Jordan’s relations to close allies.