Kurdish authorities say they will continue administering the vaccine following the European Union's conclusion that blood clots should be listed among "rare side effects" of the British-Swedish vaccine. 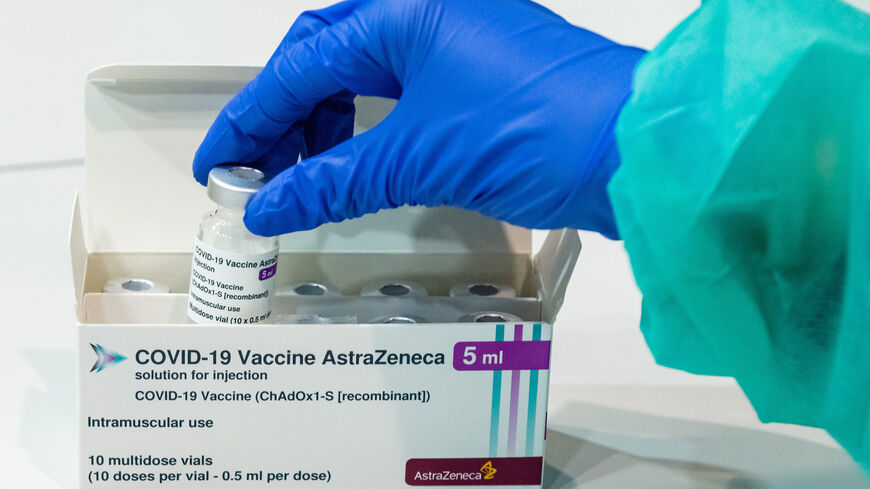 Medical staff handle an empty vial of the AstraZeneca vaccine against COVID-19 at a vaccination center during the third wave of the coronavirus pandemic on April 8, 2021, in Erfurt, Germany. - Jens Schlueter/Getty Images

The Kurdistan Regional Government in Iraq will continue using the AstraZeneca vaccine against COVID-19 after the European Union concluded there is a small chance it could cause blood clots. The British-Swedish vaccine is being deployed in several Middle Eastern countries while some European and African states are restricting its use.

A KRG Health Ministry spokesperson said that there have been no major issues with the AstraZeneca vaccine in the semiautonomous Kurdistan Region and that its administration will continue.

“There have been no major side effects. No blood clotting,” Aso Hawezy told Al-Monitor. “The Kurdistan Region will continue using it and continue using the other types of vaccines as well.”

On Wednesday, the European Union’s European Medicines Agency said that “unusual blood clots with low blood platelets should be listed as very rare side effects” of the AstraZeneca vaccine following a study. However, the EU body does still recommend taking the vaccine.

“The reported combination of blood clots and low blood platelets is very rare, and the overall benefits of the vaccine in preventing COVID-19 outweigh the risks of side effects,” the agency said in a press release.

The Kurdistan Region received 43,800 doses of the AstraZeneca vaccine in March. It previously received 5,000 doses of the Chinese Sinopharm vaccine. The region has a population of more than six million people.

The KRG is seeing an increase in daily coronavirus cases. A curfew is in place in the region to mitigate the virus’ spread.

A March report from the Kurdish news outlet Rudaw said that some Kurdistan Region residents are skeptical of taking any vaccine, as is the case in much of the world.

Many other areas of the Middle East are also using the AstraZeneca vaccine. In March, Jordan received 144,000 doses of the vaccine and has begun administering them. The Palestinian Authority began administering Pfizer and AstraZeneca vaccine doses after a shipment from the World Health Organization’s COVAX program. Lebanon is also using AstraZeneca, but some people are hesitant to take it, according to Lebanese news reports.

European trust in the vaccine has decreased significantly following the reports of blood clots.

Reactions to the reports of blood clots have been mixed internationally. Canada, like the Kurdistan Region, is still recommending the AstraZeneca vaccine, while Denmark suspended its use over the issue. South Africa also suspended using the vaccine, but cited concerns about its effectiveness against COVID-19 variants.