With help from the Gaza municipality, a rescue group has established a rare animal shelter in the enclave. 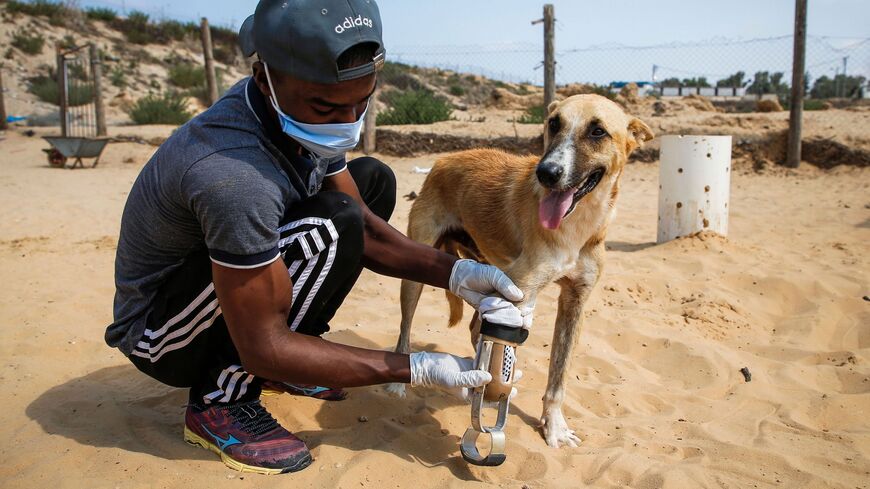 Palestinian founder of the Sulala Society for Animal Care Said al-Arr fits amputee dog Billy with a new prosthetic limb made in cooperation with the Gaza municipality at the association's shelter in Gaza City on Sept. 9, 2020. - MOHAMMED ABED/AFP via Getty Images

The shelter, built on two dunams of land (2,000 square meters) south of Gaza City, was established by the Gaza municipality in cooperation with the Sulala Association, the only organization of its kind in the Strip, to shelter stray dogs and protect local residents.

Wadia told Al-Monitor, “Every afternoon, we set up cages to catch these dogs in residential neighborhoods. We catch three to five dogs a day, then we take them to the shelter to tame them and provide them with medical care and food.”

He explained that he started caring for dogs when he was eight years old and studied dog breeds and dog training.

The shelter is home to about 200 stray dogs and one litter of kittens. Male dogs are separated from females to prevent breeding. “The reserve rejects dog breeding and offers a compassionate solution for them by providing them with shelter instead of letting them get shot by citizens. The shelter includes a number of dogs that were hit by bullets and have lost legs,” Wadia said.

Speaking of a shelter resident he's named Nancy, Wadia said, “It is not always true that citizens are harmed by dogs; sometimes it is the other way around. We found Nancy lying on the side of a road in Gaza City with a broken leg after being beaten by children. We provided her with medical care and got her a home in this shelter.”

Saed al-Arr, one of the managers, told Al-Monitor, “We came up with the idea of ​​establishing the shelter two years ago, but due to the lack of funding, implementation was delayed. It is only when the Gaza municipality allocated land for the project that we were able to set it up.”

He explained that the shelter provides food by collecting it from the leftovers of farms and poultry slaughterhouses.

Arr said that the shelter has been severely affected by the coronavirus pandemic and the closures imposed to curb infections. “The markets for slaughtering selling poultry, like other popular markets, closed their doors during the lockdown periods, which caused us problems in securing food for the dogs.”

On April 7, the Ministry of Health in the Gaza Strip reported a new record for infections, with 1,916 cases in 24 hours. The Ministry of Interior closed all markets, event halls and educational institutions.

At such times, the shelter uses dog food that has been stored for emergencies, Arr said.

As for medical care, he explained, “When dogs are brought to the shelter, they are examined by veterinarians provided by the Sulala Association. The Ministry of Health secures the necessary medicines and vaccinations to combat various diseases.”

He noted that more than 60% of the dogs brought to the shelter suffer from diseases or fractured limbs.

Along with Wadia and Arr, who work as supervisors, a volunteer field team of four catches dogs on the street as part of an initiative by the Gaza municipality that started On April 3.

The director of the Preventive Health Department at Gaza Municipality, Mohammed Al-Ashi, told Al-Monitor, “We receive dozens of complaints daily from citizens … because of these loose dogs that roam residential areas adjacent to agricultural lands.”

He explained that the municipality provides the shelter with cages and transportation and contributes to feeding them.

Ashi concluded, “Gaza municipality plans to develop this shelter at a cost of $30,000 and encourage other cities in the Gaza Strip" to do the same. However, he said, such efforts are hindered by a lack of funding amid the Israeli blockade.