The UNESCO announcement that Egyptian architects won the international competition for the reconstruction of the historic Al-Nouri Mosque complex in Mosul sparks debate as to whether their design fits Iraq’s Islamic heritage. 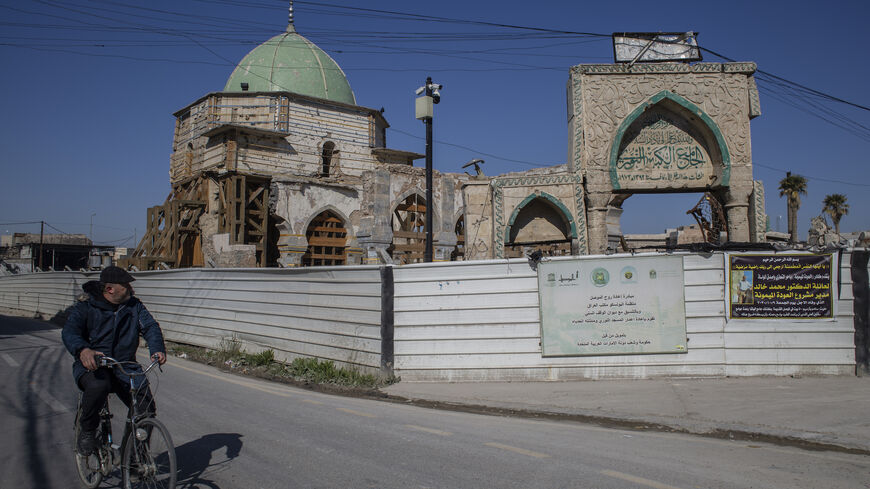 A man on a bicycle rides past Al-Nuri Mosque, which is under reconstruction after it was destroyed in the war against ISIS, on Feb. 28, 2021 in Mosul, Iraq. - Hawre Khalid/Getty Images

CAIRO — The United Nations Educational, Scientific and Cultural Organization (UNESCO) announced April 15 that a design submitted by eight Egyptian architects had won the international competition for the reconstruction of the historic Al-Nouri Mosque complex in Iraq’s northern city of Mosul. The complex is a key component of UNESCO's “Revive the Spirit of Mosul” project for the rehabilitation of the ancient city following its 2017 liberation from the Islamic State (IS).

The winning Courtyards Dialogue design was one of 123 submitted by architects from around the world. It was presented by a team of four partners and four architects led by Salah Hareedi, a professor of architecture at the University of Alexandria’s Faculty of Fine Arts.

The mosque where IS leader, Abu Bakr al-Baghdadi, made his first public appearance on July 4, 2014, was essentially destroyed during the June 21, 2017, battle for the liberation of Mosul between IS on one side and Iraqi and US forces on the other. The mosque, which dated to 1172, was famous for its leaning minaret, which had been one of its last few remaining original features. While witnesses say IS blew up the mosque during the battle before the city was retaken by the government forces and video backs this up, IS claimed, without evidence, that the structure was destroyed by US air raids.

On Nov. 17, UNESCO launched an international architectural competition for the reconstruction of the Al-Nouri Mosque complex. Participants were asked to submit a conceptual design by March that took into account the conservation of the standing structures of the mosque's prayer hall, their integration into the plan and the rehabilitation of a number of historic buildings.

Hareedi told Al-Monitor by phone that the team members studied the mosque’s history, social life in areas surrounding the complex, the nature of the site and the area's weather. He said the team utilized architects who had previously worked in Iraq.

He said the team worked hard to meet UNESCO's vision for the revived mosque to serve as a source of hope for the residents of Mosul and Iraq in general.

Hareedi said the Courtyards Dialogue name was chosen because the project is not just limited to the mosque but also includes an adjacent plot of land that is to include educational buildings, a seminar hall and a museum for the mosque. The design seeks to connect the mosque to this plot of land in an integrated way, particularly since interconnection was a key feature of the competition in light of Iraq's divisions.

A major challenge for the team, Hareedi said, was coming up with a design philosophy and then translating this into an architectural formula.

The announcement of the winning project sparked social media debate, especially among Iraqis, on whether the design fits in with Mosul’s history and culture. Some also criticized UNESCO for selecting an Egyptian proposal rather than an Iraqi one. Some said they thought the design has a Gulf character that does not suit Iraq.

Ahmed Alomary, a member of the UNESCO jury for the international competition who heads the Department of Architecture at the University of Mosul, said in a Facebook post April 17 that the winning design meets the aspirations of the people of Mosul for rebuilding the mosque as they remember it. The new design is distinguished by the improvements that the competition requires as it offers the expansion needed for the mosque while meeting the public’s desire for the return of its leaning minaret, he added.

He said the jury made a good choice in selecting the Egyptian team's design, pointing out that its use of a courtyard to connect various elements is very common in Mosul’s architectural tradition. The design involves the rehabilitation and construction of the Al-Nouri school, the Higher Institute of Art and Islamic Architecture and the multipurpose hall.

Alomary said the competition involved a strict application of the International Union of Architects’ conditions in the absence of any interference or pressure by any party, particularly since all entries were encrypted and the jury could not tell who had presented which entry. He called for a positively response to the jury's choice while also pointing out there were only eight Iraqi entries, compared with 115 proposals from abroad.

Hareedi stressed that the project sticks to the mosque’s time-honored archaeological design and that the new elements take into account the city’s general spirit in a way that connects the old and the new.