A volunteer rescue group searched the Mediterranean waters but found no survivors. 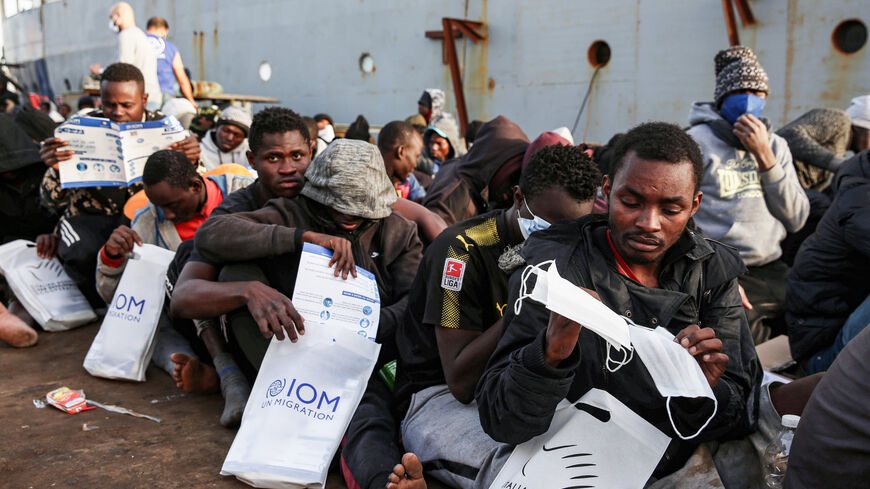 Migrants rescued off the coast of al-Khums receive aid packages as they sit on the pier at Tripoli's naval base on Feb. 10, 2021. - AFP via Getty Images

More than 130 migrants are believed dead after their rubber boat sank off the coast of Libya, the UN migration agency and rescue organizations said Friday.

In a statement, French volunteer rescue group SOS Méditerranée said its Ocean Viking vessel responded to an alert of three boats of distress in the central Mediterranean waters northeast of the Libyan city of Tripoli. After hours of search in the rough seas, the rescue crew discovered 10 floating bodies and no survivors.

“We searched relentlessly without receiving support from the responsible maritime authorities,” said Luisa Albera, the search-and-rescue coordinator onboard the Ocean Viking.

“States abandon their responsibility to coordinate search and rescue operations, leaving private actors and civil society to fill the deadly void they leave behind,” Albera said. “We can see the result of this deliberate inaction in the sea around our ship.”

The migrants had sent a distress call to a rescue hotline, Alarm Phone, which says it was in contact with the rubber dinghy for 10 hours before it sank.

“The people could have been rescued but all authorities knowingly left them to die at sea,” the hotline service said in a statement. Alarm Phone “repeatedly relayed its GPS position and the dire situation on board to European and Libyan authorities and the wider public.”

More than 500 people have drowned on the Central Mediterranean sea route so far this year — nearly three times as many during the same period last year, according to the International Organization for Migration (IOM).

Earlier this week, the Libyan coast guard intercepted an overcrowded boat carrying more than 100 migrants who were returned to the North African country, where they were reportedly detained. A mother and child were found dead on board, the agency said.

The IOM said a third migrant boat this week carrying 40 people is reportedly missing at sea.

“What we fear is that the worst has happened, given the status and the state of these boats, given the length and duration that people are spending in what remains the most dangerous sea crossing in the world,” IOM spokesperson Safa Msehli told journalists in Geneva on Friday.