China, which has a limited role in Middle East peace-making and security, has proposed a five-point initiative to achieve security and stability in the Middle East, including a meeting between Palestinian and Israeli officials in Beijing. 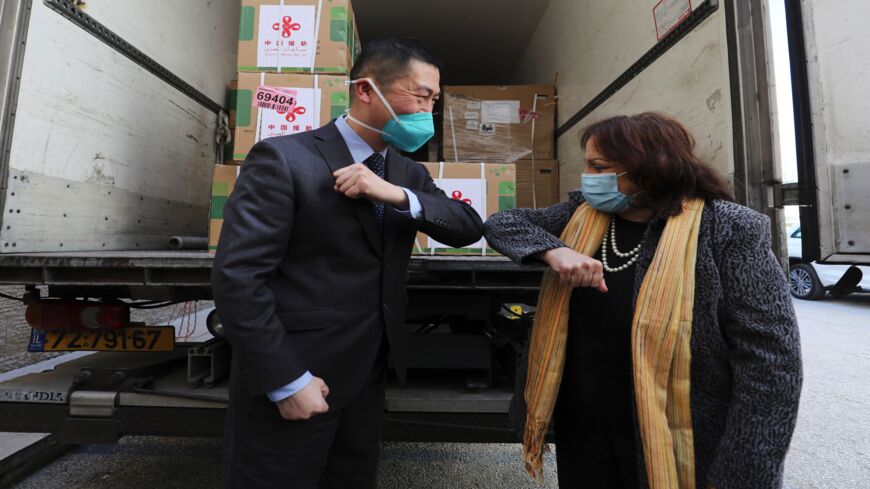 Chinese Ambassador Guo Wei (L) and Palestinian Health Minister Mai al-Kaila bump elbows during the unloading of a shipment of the Sinopharm COVID-19 vaccines donated by the Chinese government in the city of Ramallah in the West Bank, on March 29, 2021. - ABBAS MOMANI/AFP via Getty Images

GAZA CITY, Gaza Strip — China has been making major political moves in the Middle East region, including an attempt to stir up the Israeli-Palestinian peace file.

Chinese Foreign Minister Wang Yi announced on March 24 his country’s plan to invite Palestinians and Israelis for talks in Beijing.

Yi’s statements to Al-Arabiya channel came on the sidelines of his recent tour to the Middle East region that kicked off in Saudi Arabia on March 24 and will extend to six other countries including the United Arab Emirates, Iran, Bahrain, Oman, Turkey and Qatar.

Through this diplomatic trip, which comes two months after Joe Biden was sworn in as president of the United States, China seems to have gone a step ahead of the new US administration.

In his interview with Al-Arabiya channel on March 24, Yi also proposed a five-point initiative to achieve security and stability in the Middle East, expressing his nation’s increasing interest in the region for political and economic goals, and waging a somewhat implicit duel against the United States.

The official Palestinian stance favoring the expansion of the scope of the International Quartet on the Middle East peace process and rejecting the United States as a sole mediator in the Israeli-Palestinian negotiations seems to have encouraged China to start these moves.

China and Palestine enjoy good relations. Meanwhile, the Palestinian Authority (PA) has accused successive US administrations of bias toward Israel, specifically the former Donald Trump administration. Trump halted financial aid to the Palestinians, recognized Jerusalem as the capital of Israel, moved the US Embassy from Tel Aviv to Jerusalem and closed the PLO headquarters in Washington.

The official explained that the Palestinian leadership is relying heavily on the Chinese diplomatic moves and stances to break the US monopoly in the Palestinian-Israeli peace process, as many countries are reluctant to go against the United States in this process.

He further indicated that the Chinese position aligns with the initiative proposed by President Mahmoud Abbas in October 2020 in which he called for an international peace conference in the Middle East based on the two-state solution. His call was welcomed by several countries, including China.

A few hours after Yi announced the Chinese initiative on the Middle East, Biden announced the resumption of US assistance programs that support economic development and humanitarian aid to the Palestinians. The United States also announced $15 million in humanitarian assistance to confront the coronavirus crisis and food insecurity in the West Bank and the Gaza Strip.

Palestinian Prime Minister Mohammed Shtayyeh welcomed the resumption of US aid. In an official statement on March 25, he described the move as a “step in the right direction toward reshaping the US-Palestinian relations.”

The United States had halted its aid to Palestine during Trump's term in the White House “due to his stances on the Palestinian issue,” which Shtayyeh said were “contrary to international legitimacy decisions.”

Before taking these diplomatic moves in the Middle East, China initiated a vaccine diplomacy. It donated to the Palestinians 100,000 doses of the Sinopharm vaccine on March 11 as a contribution to the Palestinian government vaccination campaign.

Majdalani asserted that the Palestinian leadership continues to reject the United States as the sole mediator of the Middle East peace process and supports the expansion of the Quartet to include China.

US Secretary of State Antony Blinken had revealed the Biden administration’s inclinations toward the Middle East and toward the Palestinian-Israeli file in particular. On Jan. 19, he made clear that Biden believes the only viable settlement in the Israeli-Palestinian conflict is the two-state solution, but he will continue recognizing Jerusalem as the capital of Israel.

Hamas, for its part, welcomed the Chinese initiative. Hamas leader Hamad al-Raqab told Al-Monitor, “China has always backed the Palestinians and their rights, and its positions have always been in favor of Palestinians. We will study Yi’s initiative and support any point that goes in line with our positions.”

On the Chinese support for the two-state solution to the Israeli-Palestinian conflict, Raqab said that Hamas’ positions in this regard are clear, and the movement supports the establishment of a Palestinian state on any part of Palestinian land on the condition that the rest of the land is not relinquished and resistance will continue to recover it.

Raqab added that several international parties, including China, Russia and the European opposition, have adopted positive stances regarding the Palestinian cause and have good relations with Hamas.

China does not recognize Hamas as a terrorist organization; it recognized the movement’s victory in the 2006 Palestinian legislative elections. Beijing has hosted in the past Mahmoud al-Zahar, the foreign minister in the former government formed by Hamas following its 2006 victory. In contrast, Hamas has repeatedly praised the Chinese positions on the Palestinian cause.

Israel, for its part, has yet to issue any official position on the Chinese initiative, amid expectations that it will remain silent in light of its rejection of any mediation in negotiations with the Palestinians other than by its staunch ally, the United States.

Talal Okal, a political analyst and writer for the Ramallah-based Al-Ayyam newspaper, told Al-Monitor, “The Chinese initiative reflects the increasing interest by Beijing in the Middle East files, in an attempt to break the US monopoly on negotiations between the Palestinians and Israelis. China is also convinced that the success of its economic ambitions in the Middle East is related to its contribution to a solution to the Palestinian-Israeli conflict.”

Okal warned that the Chinese moves will face many obstacles, especially from Israel, which sees the United States as the sole mediator for the peace process.

For her part, Palestinian political analyst Reham Odeh said that China is promoting itself as a strong competitor to the United States in the Middle East region. “China wants a diplomatic entry in the region,” she told Al-Monitor. “This will help it achieve its economic ambitions represented in its massive Belt and Road Initiative, which aims to revive the ancient Silk Road stretching across Asia and Europe to transport goods from and to China.”

Odeh ruled out that China would score instant success in the Palestinian-Israeli file. “The right-wing government in power in Israel has been the [main] reason for the halt of negotiations with the Palestinians. It has been stalling in accepting any new proposals to relaunch the peace process.”

Palestinian-Israeli peace negotiations were suspended in April 2014 after Israel refused to release old Palestinian prisoners, freeze Israeli settlement construction in the West Bank or accept the two-state solution based on the pre-June 4, 1967, borders.

China in the Mideast
Israeli-Palestinian conflict