MV Helios Ray was off the coast of Oman on Wednesday. Israel blamed last week's explosion aboard the ship on Iran, which Iran denied. 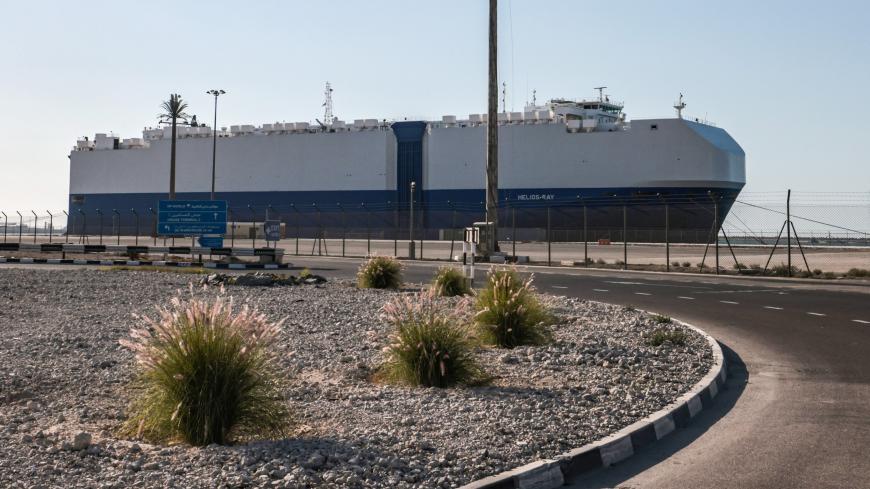 The Israeli-owned Bahamian-flagged MV Helios Ray cargo ship is seen docked at Dubai's Mina Rashid (Port Rashid) cruise terminal on Feb. 28, 2021. The vehicle carrier was traveling from the Saudi port of Dammam to Singapore when a blast occurred Feb. 25. It was back at sea again March 3. - GIUSEPPE CACACE/AFP via Getty Images

An Israeli ship that suffered an explosion blamed on Iran is back at sea.

The MV Helios Ray was sailing southeast off the coast of Oman on Wednesday, according to data from MarineTraffic.

An explosion occurred aboard the cargo ship Feb. 26 in the Gulf of Oman between Iran and the Arabian Peninsula. There were no injuries. The Helios Ray is owned by a Tel Aviv-based company, but flies the flag of the Bahamas.

The vessel left port in Dubai, where it had docked for repairs following the blast, The Associated Press reported Wednesday.

On Monday, Israeli Prime Minister Benjamin Netanyahu blamed Iran for the explosion, but the Iranian Foreign Ministry denied involvement. Suspected Israeli airstrikes hit Iranian targets in Syria that day, which Israeli media outlets reported as a response to the purported attack on the ship.

It is unclear where Helios Ray is sailing. It listed both its destination and origin as Dubai, but is currently heading away from the Emirati city.