Israel's High Court has halted the cable car Jerusalem project for now, but opponents of the project fear it will not be blocked indefinitely. 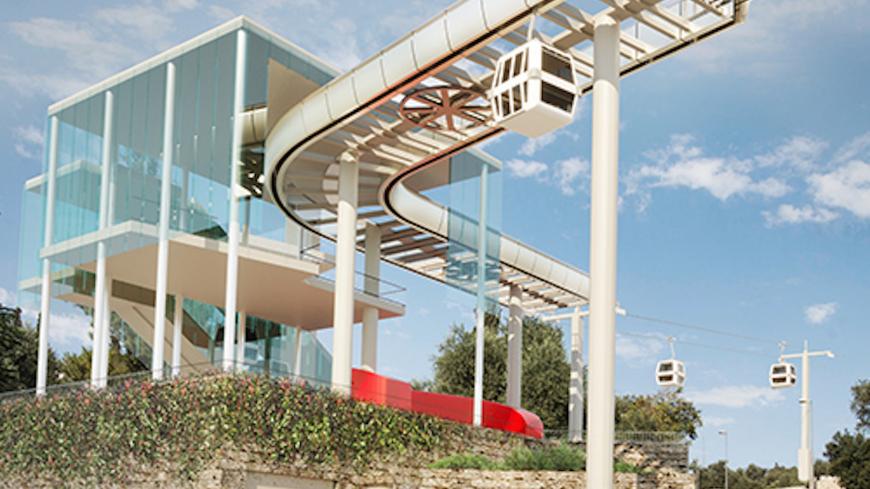 Israel's High Court has given Israeli officials until April 22 to explain a series of issues related to Jerusalem's controversial aerial cable car project. In the meantime, all work on the project has been suspended.

The Feb. 24 ruling dealt a hard blow to the Jerusalem municipality, the Jerusalem Development Authority and the Tourism Ministry, which have all invested a great amount of effort and time on the project, which is expected to cost around 200 million to 220 million shekels ($60 million to $66 million).

The proposed gondola system would stretch over 1.5 kilometers (nearly a mile) from western Jerusalem to the walls of the historic Old City in what is called an effort to help relieve traffic congestion and increase accessibility to the area of the Holy Basin. The municipality said the system would transport 3,000 passengers per hour in each direction, using 73 carriages, with three stops.

Over the past three years, the court has convened several times to examine petitions against the project. In their Feb. 24 ruling, the justices asked the State of Israel to explain why the project was discussed and approved through a special procedure at Israel’s National Infrastructure Committee, unlike other urban projects that went through Jerusalem’s District and Planning Committee. Had the project been brought to Jerusalem committee, citizens would have been invited to offer their opinions and submit their reservations and objections.

The justices also questioned the government definition of the cable car project as predominantly a transportation one rather than a tourism one. While the state has insisted there were no flaws in the special approval process, it appears the National Infrastructure Committee may not have been in possession of all the necessary data when the decision was made for it to take up the project. For example, the committee did not present professional opinions substantiating the definition of the project as a transportation infrastructure project. Had the project been defined as predominantly touristic, it could not have been transferred to the National Infrastructure Committee for approval.

In addition, the justices wondered why the route of the cable car could not modified in oder to avoid harming or desecrating an ancient Karaite cemetery in the vicinity.

Among those objecting is the nongovernmental organization Emek Shave, which works to prevent the politicization of archaeology in the Israeli-Palestinian conflict’s context. Then there are Palestinians living in Jerusalem, the Karaite international community and many architects and urban planners. In March 2019, 27 international architects — including Ron Arad, Moshe Safdie, Santiago Calatrava, Peter Eisenman and Thom Mayne — signed a letter calling on the government to halt the plan. They fear it will irrevocably damage the city’s skyline. With such a long list of groups and individuals objecting to it, the cable car project might never have been approved had it been processed through Jerusalem's District Planning and Building Committee.

Lawyer Sami Ershied is representing residents of the Palestinian Silwan neighborhood, just outside the Old City. They have objected the project from the beginning. They say the project would empty the village of its tourists, who would instead be transported directly above the neighborhood.

“As far as the residents of Silwan are concerned, this project should not have been born in the first place. It critically and disproportionally damages their life fabric. It substantially hurts the Old City of Jerusalem and its environs. The cable car won’t serve the populations living in Jerusalem, but will deepen the damage to the Palestinians living in Silwan and the Old City. Foreign motives were behind the decisions taken [to advance the project] without any consultation or respect for the residents of Silwan or the Old City,” Ershied told Al-Monitor.

Lawyer Neria Haroeh represents the Karaite community. He told Al-Monitor that should the cable car pass above the community’s cemetery, this will desecrate the burial ground and render it unusable. “The Karaite cemetery is a unique heritage site. For hundreds of years, leaders of our community were buried there. We have no other site and we have no intention of parting from it, which is what will happen should the cable car project get realized. It is unclear why the Jerusalem Development Authority insists on that route,” he said.

Haroeh said that by pushing the cable car project forward, authorities are first and foremost interested in advancing another project of a visitor center near the Western Wall. That center, he claims, is privately funded, but the cable car is funded by the public. For him, this means that the cable car is being advanced for unacceptable foreign motives.

Emek Shave, which championed the legal petition against the project, expressed satisfaction with the court's ruling, but warned that this is just a first step. The battle ahead is still long, said the group. “The cable car project should never have seen the light of day. Jerusalemites and many Israelis, including a long list of organizations, have been asking for three years the same questions as the High Court put forward today but have been ignored. The flaws outlined by the High Court prove that Jerusalem must be protected from those who wish to destroy the city and harm its residents. We expect the developers of the project to show responsibility, internalize the criticism and stop wasting public resources on such a destructive vision for Jerusalem,” the group said.