Urbanists are claiming that the Jerusalem cable car project would destroy the ancient city’s skyline, while Karaite community members deplore desecration of their cemetery. 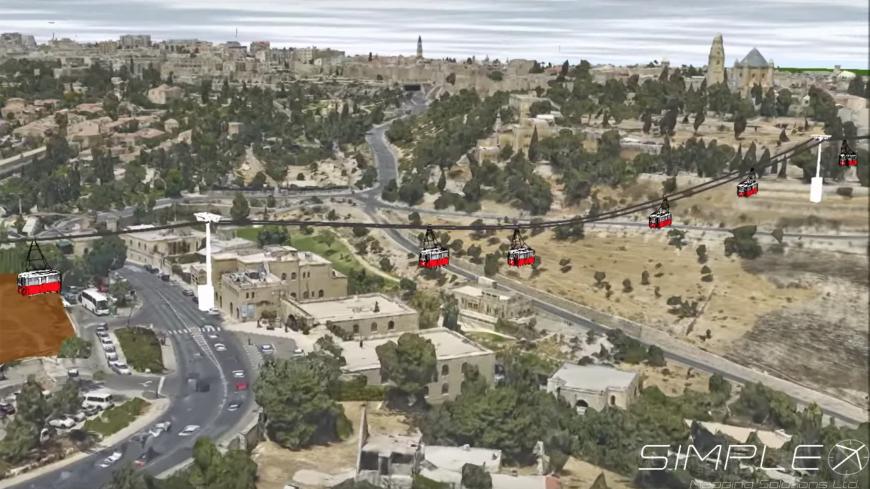 An artist's impression of what the cable car would look like. Posted Dec. 10, 2017. - Youtube/Simplex Mapping Solutions Ltd

Barring significant delays, in two years Jerusalem will roll out a new cable car able to transport 3,000 people an hour from the new city straight to the Old City’s Holy Basin, home to the world’s holiest Jewish, Christian and Muslim sites. The government approved the 200 million Israeli shekel ($55 million) project last May, on the annual celebration of Jerusalem Day marking unification of its eastern and western parts, and plans have been submitted to national planning authorities. The planned 1.4-kilometer (0.9-mile) route will begin at the complex that once housed Jerusalem’s first train station, floating at a speed of 21 kph (13 mph) over the biblical Hinnom Valley and stopping at Mount Zion. From there, it will glide to the controversial, planned Kedem compound adjacent to the Old City’s Dung Gate. The cable car will initially have three stops and eventually be extended to additional sites in East Jerusalem, such as the Pool of Siloam, Mount of Olives and Gethsemane.

The plan has generated criticism from many quarters. Last September, Haaretz reported that prominent architects were warning the project would be a blight on the unique skyline of the walled Old City. A month later, the newspaper published a petition signed by dozens of writers, artists and archaeologists under the slogan “Jerusalem is not Disneyland.” The signatories wrote that the plan “would completely alter the skyline, the scenery and the character of the historic and holy space around the Old City. The cable car will be completely out of place in the Old City and seriously damage the Hinnom Valley.”

Left-wing organizations argue that the project is politically motivated, specifically to strengthen Israel’s hold on the Old City and benefit Elad, a Jewish nongovernmental organization (NGO) instrumental in many controversial Jerusalem initiatives. Elad is building an ambitious City of David Visitors Center at an archaeological site known as the Kedem compound, on the roof of which the cable car will have its final stop, for now. “The City of David welcomes all initiatives designed to develop the Old City and make it more accessible to millions of visitors of all religions and backgrounds,” a representative of Elad told Al-Monitor on condition of anonymity.

Meanwhile, the initiative is drawing fire from unexpected directions. The small Jewish Karaite sect has also announced its opposition because the cable car route takes it over the community’s ancient burial grounds and risks desecrating the dead. “We have a problem with cable cars flying over the ancient cemetery,” Shlomo Gever, leader of the world Karaite community, told Al-Monitor. Gever is convinced that the Jerusalem Development Authority (JDA), the project’s main sponsor, is deliberately targeting the small group because it lacks political backing. “They had plans to run the cable car over the Protestant and Catholic Sambuski Cemetery, but they decided to pick on us instead. We don’t have a political lobby and we are an easy target for abuse.”

Gever said the fight is just beginning, adding, “We plan to petition the Supreme Court and we are considering a massive demonstration if need be.”

On March 4, yet another obstacle emerged. The Ministry of Transportation announced that it does not recognize the cable car as a transit solution for easy access to the Old City, but rather a tourist initiative, contradicting claims by the Ministry of Tourism and the JDA. Aner Ozeri, the JDA’s point man on the Holy Basin development, told Al-Monitor that the issue is a technical one. “The project arose from a desire to resolve problems of accessibility and traffic congestion for both tourists and residents of the Old City. The cable car will whisk people to the Old City in 4½ minutes,” he said. “Jerusalem’s Old City is a unique combination of residential areas and tourism sites, and tourists and residents alike experience congestion and access difficulties. The cable car will provide tourists, visitors and residents with an appropriate and readily available transportation infrastructure with convenient connections to Jerusalem’s mass transit system — the light rail, quick rail — at the cost of a single public transportation ticket.”

One of the project’s leading opponents is Emek Shaveh, an NGO dedicated to the defense of cultural heritage rights and ancient sites. “There is no precedent for a historic city, thousands of years old, having a cable car,” archaeologist Yoni Mizrachi, the NGO’s director, told Al-Monitor. “This is a political project advanced by the right. The very fact that it has been defined as a national project, enabling it to bypass [most] zoning and planning authorities, raises serious questions.”

Arnon Segal, an activist on behalf of Jewish prayer on the Temple Mount and a resident of the Old City, is an enthusiastic proponent, arguing that he himself experiences severe transportation problems. “Opponents of the plan disguise their hatred of Zionism with pseudo-professional arguments,” he told Al-Monitor. “The Old City must not be shut down. It must be open and accessible to all.”

Opponents, however, point to another downside of the plan: Tourists will glide overhead, bypassing the merchants who run a booming business along the access roads to the Holy Basin. “All of my income is based on tourists,” Mohammed Fatah, owner of a souvenir shop in the Old City’s Christian Quarter, told Al-Monitor. “If there is a cable car, tourists will ride over us and the shops will be empty.”

His friend Rami, who works in a bakery, agrees. “I live in the Muslim Quarter. It takes me at least half an hour to get out of the city, but I will never use the cable car. It belongs to the radical [Jewish] right.”

The JDA dismisses all these arguments. Regarding claims of political motivation, they insist, “We are a public organization, not a political one. Our entire interest lies in advancing Jerusalem.” As for the Karaite objection, they say, “We visited them at our own initiative, but they severed contact and chose to talk with us through the media. That's a strange way of doing things.”

As for the merchants’ concerns, the JDA said that on the contrary, the cable car would only boost the number of tourists to the Old City and “anyone who wants to experience the city by foot will not use the cable car in any case.”

As with every issue related to Jerusalem, this one, too, generates suspicions on all sides. The city, which sits atop a dynamite keg at the best of times, will soon have to deal with a project of an unclear nature. Will Jerusalem, which seems to be turning more violent and dangerous each year, continue to be a tourism magnet that requires a cable car? Right now, no one knows the answer.