Many secular Israelis express hatred towards the ultra-Orthodox, whom they blame for the continuing coronavirus pandemic. 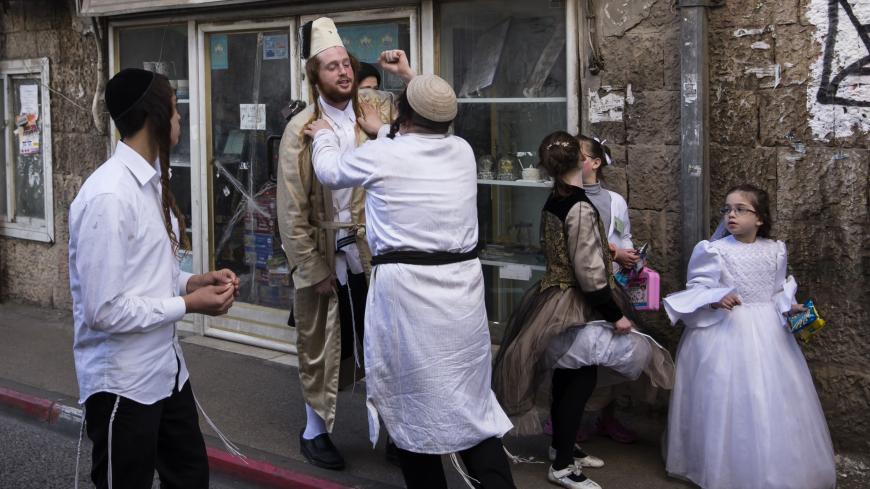 Ultra-Orthodox Jews celebrate the Jewish holiday of Purim, in the Ultra-Orthodox neighborhood of Mea Shearim on Feb. 28, 2021 in Jerusalem. The Israeli government shut down public transport and organized group travel into Jerusalem over the weekend to cut down on the size of crowds that would gather amid continued concerns about a resurgence of COVID-19. - Amir Levy/Getty Images

Nothing prepared Yakir Lance — an ultra-Orthodox fellow who lives in the heart of Tel Aviv — for his encounter with a secular cab driver at the end of January.

Lance ordered a cab through a taxi app, as he usually does, and waited outside his home. When a taxi drove past him without stopping, Lance assumed that it was some kind of mistake. Then he called the driver, who told him directly, “You are an ultra-Orthodox disease spreader; I can’t take you,” and sped away.

The political responses were not long in coming. The chairman of the Yisrael Beitenu party, Avigdor Liberman, responded with sarcasm. “Who said the ultra-Orthodox don’t know how to fight?” asked Liberman, who has long sought end exemptions that allow the ultra-Orthodox to avoid performing the country's mandatory military service.

“The things we have been seeing over recent days remind us mainly of ‘Wild West’ movies or the Civil War in the States. Stop telling stories that we’re looking at fringe groups; we’re facing the most central currents of the ultra-Orthodox sector. The time has come to stop giving in to violence, and adopt real enforcement steps. So long as we don’t stop funding law-breaking educational institutions, or shutting them down, we’ll never end this chaos.”

For Liberman and for hundreds of thousands of secular Jews, COVID-19 exemplifies the grim reality of their lives: the ultra-Orthodox don’t serve in the army, they enjoy the fruits of inflated budgets, don’t take a significant role in the labor market and, last but not least, don’t even allow Israeli society to fight the COVID-19 plague.

In general, the last days of January were dreary and bleak. The month wound up being called “Black January” due to the record-breaking number of coronavirus deaths. The media emphasized that while secular children were locked in their homes and could not attend educational institutions, the ultra-Orthodox conducted themselves as an autonomous unit and opened their educational institutions despite the lockdown. Simultaneously, the Health Ministry reported a dramatic rise in the number of those infected with COVID-19 within the ultra-Orthodox sector.

Back to Yakir Lance, who sensed firsthand the charged atmosphere between the ultra-Orthodox and the secular. After he came to his senses, he decided to take his story to the media.

In an interview with Ynet, he said: “We have been living on Shenkin [Street] for 18 years, and never before have I encountered any kind of racism. You just can’t believe that it’s happening to you.” As a result, the cab company rushed to apologize, made it clear that it “dealt with the incident” and said it advocates “values of equality and tolerance.”

It turns out, however, that this was not an isolated story, only that most of these other incidents never reached the media.

For example, a wealthy secular businessman from Tel Aviv told Al-Monitor this week, on condition of anonymity, “I was waiting for the elevator to my office, and an ultra-Orthodox person waited with me. When I saw that he intended to join me in the elevator, I told him, 'Decide: it’s either me or you.' He remained outside.’’ This businessman, who had voted for Blue and White three times, has decided to vote for Liberman this time.

Another example is that of a member of the Likud party central committee. This person, who spoke with Al-Monitor on condition of anonymity, said he is angry at the way Benjamin Netanyahu is conducting himself vis-a-vis the ultra-Orthodox and claimed that ultra-Orthodox politicians are politically blackmailing the prime minister. The Likud member said he is even considering changing his allegiance to opposition leader Yair Lapid. “Netanyahu’s behavior infuriates me. The ultra-Orthodox are now paying the price for their COVID-19 behavior. I find myself admonishing ultra-Orthodox people on the street to wear masks. I’m also sick and tired of this,” the man said.

On the other hand, there are hundreds of thousands of ultra-Orthodox Jews who follow the rules; they don’t send their children to school and they pray at home. And they, too, find themselves targets of verbal hate attacks. In the eyes of many secular Jews, all ultra-Orthodox people look alike, making it easy to generalize.

On Feb. 26, Channel 12 published an investigative report on this issue. The report examined who is entering Israel now that Israeli skies are closed. It should be explained that only the Exceptions Committee can authorize arrivals to or departures from Israel, and only in exceptional humanitarian cases. This report, which caused a storm, claimed that the skies are closed to secular Jews but open to the ultra-Orthodox. In the report, we see ultra-Orthodox Jews descend from a flight that landed last week from New York (it is easy to count them because of their distinctive clothing). Some of them were interviewed, and claimed they received special treatment from the Exceptions Committee due to their political contacts.

Later on, information was released showing there had not been an ultra-Orthodox majority on the flight under discussion. The opposite is true: The flights from Europe to Israel primarily carry secular Jews. But in such a tense atmosphere, who cares about facts?

Shortly after the expose became public, Purim was celebrated in Jerusalem on Feb. 28. Under governmental directive, police closed all entrances into the city to public transportation. The rationale was to prevent the ultra-Orthodox population from holding their traditional celebrations in massive event halls. But the ultra-Orthodox did not give in: Some rented private vehicles, while others moved on foot, pushing baby carriages to Jerusalem. All this caused massive gridlock — and anti-ultra-Orthodox sentiment returned.

There is no doubt that ultra-Orthodox behavior in COVID-19 will be a factor in the elections, and there is even less doubt that Liberman will be the main person to profit from it. Ultra-Orthodox opinion leaders claim that all this is wild incitement against an entire public.

Right-wing Orthodox journalist Shimon Riklin tweeted Feb. 28, “In the old days in Europe, when a political party was losing ground, the method was: Blame the Jews, and save yourself. Now in Israel, the Jewish state, when political parties lose ground … the method is: Blame the ultra-Orthodox, and save yourselves. That is more than a little anti-Semitic, and very disgusting.”

Will Netanyahu lose the government because of the ultra-Orthodox? It is hard to tell, at this stage. Obviously, Netanyahu can’t turn his back on 16 ultra-Orthodox, sure-fire Knesset seats. On the other hand, a large part of anti-ultra-Orthodox sentiment comes from the anti-Netanyahu bloc. Therefore, for the moment, the polls don’t show any dramatic changes.