How the call to prayer is uniting Israel's Arabs, ultra-Orthodox 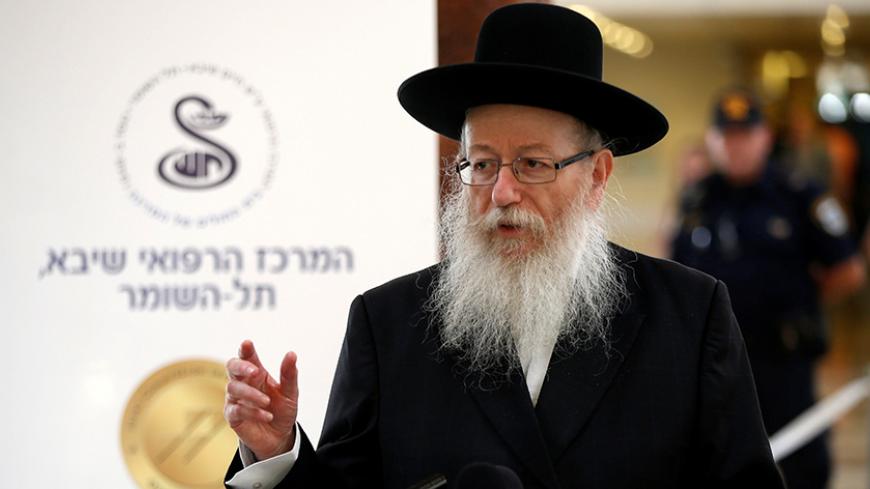 Israeli Health Minister Yaakov Litzman, during a briefing to members of the media on the medical condition of former Israeli President Shimon Peres, near Tel Aviv, Israel, Sept. 14, 2016. Minister Litzman recently blocked a bill that would have limited the noise level of Muslim muezzins’ loudspeakers. - REUTERS/Baz Ratner

On Nov. 15, before the so-called Muezzin Law, which states that the noise level of the muezzins’ loudspeakers needs to be limited, was presented at a preliminary reading in the Knesset, the chairman of the ultra-Orthodox Yahadut HaTorah Party, Minister of Health Yaakov Litzman, blocked the advancement of the controversial bill. The appeal he submitted regarding the decision of the ministerial committee on legislation, which authorized the bill, was based on the fear that the bill would silence not only the muezzins but also the Sabbath sirens that sound off in ultra-Orthodox population centers every Friday evening to announce the beginning of the Sabbath.

The minister’s appeal received warm responses from the Joint List of predominantly Arab parties. The chairman of the party, Knesset member Ayman Odeh, said in response, “I thank Minister Litzman for submitting the appeal and blocking the reading of the bill, and I truly believe that today a significant step was taken in the cooperation of the disadvantaged in our society.” Joint List Knesset member Ahmed Tibi also praised the ultra-Orthodox and said that in the past, when Yesh Atid Chair Yair Lapid raised the draft law for enlisting the ultra-Orthodox, there were those who pressured Tibi to vote for it. But the ultra-Orthodox explained to him that this is their most sensitive issue, and thus he decided to abstain. Now, he says, the ultra-Orthodox are returning the favor.

Yehudah Fisher, a resident of the settlement Beitar Illit, which neighbors the Arab villages of Husan, Batir and Wadi Fuchin, is angry about the blocking of the law. “The sounds of the muezzin are a serious environmental nuisance that we hear loudly five days a week, including at 4 a.m. for several minutes,” he told Al-Monitor. “The Sabbath siren sounds once a week, in the afternoon, for a few seconds. I’m willing to give up the Sabbath siren, which I think is unnecessary as it is, to silence the noise of the muezzin.”

On the other side, Yisrael Weingarten, also a resident of Beitar Illit, supports Litzman and understands the concern of the Muslims. “I’ve lived in Beitar Illit for 15 years,” he told Al-Monitor. “At a certain point, I stopped hearing the muezzin. Not because it stopped, but I developed selective hearing. Whoever tells you it wakes him up is lying. At first it did wake me, but then you get used to it.”

Weingarten said he is concerned about the impact on the Sabbath siren. “[Defense Minister Avigdor] Liberman has said that we have to silence the Sabbath siren, and the moment there’s a law you never know how far it would go. The Sabbath siren is very important. Many people work until the last moment before the Sabbath and don’t pay attention to when exactly the sun starts to set. The siren announces that the Sabbath is starting and you have to stop working.”

According to him, the muezzin is not a nuisance but part of life in the region. “Whoever lives here has to take it into consideration,” he added. “They [those objecting to the muezzin call to prayer] bring examples from Europe, but that isn’t right. In Europe, the Arabs came there and it’s the right of the natives to protect their customs. But we live here together; I was born here just as a Muslim was born here. I can’t silence him and he can’t silence me. Today, whoever is different is considered a nuisance. That’s the reason I think for many Israelis the ultra-Orthodox are a nuisance and the Arabs are a nuisance. But what can you do? You can’t make everyone be like you.”

Then, on Nov. 20, Liztman said that he would agree to back the law if the Sabbath siren is excluded from it. In response, Tibi clarified that the Arabs would appeal to the High Court if a distinction is made that would discriminate against the muezzin calls as opposed to the Sabbath siren.

Knesset member Issawi Frej of the Meretz Party expressed disappointment at the ultra-Orthodox inclination to support the law if it doesn’t hurt the Sabbath siren. “I thought that finally, there’s a righteous man in Sodom, the ultra-Orthodox Minister Litzman, but he folded and I’m very sorry about that,” Frej told Al-Monitor. “Now the burden of proof is on the ultra-Orthodox, to show that they are truly interested in cooperation with the Arabs.”

According to Frej, the Arab Knesset members have always sought cooperation with the ultra-Orthodox. “The problem of the ultra-Orthodox is that they are too concerned with party discipline and benefits, and think only about their interests to the exclusion of anyone else,” he said. “Theoretically, nothing makes more sense than cooperation between the ultra-Orthodox and the Arabs. There’s no difference between Judaism and Islam — they are both monotheistic religions. A religious person is a religious person and it doesn’t matter what his religion is. The problem is that the ultra-Orthodox do not have the courage necessary to do so. Apparently it is too complicated [for them], because they get close and back away every time. I’m sorry that the Arab parties have no partner in the Knesset; everyone is united against them.”

Odeh agrees with Frej, saying, “I think all the disadvantaged groups in society have to find a way to work together. We have much in common with the ultra-Orthodox. The Arabs and the ultra-Orthodox have lived here as neighbors long before the founding of the state and did not hurt each other. We are not meant to be enemies. In many respects there is an overlap between our communal culture and their communal culture, and it is possible to cooperate.”

A source from Yahadut HaTorah told Al-Monitor on condition of anonymity, “There is a lot of individual cooperation between Arab and ultra-Orthodox Knesset members that isn’t known. There is a real personal friendship between some."

The source added, “There’s also a lot of understanding between the two sides because they both know about the complexity of religious and national commitments. On the other hand, there is a public relations problem today [vis-a-vis Israeli society] with publicly cooperating with the Arab parties — especially now that they are one body [the Joint List regroups several Arab parties] and contain super-extreme elements within the Joint List. It does not look good. Not to the Israeli public in general and not to the ultra-Orthodox public. So we are very careful about it on the public level, but beneath the surface cooperation is very positive and productive.”