With vaccination rates still relatively low in Israeli-Arab towns and villages, residents there wonder how the upcoming month of Ramadan will look like. 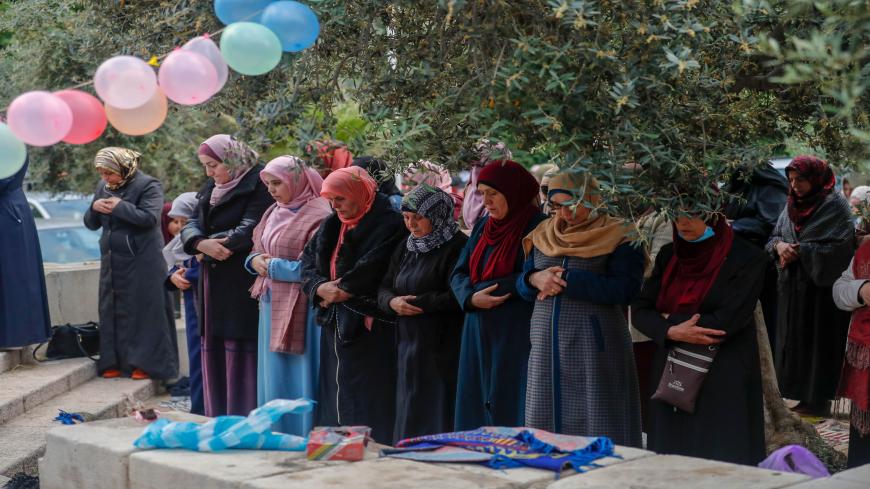 Palestinian female worshippers gather to attend the prayers of Eid al-Fitr, the Muslim holiday at the conclusion of the holy fasting month of Ramadan, outside the closed Al-Aqsa Mosque complex in Jerusalem's Old City, May 24, 2020. - Ahmad Gharabli/AFP via Getty Images

“We bet on Israel, and we’re glad we did, because what you’ve done here exceeds anything we could have imagined,” said CEO of Pfizer Albert Bourla in a March 11 interview with Israel’s N12 news agency. He was explaining why Pfizer chose Israel to serve as the pilot for his company’s international vaccine distribution project. It has a relatively small population and a health-care system that collects data efficiently. In fact, the successful nationwide campaign turned a small country in the Middle East into a global leader, when it comes to the percentage of the population that has already been vaccinated against the coronavirus.

But there is a problem. At the start of the month, the nationwide infection rate was 1, while the infection rate in the Arab public reached 1.17. Thus, most of the towns still marked “red” by the traffic light model now being used come from the Arab sector.

On March 23 — just a week and a half away — Israel will be holding its fourth election in just two years. For the Arab public, which is mostly Muslim, the really important date will be sometime in mid-April when Ramadan begins. This is when people gather in large groups for the iftar meal to break the daily fast, for special prayers in the mosques and for spending time with family and friends until the wee hours of the morning.

What will happen during the month of Ramadan obviously depends on the success of the vaccination campaign over the next few weeks. Especially since Israel now starts emerging from the lockdown. The more people who get vaccinated, the greater the chances of really celebrating Ramadan, especially when compared to last year after the pandemic first erupted. Back then, celebrations were necessarily curtailed, because of the many restrictions, which included a nighttime curfew. Mosques were closed and the festive iftar meals were limited to the immediate family.

Nevertheless, many people in the Arab public have been unwilling to get the vaccine for a number of reasons. These include a sense of distrust in the authorities, the dissemination of fake news about the vaccine itself and apathy (or just tiredness) toward the pandemic, especially when compared to the first few months of the coronavirus outbreak.

On the other hand, none of this justifies the fact that the rate of inoculation in the Arab population is lower than it is among the Jewish one. While people all around the world are waiting for the vaccine, in Israel vaccines are waiting for people, especially in the Arab towns and villages. Because vaccination rates are so low, clinics dispensing the vaccine have begun giving shots to young people, even though the available vaccines were earmarked for older people first.

So what is expected for Ramadan this year? Ziyad Abu Mukh, head of the Interior Ministry's Muslim desk, told Al-Monitor, “We will prepare a list of guidelines for Ramadan, which is fast approaching. We plan to release them to the media and on social networks. It should be remembered that for the spread of the virus, mosques could become a problematic spot due to the high number of worshippers during Ramadan. Two weeks before Ramadan begins, we will decide what steps to take, after looking at the rate of infection and the percentage of people who already received vaccinations. We will meet with the Ministry of Health and decide on the guidelines together.”

When asked whether closing the mosques like last year was an option, he responded that he did not think that would happen, given the vaccination campaign. “We appeal to worshippers in the mosques every Friday and ask them to get vaccinated. This year the mosques could be kept open during Ramadan in accordance with the guidelines. These will likely include social distancing between worshippers, compulsory face masks and limits on the number of worshippers in attendance.”

Meanwhile, the Ministry of Health already started putting together its own guidelines for Ramadan, based on the assumption that the infection rate will remain in the same range as it is today, despite efforts to increase the rate of vaccination in the Arab sector. In practical terms, the ministry does not anticipate a nighttime curfew like last year. On the other hand, iftar meals will still be limited to the immediate family and prayers will be held outdoors, with access to the mosques limited to people who have a green tag, meaning that they have been vaccinated or have recovered from the disease. Furthermore, movement at the crossing points with the Palestinian Authority (PA) will be limited.

One of the most pressing questions is what will happen at Al-Aqsa Mosque in Jerusalem. Given the volatility of the site, a decision about it has yet to be made. There are too many considerations that must be taken into account.

The Health Ministry’s spokesman for the Arab public, Zahi Saeed, told Al-Monitor, “The vaccination rate in the Arab population is about 20% less than the Jewish population. Fifteen people died of the coronavirus on Wednesday [March 10], of whom eight were Arabs. In fact, most severe cases now in the hospital are from the Arab sector. Apathy toward the vaccination campaign is very disconcerting. That is why we are working on guidelines for Ramadan that will emphasize celebrating the iftar meal with the immediate family only and result in fewer interactions between people. At the same time, it is important to remember that we are also under intense political pressure. To tell you the truth, it is quite possible that this pressure will impact our final decisions.”

Asked what particularly worries him, he answered, “The whole situation is worrying, even though the overall vaccination rate in Israel is very impressive. What we must not forget is that people in the PA have yet to be vaccinated, and the crossing points are open, weddings are allowed and they [Israel] are about to reopen the airport. Taken together, all of this could cause the infection rate to rise again.”