'Scores' of migrants burned to death from Houthi projectiles in Yemen: HRW 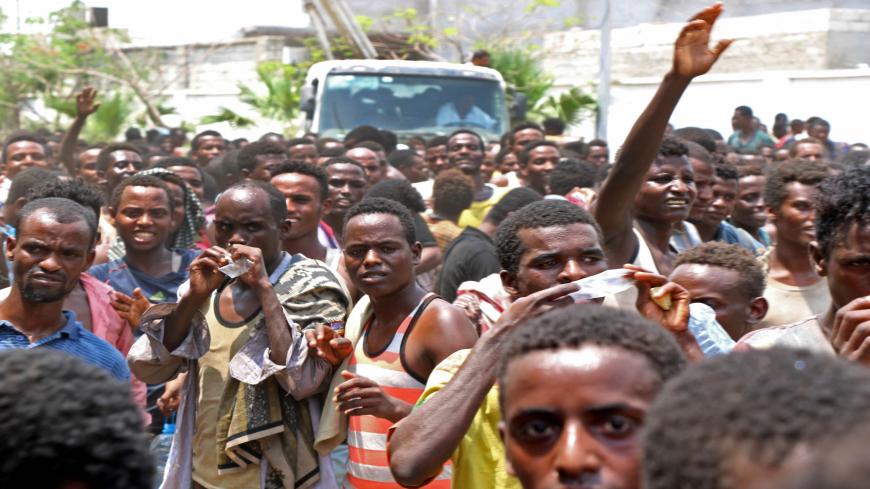 According to the New York-based rights group, the mostly Ethiopian detainees were protesting their living conditions on March 7 when Houthi guards rounded hundreds of them up, locked them in a hangar and told them to say “their final prayers” before firing two projectiles into the facility.

“The migrants said the first projectile produced a lot of smoke and made their eyes water and sting. The second, which the migrants called a ‘bomb,’ exploded loudly and started a fire,” HRW said in a statement.

“People were roasted alive,” one migrant told the group. “I had to step on their dead bodies to escape.”

Based on witness accounts and an analysis of video footage, HRW said it appeared the guards had used smoke grenades, tear gas cartridges or stun grenades on the inmates. Two videos showed “scores of charred dead bodies … lying in positions that suggests they were trying to flee but were overcome by smoke and fire.”

The International Organization for Migration (IOM) estimated more than 170 people were injured in the fire, with at least 90 in serious condition. The United Nations migration agency called on the Houthis to allow aid workers and health-care staff access to the hospitals treating the injured.

The Houthis shifted the blame to the UN, which the group’s Interior Ministry said was “fully responsible” for “its failure to play its role in providing shelters … for gathering and accommodating illegal immigrants.” In a statement provided to HRW, Houthi spokesman Mohammed Abdulsalam said the fire shouldn’t be “politicized.”

"The incident that took place was a normal result that occurs in similar incidents all over the world,” Abdulsalam said, adding that international organizations need to “improve the conditions of boarding centers.”

Each year, some 100,000 migrants from the Horn of Africa arrive in Yemen by boat, with the hope of finding employment in the wealthy Gulf states. The migration agency estimates at least 6,000 migrants are stuck in detention centers across Yemen, with hundreds, if not thousands, more held by smugglers.

HRW interviewed five Ethiopian migrants detained with some 550 other migrants at the Houthis' “cramped and unsanitary” holding facility in Sanaa. Detainees were not given mattresses to sleep on and had limited access to food and water, prompting some to drink from the faucets above the toilets, the interviewees said.

Nadia Hardman, refugee and migrant rights researcher at HRW, called on the Houthis to stop holding migrants in dire conditions that put their lives at risk.

“The Houthis’ reckless use of weapons that led to scores of Ethiopian migrants burning to death is a horrific reminder of the dangers migrants face in war-torn Yemen,” Hardman said.

The Iran-aligned Houthi group, which is in control of Sanaa and much of northern Yemen, is fighting a Saudi-led military coalition that intervened in 2015 to restore Yemen’s internationally recognized government. The Houthis have launched an offensive to take the oil-rich Marib province and in recent weeks, have stepped up their attacks on neighboring Saudi Arabia.

On March 16, the coalition accused the Houthis of firing two ballistic missiles that struck an uninhabited part of southern Saudi Arabia on Monday. The Houthis also claimed responsibility for drones fired at the King Khalid air base in the Saudi city of Khamis Mushait.