The former president's son also criticized Congresswoman Liz Cheney in a reference to the Iraq War. The recent US airstrike against Iran-backed militias in Syria has divided both parties. 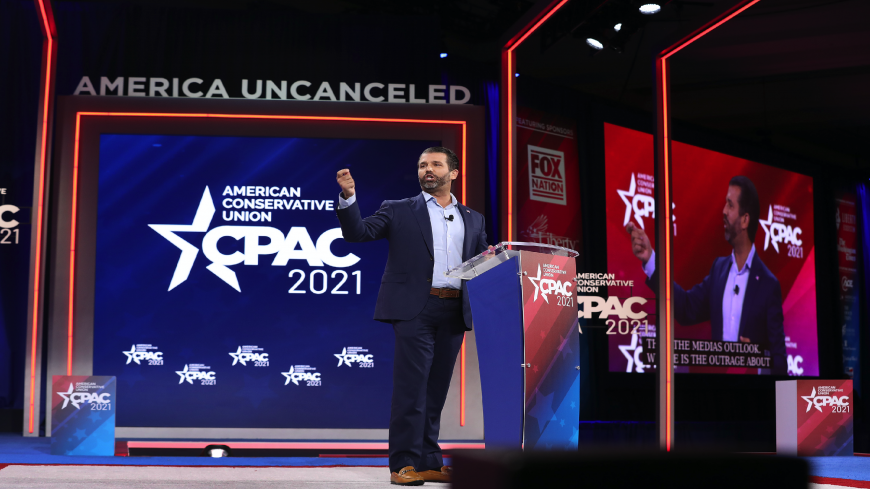 Donald Trump Jr. slammed US President Joe Biden at the Conservative Political Action Conference (CPAC) this weekend over Biden's decision to bomb Syria. The comments by the former president’s son show a divide in the Republican Party on Middle East policy and war.

Not long into his speech at the marquee event for US conservatives, which began Thursday and ended Sunday, Trump Jr. criticized the president for taking military action so early into his first term.

“Who would have thought that within 33 days we’d be bombing the Middle East again? I would have,” said Trump Jr. on Friday. “The military industrial complex? I’m surprised it took them 33 days.”

Trump Jr. referenced the Biden administration’s decision to bomb Iran-backed militias in eastern Syria. On Thursday, the US military conducted airstrikes against Iraqi groups Kataib Hezbollah and Kataib Sayyid al-Shuhada, who are supported by Tehran and also operate in Syria. The strike was in response to recent attacks on US troops in Iraq.

The strike was also criticized by members of both parties in Congress. Republican Sen. Rand Paul of Kentucky, who is known for his anti-war views, condemned the action. So did Republican Sen. Mike Lee of Utah, who said Biden lacked congressional authorization. Various progressive members of congress also slammed the decision and questioned its legal justification, including former Democratic Party presidential candidate Sen. Bernie Sanders of Vermont and Democratic Rep. Ilhan Omar of Minnesota.

Trump Jr. went on to criticize Republican Rep. Liz Cheney of Wyoming. Cheney is the daughter of former Vice President Dick Cheney and is a prominent Republican critic of Trump Jr.’s father. She made headlines last week when she said ahead of CPAC that the elder Trump should not have a role in the party’s future. In his speech, Trump Jr. alluded to her family’s role in the 2003 US invasion of Iraq during George W. Bush’s presidency.

“Speaking of bombing the Middle East, have you seen Liz Cheney’s poll numbers?” he said. “I’m sure she has a lot of bipartisan support because if there’s one thing that she and Joe Biden definitely want to do it's bomb the Middle East.”

Many Republicans are hawkish on Iran and its Middle Eastern allies. Sen. Jim Risch of Idaho, the top Republican on the Senate Foreign Relations Committee, praised Biden for striking the militias in Syria. Other Republicans, including Sens. Paul and Lee, are generally averse to military action in the region without congressional authorization, a view shared by some Democrats as well.

Trump Jr.’s speech was demonstrative of this internal conflict in the Republican Party on Middle Eastern conflicts. The elder Trump frequently criticized the Iraq War and railed against “endless wars” during the 2016 primary election. He continued this theme in 2020 and slammed Biden for voting for the war in 2002. In November, Trump ordered a reduction of US troops in Iraq. In 2017, he ended covert support for Syrian rebels.

Trump did not always follow his anti-war rhetoric, however. At CPAC, Trump Jr. did not mention that his father bombed Syria himself in April 2017 — less than three months into his presidency. Trump also never followed through on his 2019 declaration that he would remove US troops from northeast Syria.

Middle East policy came up at other times during the conference as well. Trump’s Secretary of State Mike Pompeo praised the former administration’s decision to “stay out of wars” during his CPAC speech. He also touted their sanctions on Iran and pro-Israel policies. Former US Ambassador to Israel David Friedman also spoke at the event.