Colin Kahl said he supports the Abraham Accords and continued pressure on Tehran. 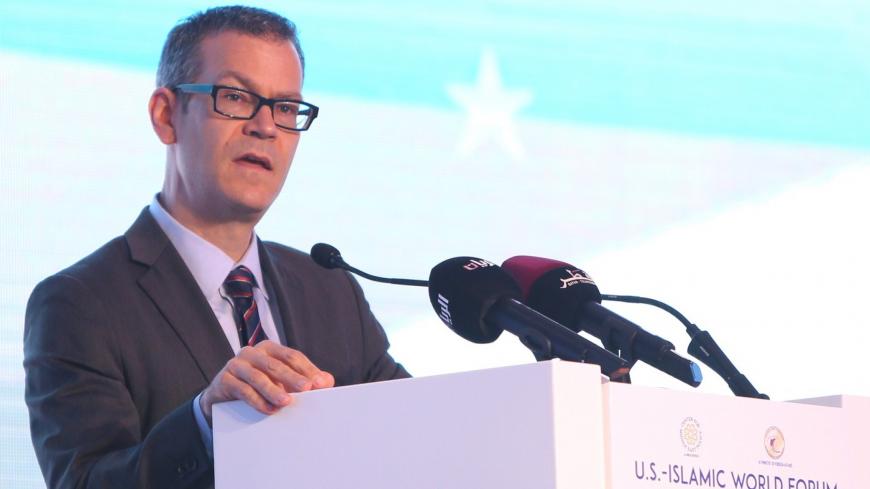 Colin Kahl delivers a speech during a panel discussion as part of the US-Islamic World Forum on June 1, 2015, in the Qatari capital, Doha, when he was Vice President Joe Biden's national security adviser. - AFP via Getty Images

It was the second contentious nomination hearing in two days as Republicans jockey for leverage in opposition to the White House’s plans to reenter into negotiations with Iran over its nuclear program.

GOP members of the Senate Armed Services Committee on Thursday pressed Kahl on Iran policy, the Abraham Accords and — taking a cue from the scuttled hearing of his would-be predecessor Anthony Tata last year — a handful of strident tweets criticizing the Trump administration and the Republican Party.

Oklahoma Republican Sen. Jim Inhofe, the committee’s former chairman and current ranking member, lambasted Kahl for an alleged leak of details in a private phone call between the two to the press. Inhofe concluded by emphasizing his reservations about Kahl, but did not say he would vote against Biden's choice for undersecretary of defense for policy.

Iowa Republican Sen. Joni Ernst slammed Kahl for a 2018 tweet in which he wrote “we’re all going to die” if John Bolton were to succeed H.R. McMaster as President Donald Trump’s national security adviser. Lawmakers also tore into the Pentagon nominee for referring to the GOP in 2019 as “the party of ethnic cleansing” after Trump pulled US forces back to allow Turkey to assault Kurdish-led forces in northeast Syria.

Ernst was joined by Republican Sens. Tom Cotton of Arkansas, who called Kahl’s comments “intemperate,” and Marsha Blackburn of Tennessee, who said Kahl's “inflammatory rhetoric” was “not representative of the way a top policy official at the Pentagon should write about policy.” All three have said they will vote against Kahl’s confirmation.

Kahl, who previously served as national security adviser to Biden when he was vice president and who had a lead role in forming the 2015 nuclear deal, took a conciliatory tone during the hearing, at one point apologizing for what he called his “disrespectful” choice of words in the past.

His hearing follows Wednesday’s grilling of Wendy Sherman, the White House’s pick to become the State Department’s No. 2 official. Sherman previously served as the lead negotiator in the Obama administration's talks with Iran — a role which likewise drew the scrutiny from hawkish senators.

Both Sherman and Kahl acknowledged during their hearings that Iran’s stance in the Middle East has changed since 2015 and that a pivot back to the deal, while necessary, would not be a panacea.

“I remain clear-eyed about the threat Iran poses to our interests and those of our allies,” Sherman said Wednesday.

Kahl on Thursday relied in part on his history of support for the United Staates’ strategic partnership with Israel, including collaboration on defense systems such as the Iron Dome.

“I think dynamics in the Middle East have changed. I support the Abraham Accords and I wouldn’t move the embassy … away from Jerusalem,” he said, also noting that he supports Israel’s airstrike campaign in Syria.

Pressed on Iran, the nominee acknowledged his past objections to the Trump administration’s killing of Iranian Quds Force commander Qasem Soleimani, but said he “did not shed a tear” over the spymaster’s death. “I was concerned about the escalatory dynamics,” Kahl said.

Kahl also leaned on his prior prediction that Iran would increase nuclear enrichment if the Trump administration abandoned the 2015 deal, but insisted the United States should not release Iran from sanctions for terrorism or humanitarian-related issues or on nuclear matters “until Iran is in complete compliance with its obligations under the JCPOA,” the Joint Comprehensive Plan of Action.

When pressed by Inhofe to say he would oppose lifting any sanctions on Iran as long as Tehran continues violent attacks in the region, Kahl said, “We need to get the nuclear program in a box.” He added, “As troubling as Iran’s behavior is — and it is very troubling — it would be exponentially more dangerous if Iran acquired a nuclear weapon.”

Kahl said that he does not believe sanctions should be lifted on Iran's ballistic missile program, and that the Biden administration should work to reduce Tehran’s conventional stockpiles through diplomacy.

His support for the White House’s stated intent to “recalibrate” US relations with Saudi Arabia following the murder of Jamal Khashoggi and the catastrophic war in Yemen drew little objection among lawmakers.

Echoing the Biden administration on arms sales, Kahl said foreign transfers "need to be aligned not just with our national interests, but with our values."

Despite substantial attention to Middle East policy during Thursday's hearing, the Biden administration is seeking to focus US leverage elsewhere in the world.

Kahl on Thursday suggested the United States should prioritize the Indo-Pacific region, Europe and the Western Hemisphere in the coming years as China moves toward military modernization and Russia seeks to pick up influence abroad.

“I think we need to right-size our presence in the Middle East and Central Asia,” Kahl said. If confirmed, he will likely be in a position to recommend if, and how, that should be done.