Despite warnings by human rights groups, the previous US administration designated Yemen’s Houthis a terrorist organization, which locals fear will only add to their misery. 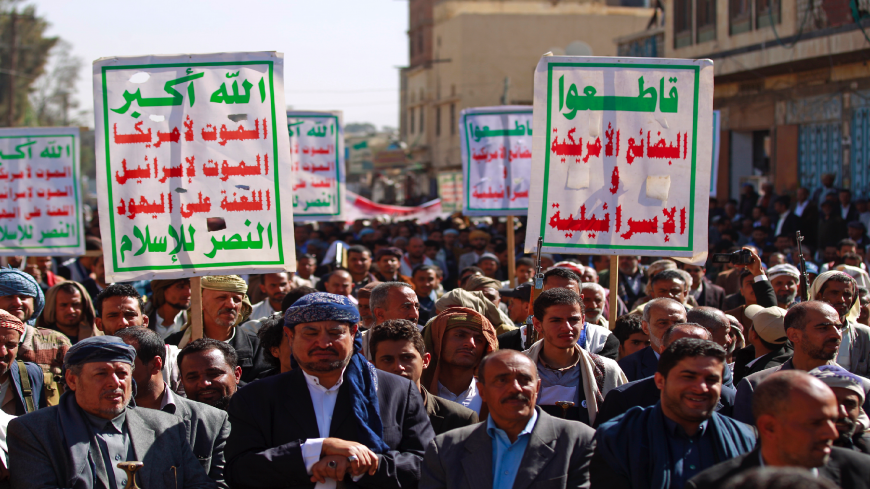 Supporters of Yemen's Houthi movement chant slogans during a demonstration against the outgoing US administration's decision to designate the Iran-backed rebels as terrorists, in the capital, Sanaa, on Jan. 20, 2021. - MOHAMMED HUWAIS/AFP via Getty Images)

A correspondent in Yemen
February 1, 2021

SANAA, Yemen — Yemen's Houthi group, officially known as Ansar Allah, is presently among the organizations the United States designates as terrorists. One day prior to new US President Joe Biden's inauguration, US Secretary of State Mike Pompeo declared the Houthis a terrorist organization, unleashing conflicting sentiments in Yemen and abroad.

On the local level, Yemenis are divided. Some welcomed the news, deeming it a step in the right direction. Others reacted with fury, calling it an extension of America's war on Yemen. On Jan. 25, thousands of protesters took to the streets in the Houthi-held capital, Sanaa, denouncing the former US administration's resolution listing the Houthi group as terrorists.

Houthis have showcased defiance in reaction to the US labeling, saying it will have no political or military influence. Houthi spokesman Mohammed Abdulsalam believes this US move will not hinder peace talks. “We will not stop our efforts to reach peace in Yemen … it is our responsibility to talk, to end the war and the blockade,” he said in a statement on Jan. 14.

However, the consequences of their designation as a terrorist organization will be inevitable. It is a new chapter in suffering among Yemen citizens. Abdulsalam, a 45-year-old resident in Sanaa, told Al-Monitor the US designation of the Houthis is a matter of concern because it will add to civilians' suffering. “We have been under blockade since 2015. And now new restrictions will start. I feel worried about the repercussions of the US designation,” he said.

Sanaa resident Abdulsalam, who asked that only his first name be published due to security concerns, runs a grocery shop as his source of income. He understands the majority of the commodities in his shop are imported from outside Yemen. Such a reality sparked questions in his mind. “Will imports continue to reach Houthi-controlled provinces smoothly? Will aid and food imports be exempted from restrictions? And who can guarantee that importation of such supplies will not be hindered?”

His worry does not seem to be an unfounded fear of the future. However, it is a concern of aid organizations operating across Yemen. On Jan. 24, 22 humanitarian organizations, including the International Rescue Committee, Save the Children and Oxfam, called on the new US administration to override the former administration's resolution. A joint statement by these organizations said, “This designation comes at a time when famine is a very real threat to a country devastated by six years of conflict, and it must be revoked immediately. Any disruption to lifesaving aid operations and commercial imports of food, fuel, medicine and other essential goods will put millions of lives at risk."

Leila Amri, a schoolteacher in Sanaa, said the US designation of the Houthis is an additional agony to Yemen's people. Speaking to Al-Monitor, she said, “The certain thing is that the warlords in the country will not suffer from this move. It is only the civilian population that will bear the brunt. We have been experiencing constant fuel shortages over the last five years, which has made life worse. And now blacklisting the Houthis will certainly affect the lives of millions of people under their rule.”

She added, “I neither support nor protest the US designation. I just do not want to see people drown in further misery.”

Though some civilians have shown their worry about the potential consequences of designating the Houthis a terrorist organization, others have said the definition of terrorism applies to the Houthi movement.

A human rights activist residing in Sanaa told Al-Monitor the Houthis are not different from any other terrorist groups such as al-Qaeda or the Islamic State (IS). Declining to be named for fear of reprisal, he said, “It is not hatred to say that Houthis do not differ from other terrorist groups. I live in Yemen, and I know what they have done. If their actions do not mount to terrorism, what else could terrorism be?”

Telling a story of what he describes as “Houthi extremism,” the activist said, “Lately, the Houthis have raided restaurants that employ women, claiming that the work of women in such places contradicts our religious identity. But if these women die of hunger or go begging, that would not be a sin in their eyes.”

The activist also told another example of the group's radicalism. “They raided women's clothing shops that display mannequins, claiming that displaying such shapes 'is not in compliance with our faith.' They not only want to rule us but also impose on us what to do, how to think and how to live.”

Over the last five years, Houthis have heightened their dominance of areas under their control. They have silenced critics and shown no tolerance to dissidents. Living circumstances have been dire due to the war and the blockade imposed by the Saudi-led coalition. The recent US designation is a fresh dose of suffering for the people in Yemen.

Khalil al-Omary, editor-in-chief of the news website Rai Alyemen, argues that the US labeling of Houthis as a terrorist organization will not leave an enormous impact on civilians' lives in Yemen. Omari told Al-Monitor, “The Houthis have been robbing humanitarian aid to fund their war effort. This is not my opinion; it is a fact substantiated by the UN report. Houthis have taken over at least $1.8 billion in 2019, and this amount was supposed to help pay salaries of public employees and provide basic services to the people.”

Sanaa's Abdulsalam is not good at politics and cannot predict the future, he admits. But he cannot conceal his pessimism about the situation. “We hope for peace, but we do not expect it soon. This new US designation of Houthis is not good news for Yemen and its people. Our ordeal seems to last long,” he said.