Amid an already frosty start with the new US administration, Ankara has renewed accusations that Washington was behind the 2016 coup attempt in Turkey. 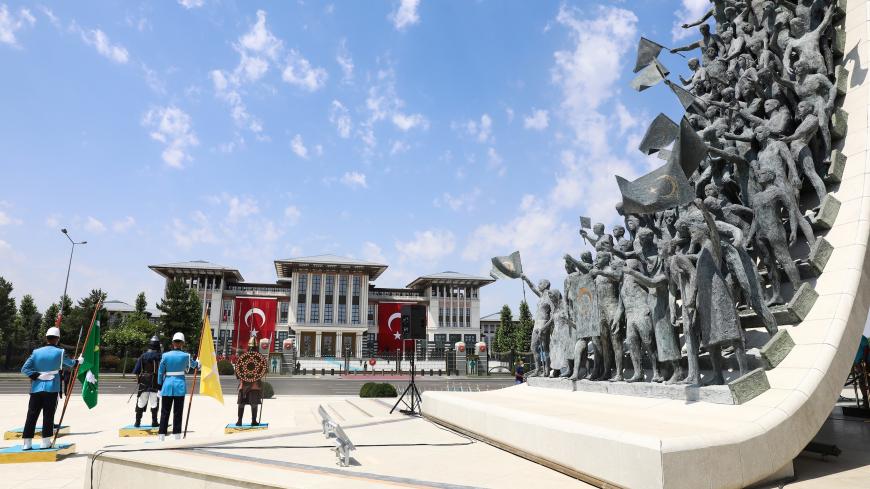 A photograph taken on July 15, 2020, shows the July 15 Monument in Ankara during Democracy and National Unity Day events marking the fourth anniversary of the 2016 coup attempt. - ADEM ALTAN/AFP via Getty Images

A senior Turkish minister has rekindled accusations of US involvement in the 2016 coup attempt in Turkey even as Ankara is trying to mollify Washington over its purchase of Russian missiles and avoid more sanctions under President Joe Biden. Fence-mending remains a distant goal with the Turkish public still largely convinced that Washington was behind the putsch.

Rogue officers accused of having links to US-based preacher Fethullah Gulen, an ally-turned-foe of President Recep Tayyip Erdogan, commandeered warplanes and tanks July 15, 2016, in a bid to topple the government. Some 250 people were killed and more than 2,000 wounded before the government suppressed the uprising the following day. Squabbles over the coup, coupled with US support for Syrian Kurdish militias seen as terrorists by Ankara, opened a major rift between the two NATO allies, leading Turkey to move closer to Russia. Ankara has repeatedly criticized Washington for failing to extradite Gulen, having designated his extensive network of followers as a terrorist group, known by the acronym FETO.

Interior Minister Suleyman Soylu rekindled the spat in early February, just as Ankara was making overtures to the Biden administration, which is expected to be tougher on Turkey than its predecessor. “It’s plain as day that America was behind the July 15 coup attempt. FETO carried it out at their behest,” Soylu told Hurriyet. “Since I became interior minister [in September 2016], I’ve seen FETO's presence wherever America is influential,” he said.

US State Department spokesman Ned Price promptly rejected Soylu’s allegations as “wholly false.” Such “unfounded and irresponsible claims of US responsibility for events in Turkey are inconsistent with Turkey’s status as a NATO ally and strategic partner of the United States,” he said.

Despite the American denials, public opinion polls show that a majority of Turks remains convinced that the United States had a hand in the 2016 putsch and earlier military coups in Turkey. Mehmet Ali Kulat, head of the research and consultancy company MAK, told Al-Monitor that 70% of respondents believed so in the company’s December survey on the issue. The rate had shot up to 81% in September 2016 after the coup and has fluctuated between 67% and 73% since then, he said.

According to Kulat, Turkish officials and the Turkish media are not the only influences shaping such perceptions. “Having witnessed US interventions in the name of bringing democracy to the Middle East, the Turkish people see the perpetrators of coups as subcontractors and the United States as the real culprit,” he said. That Gulen and some of his senior cohorts continue to reside in the United States and “under US protection” has only reinforced such perceptions, he added.

Onur Oymen, a former Turkish ambassador to NATO and a former parliament member, said that controversies over the US role in regime changes and military coups in other countries have swayed Turkish perceptions. He gave as an example the memoir of retired Gen. Wesley Clark, who recounts how a US general told him of plans “to take out seven countries in five years” in the wake of 9/11, in addition to accounts by former US officials indicating that Washington knew in advance of the 1960 coup in Turkey and tacitly welcomed the one in 1980.

According to Oymen, some in Washington were apparently unhappy that the 2016 coup attempt failed. “This, of course, does not mean that the United States orchestrated or directed the putsch. One cannot make such conclusions without hard evidence. What matters for us are the official statements,” he said, recalling that then-President Barack Obama denied any US involvement and Biden, then vice president, visited Ankara in a show of solidarity the following month, apologizing for not coming earlier.

Oymen also recalled that Biden, in an interview before his election as president, described Erdogan as “an autocrat” and advocated support for the opposition in Turkey “to take on and defeat Erdogan” but “not by a coup, but by the electoral process.” According to Oymen, “People hear those things on television and few in the world would believe anyone who says that big states would not do such things.”

Huseyin Bagci, a professor of international relations at Ankara’s Middle East Technical University, said the Turkish public believes what Soylu says, no matter what the truth might be. “I don’t think that this perception will change in the foreseeable future,” he told Al-Monitor. Nevertheless, reversing perceptions is not impossible, he said, recalling how former President Bill Clinton won the Turkish public over with his visit after a devastating earthquake in 1999, including the memorable moment when he held a baby that pulled and twisted his nose.

Washington’s failure to extradite Gulen continues to nourish negative perceptions in Turkey, Bagci said, suggesting that Soylu’s remarks were intentionally timed. “It seems that Turkey made a move on the chessboard, telling [Biden], ‘You hold responsibility. You were part of the Obama administration, so let’s negotiate this.’ I think it was a good move in this context. Then, 54 senators criticized Turkey [in a letter to Biden]. Such mutual countermoves could well lead to negotiations,” he said.

According to Unal Cevikoz, a former Turkish ambassador and now a senior member of the main opposition Republican People’s Party, the government’s control of the media has made it easy to nourish the perception that Washington orchestrated the 2016 putsch, atop the multiple crises in bilateral ties. “Both sides have erred,” he said.