Turks lose trust in Russia, warm to US

The Turkish public’s trust in Russia has declined in favor of the United States due to the rising conflicts between Ankara and Moscow over the Libyan and Syrian civil wars, according to a survey. 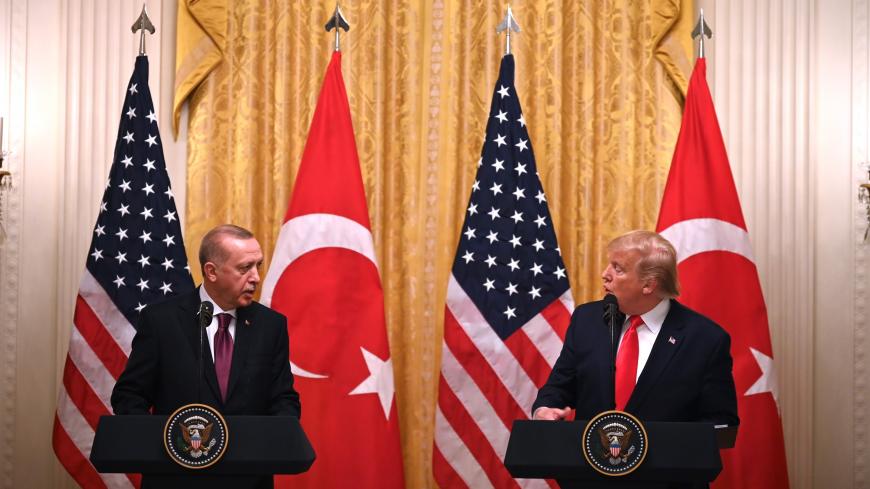 US President Donald Trump and Turkey's President Recep Tayyip Erdogan (L) take part in a joint press conference in the East Room of the White House in Washington, DC, on Nov. 13, 2019. - JIM WATSON/AFP via Getty Images

The Turkish public’s trust in Russia has declined while trust in the United States has increased, a public opinion poll published this month shows, revealing the impact of the conflict between Ankara and Moscow’s regional policies.

The “Turkish Foreign Policy Public Perceptions” survey conducted by Istanbul's Kadir Has University in April found that support for Russia declined by 14 percentage points from last year as the number of people who see Russia as a threat jumped to 55% from 44.2% in 2019. In parallel, the poll suggests that the overall trust in the United States has increased. The number of people who see the United States as a threat declined by some 11 percentage points, decreasing 70% from 81.3% in 2019.

The United States’ support for the Syrian Kurdish Democratic Union Party (PYD) and the Washington administration’s policies vis-a-vis the Kurds in the Middle East were the top two answers from respondents about what they saw as the most important problem in ties between the two NATO allies. Washington’s support for the PYD was the top reason for distrust at 34%, while 27.2% of respondents pointed to the United States’ "Kurdish policies in the Middle East.”

Turkey sees the PYD and its military arm the Syrian Kurdish People’s Protection Units as terrorist organizations and wants the United States to designate them as such. Yet the Kurdish groups remain the United States' most reliable ally in Syria.

There might be a correlation between the decline in the distrust and the personal ties between Turkish President Recep Tayyip Erdogan and US President Donald Trump, according to Mustafa Aydin, the coordinator of the survey and professor of international relations at Kadir Has. Yet the current positive outlook in the bilateral relation might be cosmetic, Aydin warned.

“There are important problems between Turkey and the United States, but Trump is able to act as if these problems do not exist thanks to his personal relations,” Aydin told Al-Monitor. “Despite these results, it is difficult to expect a lasting positive change.”

As for relations with Russia, Aydin believes the ties between Ankara and Moscow are a better fit for cooperation. “Despite ups and downs, the relationship seems like it will continue based on both cooperation and rivalry,” Aydin said, adding that support for rival parties in Syrian and Libyan civil wars contributed to the results of the survey.

The results reflect the developments over the past three months, Aydin said, pointing out that Erdogan’s recent positive messages about the United States have also been influential. Earlier this month, Erdogan said Turkey and the United States are headed for a “new era” in their relations following his phone conversation with Trump on June 7.

Another striking result of the survey was a five-point decline in the public’s support of NATO. Yet, Bagci does not find the change very significant, as the majority of the respondents said that the Turkish government would not leave NATO.

“Leaving NATO means becoming a third world country in regards to security,” Bagci said. “No government would risk it.”

The survey revealed that public perception of the foreign policy is not balanced, as knowledge of foreign policy matters is dependent on reporting by the Turkish press, which is “not free,” and Erdogan’s remarks, according to Unal Cevikoz, deputy chair of the main opposition Republican People’s Party and a former diplomat.

“The president is always on the screen. Thus, these two factors have been determinant in shaping the public perception of the foreign policy,” Cevikoz told Al-Monitor, adding that 69% of the respondents consider Erdogan the person with the last word in foreign policy.

Erdogan’s criticism of Washington over its alliance with the PYD has subsided recently. “This, of course, has a role in the decline of both trust in Russia and distrust in the United States,” according to the former diplomat.

Ozgur Ozmadar, assistant professor of international relations at Bilkent University, meanwhile, believes that the survey reveals the public's grasp of foreign policy developments. According to Ozdamar, the deep-rooted anti-Americanism among the public may diminish if the conflicts between Ankara and Washington lessen.

“I can say that Turkey’s public opinion has been for the middle road when it comes to foreign policy,” Ozdamar said. “The presumption that democracy and a well-functioning market economy are the best remedies for the political-economical struggles Turkey faces can explain the increasing approval of the Western institutions,” he added.

The poll also spotted a change in Turks’ perception of Turkish identity. Those who see Turkey as a primarily Islamic country have decreased by some 34% in two years, declining from 56.3% in 2018 to 22.4% in 2020.

A loss of support for the ruling Justice and Development Party and its Islamic outlook might explain the results, according to Aydin.

“The overall results of the survey indicates an important shift in Turkey’s axis from the East to West,” Aydin said. “We don’t know if it’s a permanent change, but I don’t expect this trend to [stop].”

Bagci says the results are not surprising. “There is disappointment toward the Arab world. Turkey is a European country,” he said. “I’m not even a bit surprised. What has been going on in the name of Islam began drawing angry reactions from the public.”

Cevikoz thinks the results show that the public has begun to associate more with the West than with the Islamic world.