After the deaths of 13 Turkish captives in Iraqi Kurdistan during a raid against Kurdish militants, Turkey might be weighing an offensive against Sinjar, but vocal objections by pro-Iranian groups heavily deployed in the area are bound to complicate such a mission. 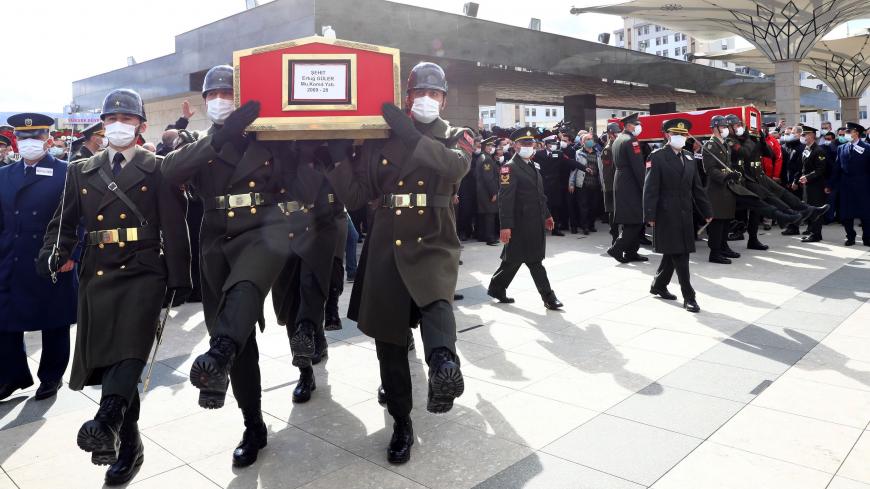 The coffins of three Turkish military personnel killed in action are carried during funeral prayers at the Ahmet Hamdi Akseki Mosque in Ankara on Feb. 12, 2021. - ADEM ALTAN/AFP via Getty Images

Turkey’s latest cross-border raid has failed, but President Recep Tayyip Erdogan seems determined to make use of the killings of 13 Turkish citizens whose remains were discovered in a cave in the Gare region in northern Iraq, where outlawed Kurdish militants are based.

The question of why the Turkish government had taken no action to rescue the hostages held by the Kurdistan Workers Party (PKK) over the past five years despite numerous pleas by their families has gone unanswered. Yet Erdogan has already turned the tragic incident into a propaganda tool in both domestic and international politics.

At home, Turkish authorities have unleashed a fresh crackdown on members of the pro-Kurdish People's Democratic Party, detaining some 700 people amid growing calls from Erdogan’s far-right nationalist ally for a total political ban on the party.

More widely, the tragedy seems to have provided suitable ground for Erdogan to press ahead in Turkey’s talks with Baghdad and the Kurdistan Regional Government to cleanse Sinjar of the PKK, which is considered a terrorist group by Turkey and the United States.

“From now on, nowhere is safe for terrorists, neither Qandil nor Sinjar or Syria,” Erdogan said Feb. 15, speaking at a rally for his ruling party in the Black Sea province of Rize. “You must not take the side of the terrorists. You have to be on our side,” he said, also lashing out at Washington for its support to the Syrian Kurdish groups that Turkey considers terrorists.

He reaffirmed his resolve a day later. “Gare has strengthened our determination to establish a secure zone beyond our borders,” he said. “We will extend our operations to areas where danger exists. We will stay in those areas we secure as long as necessary.”

Erdogan’s ruling Justice and Development Party and its de facto ally the far-right Nationalist Movement Party are seeking to turn the Gare raid into a rallying cry in both domestic and international politics. While local observers believe the Gare raid has paved Ankara's way to a Sinjar push, the prospect is alarming the Iraqi side, particularly pro-Iranian factions of the Popular Mobilization Units.

Hadi al-Ameri, leader of the Fatah Alliance and head of the Badr Organization, was the first to speak up from this front. He said that they had received information about a looming Turkish offensive against Sinjar and called on Iraqi Prime Minister Mustafa al-Kadhimi to take action.

Turkish Defense Minister Hulusi Akar reportedly told Iraqi and Kurdish officials that the Turkish army is ready for the operation during his visit to Baghdad and Erbil last month. According to Turkish media reports, Akar offered two options to the parties: A tripartite operation with the participation of Turkish, Iraqi and peshmerga troops or a joint operation by Iraqi troops and peshmerga with Turkey’s logistic and intelligence backing. Akar is said to have specifically asked for the capture of nine targets that were identified as five general training bases, a pilot training center and three logistics bases. He also reportedly gave a date for the first option: March 21.

Turkey has been pondering various military scenarios for Sinjar — also known as Shingal — since September, yet its joint military operation ambitions are not limited to the Yazidi enclave. After ending the control of the PKK-affiliated Shingal Resistance Units (YBS) in the region, Ankara aims to expand its foothold to the north in a bid to control the 50-kilometer (30-mile) border between the Yarubiyah and Fish Kabur crossings along the Iraqi-Syrian border. This will allow Turkish troops to encircle the Syrian Kurdish groups from the east as well as cut the connections between the Syrian Kurdish groups and the PKK. Thus the total length of the planned Turkish security zone reaches 160 kilometers (100 miles) from the Turkish-Iraqi border southwest to Sinjar. Turkey asked for the Iraqi authorities' permission to set up one or two new deployment sites west of Mosul, but such permission remains as a tall order given Baghdad’s increasing discontent over the Turkish military presence at the Bashiqa base east of Mosul.

The Iraqi Kurdish administration, which also considers the PKK presence in its soil a threat, is said to have been pondering Akar's second option. Kadhimi, for his part, seems reluctant about Turkey getting involved in a possible Sinjar operation amid vocal objections from pro-Iranian PMU factions.

Although Amiri’s warning forced Gen. Tahseen al-Khafaji, a spokesman for the Iraqi Joint Operations Command, to deny having any plans for a joint operation, some developments on the ground indicate that the Iraqi authorities are seriously considering the possibility. The Shafaq news agency reported that the number of PMU factions deployed around the region have increased significantly in the past months as PMU commander Mohammed al-Basri claimed that they were under instructions from Iraq's chief of general staff to counter any Turkish push to Sinjar.

Rudaw reported that three PMU brigades from Mosul, Najaf and Karbala were recently transferred to Sinjar to reinforce the area to the east and to the west. “Neither Turkey nor the PKK nor any other party can threaten us,” Abbas Ali, a Badr Organization commander, was quoted as saying during a visit to the PMU bases in the region. A prominent pro-Iranian faction, Asaib Ahl al-Haq, has reiterated its demand for Turkey to withdraw its troops from Iraq. Al Nujaba has threatened “to respond in the strongest possible manner” if Turkey doesn’t end its trespass on Iraqi soil. A lesser known group, Ashab Ahl al-Kahf, claimed that it launched a rocket attack on Turkish forces at Bashiqa, declaring, “Turkey’s economic and security interests in Iraq” would be burned down if the trespass continues. The leader of the group said Turkey’s position on the ground could become shakier than that of the Americans.

The furor among the pro-Iranian groups can be seen as manifestation of Iranian preferences in Iraq. As the new US administration has yet to clarify its position on the matter, the Sinjar file appears to have already placed Turkey at odds with Iran. Citing a Telegram account allegedly linked to the Iranian Revolutionary Guard Corps, some social media accounts have even claimed that all pro-Iranian factions pledged to take action against a possible Turkish move in Sinjar.

The Iraqi Kurds share similar concerns that Turkey might be seeking to expand its influence under the cover of combatting the PKK amid growing prospects for a Turkish military push against Sinjar.

Turkey’s military calculations over Sinjar aim to dissolve the YBS, which is comprised of Yazidi fighters and was formed and trained with the support of the PKK, one of the few groups that rushed to the aid of the people during the Islamic State attack in 2014. In the ensuing years, the YBS collaborated with the PMU in the fight against IS with some fighters entering the federal government's payroll. In response to increasing Turkish threats, the PKK claimed that it had withdrawn from the region and some YBS units joined the PMU ranks. An agreement was struck between Baghdad and Erbil for the removal of the PKK and PMU factions from the region in October. US encouragement and Turkish incursion threats are said to have cajoled Kadhimi into accepting the deal, which entails deployment of federal forces into Sinjar. Yet the deal hasn't produced the desired outcome for Ankara.

Turkey’s threats, meanwhile, have boosted PMU efforts to expand its foothold in the region. Currently, the PMU has some 20,000 to 30,000 troops deployed in and around Sinjar. Pro-Iranian militias’ rising status in the region comes in line with Iranian efforts to increase Tehran's influence across Iraq against the United States and undermines the Iraqi Kurdish administration’s efforts to return to Sinjar, the status of which remains disputed between Erbil and Baghdad.

Military risks aside, Turkey needs to consider the diplomatic and political ramifications of a military offensive against the Yazidi enclave, as it could trigger a harsh reaction from the new US administration and international community.