Syrians are reluctant to apply to the technical training centers the regime plans to establish because of the shockingly low stipends provided. 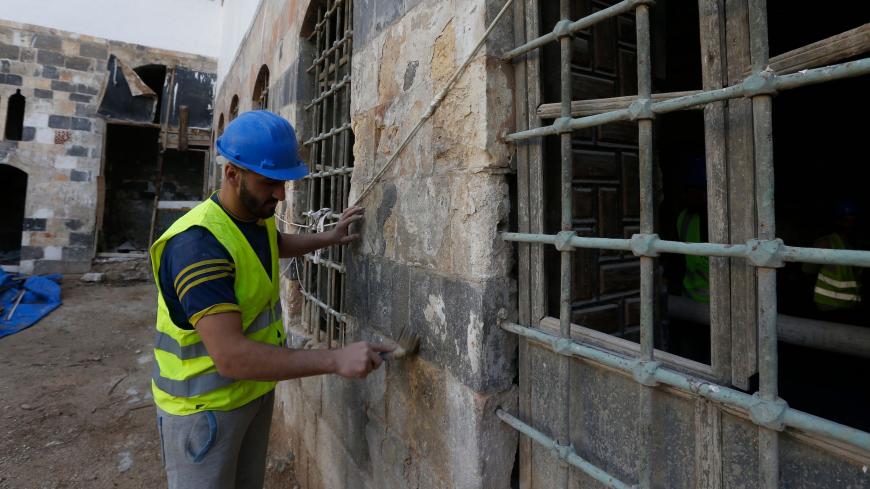 Workers restore a palatial Ottoman-era home called Beit al-Quwatli, which will become a cultural institution in the old part of Syria's capital Damascus, on Nov. 10, 2020. - LOUAI BESHARA/AFP via Getty Images

According to the new law, the training centers aim to provide the job market with competent technical staff that will raise productivity, boost the construction sector’s contribution to Syria's gross domestic product and improve the quality of construction works.

The law set a monthly salary of 10,000 Syrian pounds ($3 at the black market rate) for trainees during their training period. The low rate angered construction contractors as well as unemployed youths in light of the crippling economic situation in Syria.

Abed al-Asmar, a university student from al-Zabadani in Rif Dimashq who moved to the capital Damascus after his house in al-Zabadani was destroyed, said that the law shocked and angered him. He told Al-Monitor, “The monthly stipend set by the law is not enough to pay for one meal at a cheap restaurant in Damascus. A bowl of soup costs 15,000 Syrian pounds [$5]. Each family in Damascus needs $500 per month to be able to make ends meet. The Syrian pound is collapsing every day and the prices of foodstuffs and medication are soaring. How can a trainee survive a whole month on 10,000 Syrian pounds?”

Sabri Jaber, a pseudonym for a young man who has been looking for a job for six months now, applied on Feb. 7. He told Al-Monitor, “An official receiving applications informed me about preparations to open a training center in Rif Dimashq.”

He said, “Although the law is unjust in terms of the salary allocations of 10,000 Syrian pounds, I have lost hope of finding a job. I applied for the training, hoping I can learn the profession of construction, and it might open doors to me in the future with a construction company in return for a better salary.”

The new law comes at a time when construction material prices in Syria are soaring. Real estate prices have consequently increased and it is nearly impossible for most Syrians to own property.

Jalal Merdem, an unemployed man from Homs and living in Damascus, said that he worked in construction with his brother-in-law, who is a construction engineer, in Damascus in 2020. He said, “In three months, I learned the profession of construction and earned 1.5 million Sryian pounds [about $500]. I think there won’t be many applicants for the technical training because the pay is quite low.”

Syrian authorities said in late 2019 that contracts for reconstruction will go to friendly countries, mainly Russia, Iran and China. But many observers warn that reconstruction is far off with no political solution expected soon.