The sentences of Ali al-Nimr, Abdullah al-Zaher and Dawood al-Marhoon, who were arrested as teenagers in 2012, were reduced to 10 years in prison. 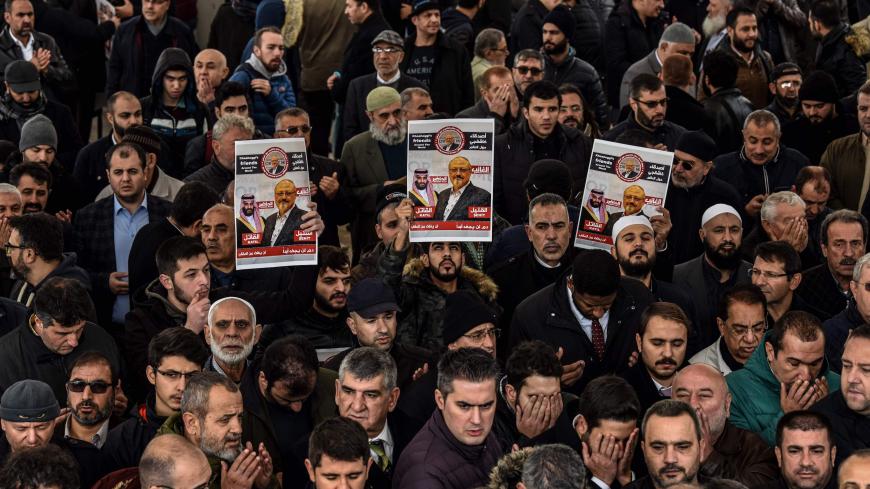 People hold banners of Jamal Khashoggi during a symbolic funeral prayer for the Saudi journalist, killed and dismembered in the Saudi Consulate in Istanbul in October, at the courtyard of Fatih mosque in Istanbul, on Nov. 16, 2018.

Saudi Arabia has commuted the death sentences of three Shiite men arrested nearly a decade ago for taking part in anti-government protesters when they were teenagers.

Ali al-Nimr, Abdullah al-Zaher and Dawood al-Marhoon had their sentences reduced to 10 years in prison, according to the state-backed Saudi Arabian Human Rights Commission. They are scheduled to be released in 2022.

The three men were arrested in 2012 on terrorism-related charges after participating in anti-government protests in Saudi Arabia’s Eastern Province. Al-Nimr was 17, Al-Marhoun was 17 and al-Zaher was 15.

The Specialized Criminal Court, which handles terrorism cases in Saudi Arabia, sentenced the three men to death in 2014 in what rights groups said were highly flawed trials that relied on torture-induced confessions.

The commission said their new sentences were in line with a royal decree that “retroactively applies the Juvenile Law to all individuals sentenced to the death penalty for crimes committed while they were minors.”

In April King Salman ordered the resentencing of prisoners on death row for crimes committed before they were 18 and set the maximum penalty at 10 years in a juvenile detention center. The next month, Riyadh announced it was ending the use of flogging as a punishment for certain crimes.

“The authorities must ensure this marks a definitive end to the practice of sentencing juvenile offenders to death regardless of the nature of the crime, and must build on these reforms by taking steps towards abolishing the death penalty completely for all crimes,” Maalouf said.

The conservative Muslim kingdom had long been a world leader in capital punishment. After carrying out a record 185 executions in 2019, Saudi Arabia executed 27 people in 2020, according to government figures.

The Saudi government’s mass executions and human rights record were thrust into the spotlight after the 2018 murder of Washington Post journalist Jamal Khashoggi at the Saudi Consulate in Istanbul. A Saudi court originally ordered the execution of five people convicted of Khashoggi’s murder, but after the journalist's son said he forgave his father's killers, the court reduced their sentences to 20 years in prison.