The VeryNile initiative has been working since 2018 to remove plastic waste from the Nile River and has launched a project to support the fishermen of Cairo by providing them with additional income and access to health services. 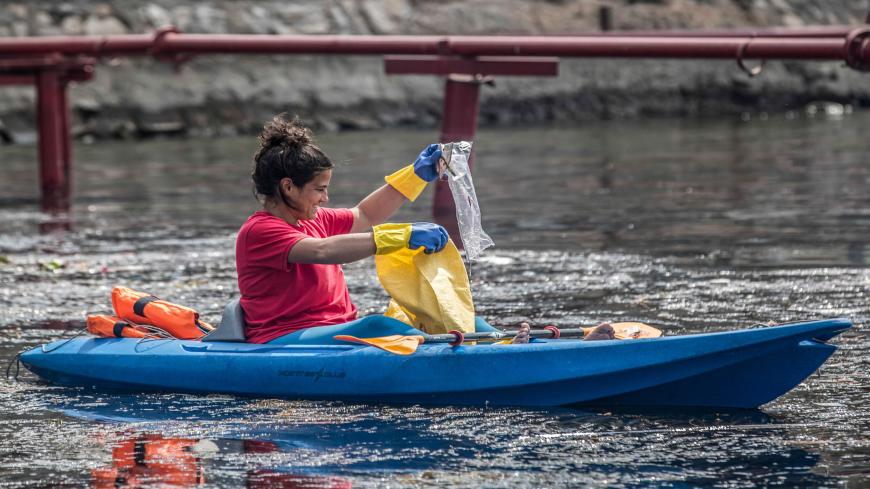 Volunteers riding in kayaks take part in a water-waste removal and cleanup campaign of the Nile River off the island of Manial, Cairo, Egypt, March 7, 2020. - Khaled Desouki/AFP via Getty Images

CAIRO — While negotiations over the Grand Ethiopian Renaissance Dam (GERD) have been brought to a standstill, Cairo is channeling its efforts to preserve the waters of the Nile by supporting local initiatives, such as VeryNile to remove plastic waste from the river, the main source of fresh water in arid Egypt.

With the support of Egypt’s Ministry of Environment and nongovernmental organizations (NGOs), VeryNile started its activities in 2018 under the slogan “Cleaning the Nile, one kilo at a time.” In recent weeks, the media has praised the initiative after removing tons of medical and plastic waste from the water and employing fishermen, who have been hit hard as pollution kills the fish.

The co-founder of VeryNile, Mostafa Habib, told Al-Monitor over the phone that they have managed to collect 52 tons of solid garbage, including 15 tons of plastic waste, from the Nile River so far. He said that they are about to get a boat from donors to sail the Nile from south to north to collect plastic waste.

To achieve the campaign's goal of making the Nile River 100% free of plastic, the initiative's founders also launched a project to improve the lives of fishermen by providing them with additional income from garbage collection and recycling operations. In addition, they established a campaign to raise awareness among Egyptians about the risks of throwing plastic garbage into the river, including the Nile Environmental Education Program for school students to reduce the use of single-use plastic bags.

“Despite our continuous cleaning of the Nile, this is still not sufficient to get rid of waste. So we also started a campaign to encourage cafes and shops in the areas surrounding the river to stop using single-use plastic bags. So far 150 stores have joined us in this initiative,” Habib noted.

Not only are Habib and his colleagues working on the thorough cleaning of the Nile River within Egyptian territory, but they are also in contact with initiatives in Uganda and Rwanda to clean up the river, which passes through 11 African countries. The campaign states, “The Nile is one of 10 rivers that contribute 90% of the plastic that ends up in the oceans."

Habib added, “Fish in the river are also affected by plastic waste. The fishermen who have joined our initiative told us that in the past the amount of fish caught in the Nile was much more than it is now."

Last year, a study published by the University of Oslo showed that many Nile fish had ingested microplastic particles. “Fish were purchased from local sellers in Cairo, and then their gastrointestinal tracts were dissected and examined for microplastics … over 75% of the fish sampled contained microplastics in their digestive tract,” the research found.

It is also likely that Cairo's share of water will decrease once the GERD, which Ethiopia is building on the Blue Nile, is operational. Despite Egypt's attempts for years to reach an agreement with Addis Ababa to ensure an adequate water quota for its residents, negotiations have not resulted in any settlement yet.

Egypt's media coverage of the uncertainty surrounding the waters of the Nile drew Egyptians' attention to the GERD negotiations. “When we felt the danger of being exposed to water scarcity, citizens' awareness has begun to increase dramatically, and the state is still working to educate all individuals at all levels,” Ali Abu Senah, assistant to the Egyptian Minister of Environment for Projects, told Al-Monitor.

Abu Senah said, “Plastic waste does not directly affect the quality of the water according to the results of the monitoring. But it causes damage due to the accumulation of garbage in dams and bridges on the course of the Nile, which puts a great financial burden on the state in the cleansing work.”

He added, “The ministry is currently working on issuing a national strategy to limit the use of single-use plastic bags and planning to form a technical committee to discuss alternatives to plastic materials.”

In addition to the awareness campaigns that VeryNile carries out among Egyptians, the Egyptian Ministry of Environment is also working to engage universities in raising awareness about the harmful effects of plastics and to support NGOs and initiatives that implement Nile cleanup operations. “The ministry is working intensively with NGOs to complete the plan of making the Nile 100% plastic free,” Abu Senha concluded.