Would Israel limit use of plastic disposable tableware?

Israel's Finance Ministry is considering taxation of disposable dishes and tableware to curb the enormous use of plastic in the country. 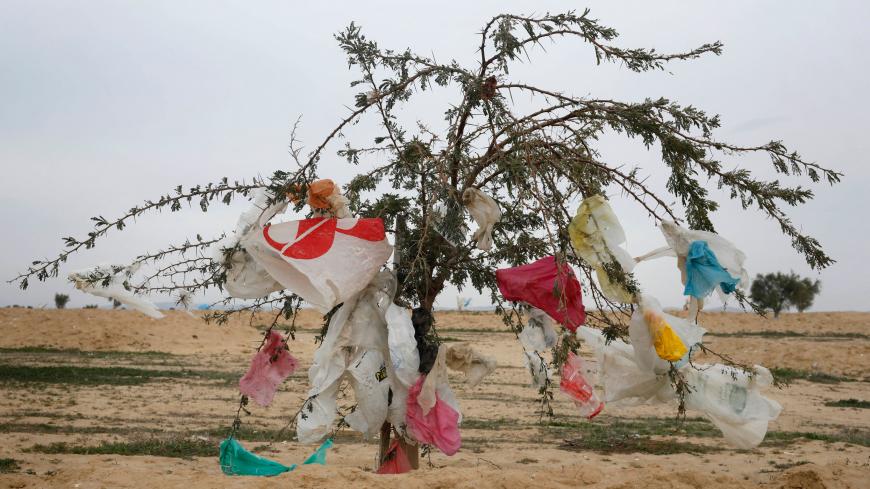 Israelis are among the world's top users of disposable dishes and cutlery. According to an April report by the Israel Union for Environmental Defense, Israelis spend some 2 billion Israeli shekels ($574 million) annually on single-use dishes. The environmental organization Green Course claims Israel is the world’s second top user per capita of single-use plastic after the United States. This data turns Israel into a senior partner in global plastic pollution.

According to Israel Aviav, co-founder and CEO of WinPac, one of Israel’s biggest importers of single-use dishes, Israelis consume the largest number of plastic cups per capita in the world. "I say this based on 10 years of experience in the field," Aviav was quoted as saying to Calcalit newspaper.

Israelis use more than 250 million disposable cups a month. Ministry of Environmental Protection data obtained by Al-Monitor says Israelis use 1.3 million tons of plastic annually, most of which is dumped in the trash.

Israeli environmental organizations have been waging a stubborn campaign against plastic waste, virtually without government or public feedback. In early September, some encouraging news emerged about the efforts in that direction. According to various news reports, the Finance Ministry is considering a proposal to increase taxation of single-use plastic items. “The use of disposable plastic is a dramatic phenomenon globally. Imposing a tax will limit its use and lead us to a better value-based and cleaner society,” Budget Department head Shaul Meridor was quoted as saying.

Dr. Adi Levi, scientific director of the Israel Society of Ecology and Environmental Sciences, views this as a positive move. “Disposables are a petroleum-based product that encourages a highly polluting industry,” he told Al-Monitor. “They get scattered around in nature, poison the environment and come back to us — whether by sea, which absorbs 8-12 tons of plastic a year — or by infiltrating the food chain and endangering our health. Therefore, imposing a tax on single-use items is a step in the right direction, but we expect to see a total ban on use, at least regarding some single-use dishes for which there are eco-friendly alternatives.”

However, Ilan Hatab, an importer of single-use dishes from central Israel, is up in arms at the initiative. “Disposable dishes are a convenience product, like a car, like a plane and like a refrigerator,” he told Al-Monitor. “This convenience has environmental significance, so do single-use dishes, so what? Is anyone thinking of imposing taxes on flights because of pollution?”

Hatab points to some advantages of disposable dishes. “Single-use dishes prevent a huge waste of water and use of unhealthy cleaning products, some of which coat the dishes and reach our food. It also means employing laborers and migrant workers to wash dishes at low pay. The army also uses disposable dishes these days, saving a lot of money and logistics, and then there are the housewives. It is very easy to rail against single use when you are a single person living alone or with a partner, but for a family with several children, who keep dirtying dishes and where both parents work, this saves the day.”

Indeed, a general impression from the inside indicates that ultra-Orthodox families with many children often use disposable dishes. The Jewish laws that prevent the use on the Sabbath of the dishwasher might be the reason for this pattern of behavior. And now, in the weeks of the High Holidays, both secular and religious Israelis might again exaggerate with the use of disposables — some at home, others in the park or in nature.

Professor Adi Wolfson, an expert on sustainability at the Sami Shamoon College of Engineering, does not deny the convenience offered by disposable dishes, but argues that the only way to stop them is by legislation banning their use. “The real goal is to educate the public that it must wean itself off the use of disposables, despite their great convenience,” he told Al-Monitor. “In some cases, the government must intervene and impose, and there is no case more justified than this. Taxation is a bad solution. In addition to inequality [because only those well-off can afford single-use plastic] it will generate a rebound effect — people will think that the tax has solved the problem. Also from a public standpoint, environmental activity will be perceived as a burden and cause great damage to environmental campaigns.”

Another opponent of taxation and certainly of a ban on single-use plastic is journalist and commentator Hillel Gershuni, who appears to have declared a holy war to refute the arguments of green organizations. “The Finance Ministry is not interested in the environment. It is riding a popular trend and the only green it cares about is the money it will generate,” he told Al-Monitor. Gershuni, too, discounts a series of assumptions cited by environmental activists. "Making a cup from stainless steel or ceramics is far more wasteful in terms of energy use than manufacturing a single-use cup,” he argued. “A study of the issue found that you would need to use a ceramic cup 1,000 times in order to be energy efficient compared to a single-use cup. A similar study of plastic bag use found that in energetic terms their production was hundreds of times less wasteful than that of cotton bags. And no, multi-use bags are not used hundreds of times.”

According to Gershuni, contrary to prevailing claims, the disposable waste filling the oceans is the result of uncontrolled dumping. “90% of the plastic islands in the Pacific Ocean originate from the coast of Asia and from rivers along which millions of people live in Third World countries. They dump their garbage into the rivers and that must be dealt with,” he said. “Chasing after the single-use plate or bag I use is ridiculous. They should, of course, be properly treated and placed in landfills without dirtying the environment, but that is not the problem with the oceans. The stories about animal deaths are also a marginal issue. Marine creatures dying because of plastic bags are a negligible minority. Death from fishing equipment, which constitutes a significant part of ocean waste, is far more prevalent.”

Wolfson rejects Gershuni’s arguments and claims they distort reality. “These studies zoom in on one chapter of the tale — only on the production segment, but there is a whole chain involved,” he noted. “You have to look at an entire life cycle — at the entire production process, the manufacturing of raw material and the implications of plastic waste for the environment. If we look at the full picture, we will see that single-use plastic is far more destructive for the environment.”

“If you ask me about 10 years from now,” Hatab said, “I am afraid the greens will win. These organizations have a tremendous international lobby. They can stop the paving of roads and construction of cities. And who is our lobby? The importers and housewives? We do not have a lobby. They will get to us in the end. Israel imitates Europe in everything and I see what goes on there. I tell my children that the business with which I raised them will not be around for them to raise their children. It will end.”

Public awareness against using plastic disposables is probably one of the great challenges in Israel. Most of us use or consume disposable plastic, such as cheap disposable plastic cleaning products, soft drinks, food packaging and many other products. At least until other, greener options become more accessible.

Even if plastic is here to stay, it is obvious that we can all reduce the use of it. We can make relatively small gestures that would positively impact the world in which we live. In an era where protection of the environment is highly present on the agenda of the international community, Israel, as a technology superpower, cannot stay behind.