Hi-tech rivalry between Abu Dhabi and Riyadh heats up

Saudi Prince Mohammed bin Salman is sparing no effort to lure business from the IT and other sectors in Abu Dhabi to the kingdom. 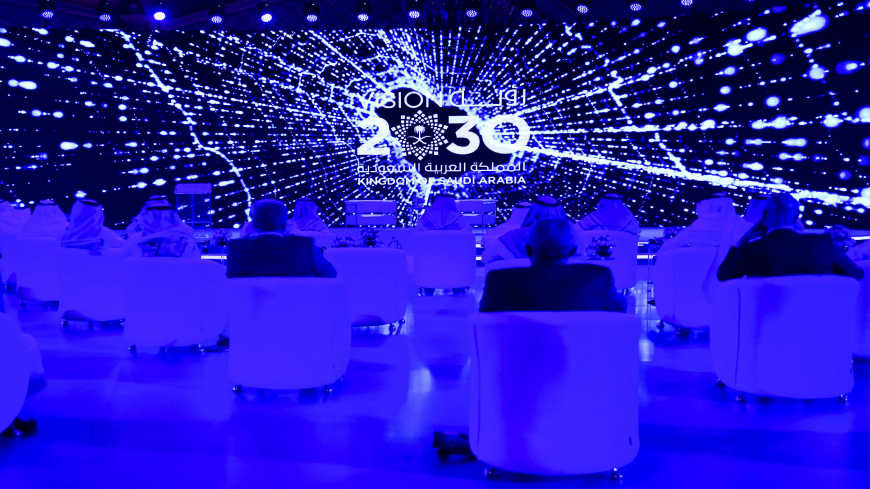 Guests attend the Global AI 2020 (Artificial Intelligence) Summit in the Saudi capital, Riyadh, on Oct. 21, 2020. The summit, organized by the Saudi Data & AI Authority (SDAIA) and G20 Saudi Secretariat as part of The International Conferences Program, brings together stakeholders from the public sector, academia and private sector, including technology companies, investors, entrepreneurs and startups, to shape the future of AO. - FAYEZ NURELDINE/AFP via Getty Images

In an effort to diversity its oil economy along the same pattern as the United Arab Emirates, Saudi Arabia has been developing new economic sectors at home instead of investing abroad. Yet to become a regional economic hub, Riyadh would have to strip away some firms from Dubai, as most of the large international firms operating in the Gulf region are already headquartered in the UAE’s largest city.

Perceived as the destination of choice even for Saudi businesses headed abroad, Dubai is the most thriving financial and commercial center in the Gulf Cooperation Council (GCC) region. Yet a turning point in Saudi Arabia’s approach came when Crown Prince Mohammed bin Salman launched the futuristic city NEOM, which is set to cost an estimated $500 billion.

Being a focal part of the kingdom’s Vision 2030 economic program, this megaproject could become the showstopper of the Saudi economic makeover if it can compete as a business hub with Dubai. Consequently, Riyadh is trying to outstrip Dubai, though both cities could have adopted a complementary role.

Recently, a campaign was started by Riyadh as part of an initiative named Programme HQ, under which blue-chip companies and multinationals from Google to Siemens are being offered incentives to relocate their regional headquarters from Dubai to Riyadh. Ostensibly, this is to lure the senior leadership of top foreign companies to Riyadh to make it look like a larger market than Dubai, as well as to speed up foreign investment.

According to executives familiar with the pitch, Saudi authorities have offered tax breaks, protection against future regulations and a waiving of quotas on the employment of Saudi locals. As the annual investor conference affiliated with the Public Investor Fund (PIF) is scheduled for Jan. 27, nearly all foreign multinationals doing business in Saudi Arabia have been contacted.

Apparently, these companies are to be housed in the King Abdullah Financial District, a large business district of 59 skyscrapers toward the north of Riyadh. However most companies are well-settled in Dubai — they might shift some business units or branches to Riyadh, but the relocation of senior management would take longer. Basically, most multinationals still prefer to be based in Dubai but wish to grab the larger Saudi market as well.

Nevertheless, Google Cloud has agreed with Saudi Aramco to deliver cloud computing services infrastructure, and it could open its first workplace in the kingdom soon. Also, Western Union has invested $200 million for a 15% stake in Saudi Telecom, and a $500 million deal was introduced with Alibaba Cloud by STC for similar services.

But with this Saudi outreach to foreign companies, the rivalry between the two GCC states has gathered speed. Interestingly, Abu Dhabi and Riyadh have done similar things such as going hi-tech, investing in business startups and relaxing conservative social norms to attract tourism.

These are some of the highlights.

For starters, the UAE became the first Arab nation to send a mission to Mars. Having taken off from an island in Japan with US help in July 2020, the $200 million “Hope” spacecraft will reach the Red Planet in February 2021 and produce the first global map of the Martian atmosphere.

According to Omran Sharaf, the mission’s project manager, the Mars mission was designed to cause ”a big shift in the mindset” and encourage research, offer degree programs in basic sciences and engage youth from other Arab states. However, according to Sharaf, the main driver behind it “is not space, it’s economic.”

Soon after, on Jan. 10, 2021, Prince Mohammed launched The Line, an ambitious linear city. Powered by renewable energy, utilizing artificial intelligence and producing zero carbon emissions, it is a long belt stretching from the Red Sea coast inland through the NEOM megaproject in northwest Saudi Arabia.

Under planning for nearly three years, the project cost is estimated at $100 to $200 billion, which will be taken from the $500 billion support fund announced for NEOM within the kingdom’s sovereign wealth PIF fund. Construction will commence in 2021, and the hi-tech city is expected to contribute $48 billion to the Saudi gross domestic product and create 380,000 jobs.

Meanwhile, even where startups are concerned, there has been vigorous competition between the two GCC allies since last year. Providing new opportunities after the pandemic, the UAE announced a special stimulus package to revive the startup ecosystem recently.

Even Saudi Arabia is a thriving market, though local startups struggled hard to survive just five years ago. Nowadays, German entrepreneur Ronny Froehlich observed, “If you want to be big in the Middle East, you need to be in Saudi — full stop.”

In addition, the UAE was the first to focus on offering the most liberal lifestyle available in the GCC. Later on, the kingdom also announced significant changes to encourage tourism, including allowing concerts, sporting events and movie showings, and it even granted women some long-restricted freedoms.

In another first, Abu Dhabi went ahead and allowed foreigners to fully own their businesses and no longer require local partners.

According to Khatija Haque, head of MENA research at Emirates NBD, “The UAE needs to keep pace or stay ahead if it doesn’t want to lose its competitive advantage. When oil was at $100 a barrel for several years, there wasn’t that much need to attract foreign investment. Clearly, that has changed.”

Then the UAE raised the stakes further for other GCC states by letting expat professionals and investors qualify for 10-year residency visas. Consequently, this compelled Saudi Arabia to announce an e-visa program for 49 countries.

However, Riyadh does have some factors working in its favor, and it could still win the race due to its sheer size and larger growth opportunities.

First, having a population of 34 million — three times larger than the UAE’s — the kingdom remains the largest market in the Gulf region. Abu Dhabi’s main drawback could be its limited size and capacity, even though it is efficient and innovative.

Second, the nature of the competition changed with NEOM, as it covers a total of 27,000 square kilometers, almost the equivalent of a small country. Bringing the competition to the next level, The Line has been added with a completely novel concept. In comparison, the UAE mostly has smaller-scale projects to offer.

Third, since easing restrictions on starting companies, enforcing contracts and getting permits, Saudi Arabia was ranked a most-improved country in the World Bank’s Doing Business report for 2020. Yet the kingdom still fell a ways behind its GCC partner in raw numbers, ranking 62nd compared to the UAE at 16.

Therefore, if all goes well with NEOM and The Line, multinational companies could eventually head for Saudi Arabia without needing any encouragement.

Over the last year, some companies have started to base themselves in Saudi Arabia. Noting this change, Tom Watson, a partner at Michael Page Middle East, recently said, “Over the last 18 months, we have seen many high-profile leaders in the real estate sector moving from across the world looking to be involved in the giga-projects.”

The desired exodus is ultimately bound to happen, as the coronavirus pandemic has created “fertile soil” for companies in the kingdom, as Sam Blatteis, former Gulf head of presidency relations for Google who advises tech multinational firms, says that high-tech firms have seemed “eager to increase in Saudi Arabia the previous few weeks.”