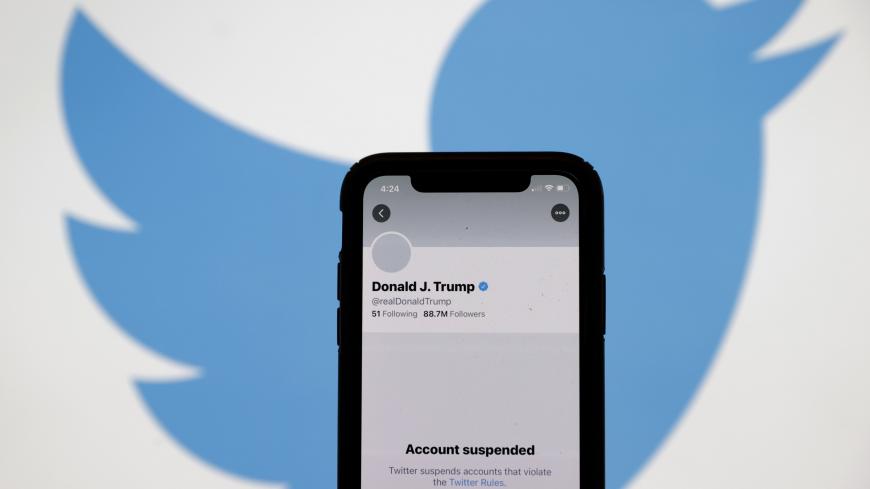 The suspended Twitter account of then President Donald Trump appears on an iPhone screen on Jan. 8, 2021, in San Anselmo, California. Citing the risk of further incitement of violence following a pro-Trump mob's invasion of the US Capitol on Jan. 6, Twitter permanently suspended Trump’s account. Now Twitter is suspending accounts linked to Iran's supreme leader. - (Photo Illustration by Justin Sullivan/Getty Images)

Twitter suspended Friday an account believed to belong to the office of the country's supreme leader, Ayatollah Ali Khamenei. The social media giant has taken action against some Iran-related accounts since permanently suspending Donald Trump from Twitter earlier this month when Trump was still president.

The account, which had the handle @khamenei_site, tweeted a threat against Trump. The tweet was entitled “revenge” and showed a blond man on a golf course resembling the former president. The shadow of a large drone appeared over the green. The text, in Persian, also referenced the “killing of Soleimani.” This refers to the Iranian commander Qasem Soleimani who was killed by a US airstrike ordered by Trump in January 2020.

The account "violated our platform manipulation and spam policy, specifically the creation of fake accounts, and has been permanently suspended,” said the spokesperson.

Twitter did not reply when asked if the account itself was fake. It had 7,888 followers and was not verified. Other accounts bearing the ayatollah’s name have many more followers, though none are verified.

Some of these other Iranian ayatollah accounts have been censored lately. On Jan.  8, Twitter deleted a tweet from the @khamenei_ir account. The account, which has hundreds of thousands of followers, tweeted that COVID-19 vaccines produced in the United States and United Kingdom are “untrustworthy.” It also accused France of donating HIV-contaminated blood to Iran.

Other controversial tweets remain up. In 2018, the same account tweeted, “Israel is a malignant cancerous in the West Asian region that has to be removed and eradicated.”

Last year, Twitter had said that incendiary tweets from the Iranian leader on Israel would not be banned because they amounted to “saber rattling” and are “part of the speech of world leaders in concert with other countries,” Politico reported.

Trump’s recent suspension has led to renewed focus on Twitter’s policy vis-a-vis Khamenei. Trump was permanently suspended Jan. 8 following the storming of the US Capitol by a mob of his supporters. On Jan. 6, Twitter deleted certain tweets from Trump on the incident. In 2020, the Silicon Valley company had already applied labels to tweets of his questioning the validity of the Nov. 3 presidential election.

Some questioned Twitter's seemingly different treatment of Trump’s activity versus the ayatollah’s at the time.

The Twitter spokesperson did not respond to a question asking for clarification on how a world leader can get suspended. Twitter CEO Jack Dorsey explained the Trump ban in a lengthy thread and cited “threats to physical safety."

There are now calls for Twitter to take action against what are considered the ayatollah’s accounts. A Thursday op-ed in The Washington Post by Iranian journalist Masih Alinejad explicitly called for this. Alinejad slammed Khamenei’s use of Twitter while ordinary citizens are prohibited from going on the site, among other things.

Twitter has taken action against other Iran-affiliated accounts recently. The account of Abu Ali al-Askary from the Iran-backed Kataib Hezbollah militia in Iraq was suspended as of Friday. Last week, Askary offered to help “liberation movements” within the United States.

Last year, Twitter suspended accounts from Iran it said were “disrupting the public conversation” surrounding the US election. Twitter received the information on the activity from the US government.