Ankara’s abrupt desire to mend fences with the West appears driven by domestic calculations, but even if its intentions are genuine, it lacks the institutional capacity to pull off such a U-turn. 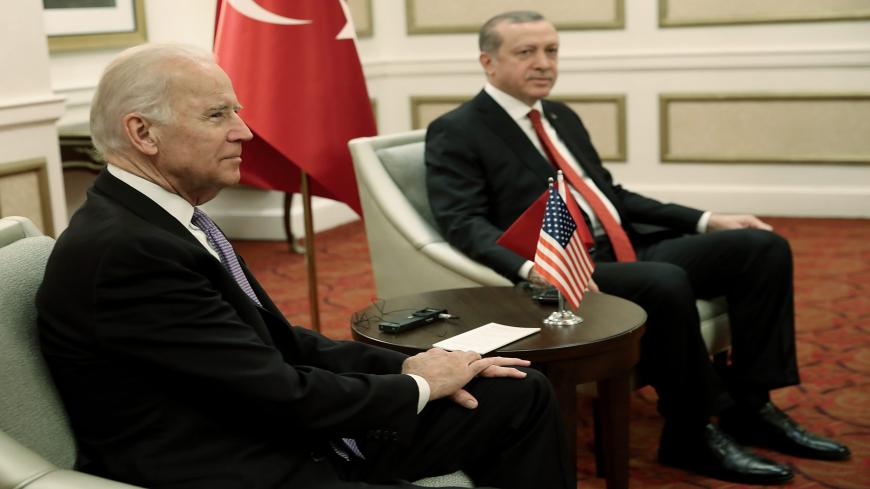 Turkey’s eagerness to revive dialogue with Western partners has markedly increased since November, a month marked by two milestone events for Ankara — Joe Biden’s victory in the US presidential elections and Berat Albayrak’s departure from Turkey’s Treasury and Finance Ministry, which resonated as President Recep Tayyip Erdogan’s acknowledgement that the Turkish economy was on the brink of collapse.

In the most recent manifestation of this effort, a high-profile Turkish delegation resumed long-stalled talks with Greek counterparts Jan. 25 on complex territorial disputes between the two neighbors and fellow NATO members. The talks took place shortly after Foreign Minister Mevlut Cavusoglu met with top European Union officials in Brussels, where he talked enthusiastically about the need to strengthen ties between Turkey and the EU.

The changing mood in Ankara became more pronounced after Jan. 12, when Erdogan hosted EU ambassadors, voicing optimism about Turkey’s ties with the EU and stressing Ankara’s readiness “to put relations back on track.” The pro-government media, which until recently slammed calls for rapprochement with the EU as unpatriotic and even treacherous, is now echoing Ankara’s U-turn, with almost all commentators advocating fence-mending with the EU as soon as possible. Calls for a “new chapter” with both the EU and the United States abound, complete with a friendly rhetoric on NATO. Documents on Turkey’s EU membership bid are being removed from dusty archives and events dedicated to Turkey-EU ties are taking place one after another.

Many observers believe Ankara’s turnabout mirrors Erdogan’s promise for a package of judicial and economic reforms at home, which he is expected to unveil in February. Erdogan’s reform rhetoric has been coupled with back-stepping from gas exploration in disputed waters in the eastern Mediterranean until June in a further effort to thaw ties with the EU.

What is driving Ankara’s effort to realign with the West? Is it a genuine reorientation endeavor or a tactical move to buy time amid the prospect of early elections at home? Given Erdogan’s growing domestic woes, fueled by severe economic turmoil, his turnabout looks more like a tactical move to nourish a favorable climate to bring elections forward from 2023 and minimize the risk of defeat. He seems convinced he has no other option left to ensure his political survival, so much so that he is even braving the resentment of his de facto coalition partner, the Nationalist Movement Party, which is opposed to Ankara’s moderation moves.

Ankara’s expectations from a thaw with the EU are rather obvious — a renewal of the Turkey-EU deal on illegal migration, coupled perhaps with visa facilities for Turkish citizens, and a boost to Turkey’s international image through renewed appearances in EU gatherings. Such a period of respite, Erdogan hopes, will appease growing popular frustration with his government at home and foster optimism among economic actors that things are back on track until he successfully weathers the elections.

The EU’s expectations from Turkey are obvious as well. Easing tensions with Ankara would pave the way for the resumption of high-level political dialogue, including negotiations on updating the customs union and illegal migration accords between the two sides. The EU’s immediate objective is de-escalation in the eastern Mediterranean to prevent a possible flare-up between Turkey and EU members Greece, Cyprus or France.

Few entertain hope that Turkey’s EU membership talks could be revived, given Ankara’s big regress in terms of democracy, human rights and the rule of law. The diminished expectations in Western capitals are, in fact, perfectly convenient for Erdogan, who seeks to reduce relations to a transactional level.

As for Ankara’s relationship with the Biden administration, any prospect of rapport depends on negotiations. Unlike the lenient treatment that Ankara enjoyed under former President Donald Trump, the Biden White House appears determined to follow through with sanctions against Turkey over its purchase of the Russian S-400 air defense systems. The EU’s decision to coordinate actions against Turkey with Washington makes things even harder for Ankara.

A Jan. 28 phone conversation between US National Security Advisor Jake Sullivan and EU Commission head Ursula von der Leyen was a manifestation of these coordination efforts. The two officials “agreed to work together on issues of mutual concern, including China and Turkey,” according to a readout released by the White House.

Ominously, Biden has had a phone call even with Russian President Vladimir Putin since his inauguration, but has yet to speak to Erdogan, who congratulated him on his election victory Nov. 10.

Erdogan’s government lacks not only a genuine intention to improve its ties with the EU, the United States and NATO, but also the institutional capacity to do so. It is an open secret in Ankara that the Foreign Ministry has been sidelined from decision-making on foreign policy issues and reduced to a mere implementer of decisions shaped by Erdogan and his circle of aides and confidants. As a result, decision-making has become highly personalized, often falling into the trap of short termism. Recently retired diplomats recount how the government has trivialized diplomatic experience and eroded deep-rooted Foreign Ministry norms on appointments and promotions. No wonder, partisanship is becoming increasingly visible in Foreign Ministry ranks. Moreover, the president’s spokespeople and communication office as well as the Defense Ministry have become more voluble on foreign policy matters, causing confusion in Turkey’s messaging on its strategic choices and objectives.

In sum, the core motivation behind Ankara’s pro-Western overtures appears to be domestic and election-related. On the one hand, Erdogan is dismissing mounting calls for early elections, but on the other, he is trying to gain as much breathing room as possible to put together the most convenient conditions for his reelection. Whether Erdogan’s U-turn and reform pledges could give him the breathing room he needs is a question that Western capitals should ponder the most.