A French company has beaten out a Turkish one for the Mosul airport project; political considerations along with economic concerns seem to have factored into Baghdad's decision. 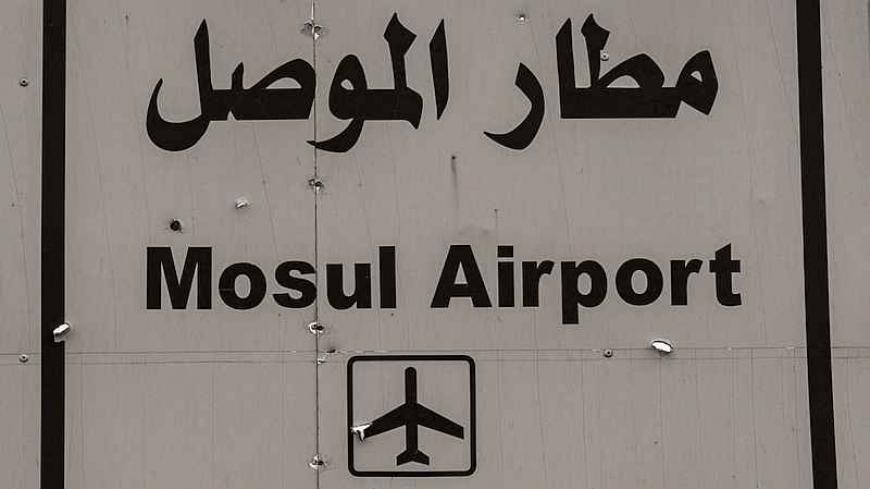 A bullet-riddled sign for the Mosul airport is seen during fighting against the Islamic State in west Mosul on April 12, 2017, in Mosul, Iraq. - Carl Court/Getty Images

Turkey has lost a major construction bid in Mosul to the French, the latest curveball France has thrown Turkey in the two countries’ struggle for influence in the Middle East and North Africa region.

Iraq has come to a preliminary agreement with a French company for the renovation of Mosul International Airport, a project Turkey has been eagerly eyeing since 2019 as part of its ambitious plans to be heavily involved in the reconstruction of Iraq following the 2014 Islamic State takeover. The central Iraqi government authorized the Iraqi Civil Aviation Authority to negotiate and sign a deal for the reconstruction of the airport with France’s Aeroports de Paris Ingenierie on Dec. 27.

The announcement of the bad news for Turkey came from the Turkish ambassador to Baghdad, who had been lobbying on behalf of the Turkish companies. “Turkish contractors made attractive offers to renovate and operate the Mosul Airport through direct investment,” Fatih Yildiz wrote on Twitter on Jan. 8. “Apparently, someone else will do this project.”

The timing of the Iraqi government’s decision was telling as it came only days after Iraqi Prime Minister Mustafa al-Kadhimi’s Dec. 17 visit to Ankara during which the Iraqi premier emphasized bilateral cooperation between the two neighbors. Sources told Al-Monitor on condition of anonymity that Kadhimi has given no guarantees on the airport matter in his meeting with Turkish President Recep Tayyip Erdogan.

Turkey’s expectations for a win were high as Baghdad welcomed the offer in 2019 when Turkey’s ambassador to Iraq conveyed the Turkish proposal to his Iraqi counterparts. Iraq’s then secretary-general of the Council of Ministers, Hamid al-Ghazi, said back then that Turkey was planning to renovate the airport under “a special investment model.” Yet Aeroports de Paris Ingenierie’s decade-old experience in the Iraqi aviation scene and political milieu seem to have outdone the Turkish offer.

Aeroports de Paris Ingenierie has undertaken several projects in Iraq since 2010, including renovation of the Baghdad, Basra and Mosul airports and construction of the Dahuk airport. It also joined forces with a British company for the design of the Middle Euphrates airport some 40 kilometers (25 miles) northwest of Najaf.

According to a former Iraqi government official familiar with the decision-making process, several reasons factored into the French success. The French company, which has focused on the project for some four years — long before the Turkish offer — joined forces with a local partner that has a clout in the Iraqi government circles. Aside from lacking a local partner, the Turkish offer was based on the build-operate-transfer model, whereas the French firm has only been interested in the construction part, the source said.

The appealing aspect of the Turkish plan was its financing. Turkey was planning to finance the project through a $5 billion loan Turkey pledged for the reconstruction of Iraq during a donors' conference in 2018. But Aeroports de Paris Ingenierie came up with its own financial solution through a French government loan, the details of which are not yet clear.

“Turkey usually uses diplomatic and political channels for these sorts of projects, but that’s not how things are working in Iraq,” the source said. “Turkish companies are not powerful on the ground. The ones that win are the ones that have local partners.”

The source said political differences between Ankara and Baghdad played no role in the decision, stressing that Kadhimi is more willing to work with Turkey than his predecessors.

Yet some observers said they believe that ignoring the political aspect in the Iraqi government’s decision would only tell a half-truth as Turkey’s nostalgic approach to Mosul — a former Ottoman territory that many Turks still see as a homeland taken away unfairly — has long been a source of irritation for many Iraqis.

An Iraqi expert who worked as a consultant for several Iraqi firms until the Islamic State takeover in 2014 said Turkey’s ideological approach has been a major factor in Turkey’s being left out of the running. “Turkey has a great potential to do business in Iraq. In fact, this potential still remains intact,” the expert told Al-Monitor. “But the [Turkish] government has adopted a very ideological approach, and lost. The airport project is the latest example of this.”

Furthermore, the Turkish company seeking the project, Kurk Construction, which mainly operates in Iraqi Kurdistan, lacked experience when it came to airports. To prop up its chances, the company joined forces with another Turkish company, Kalyon, a favorite of Turkey’s ruling party and one of the three partners that were awarded the construction and operation of the new Istanbul airport. Yet the consortium’s proposed build-operate-transfer model was also risky to afford for the Iraqi side, sources who have knowledge on the matter said.

Under the Turkish plan, construction costs for reconstruction of the runway and the main terminal were estimated at $100 million, with $200 million more for a second runway and a cargo terminal. In return, Turkey set two conditions. One was for Iraqi authorities to maintain the security of the airport. The other was for a guarantee of 50,000 passengers monthly under a 20-year contract. Iraqi government was to pay for the loss by itself should the number of monthly passengers below this figure. Although Ankara tried to assure the Iraqi government that this wouldn't happen given the international flights to and from major Turkish airports, Baghdad did not want to take the risk.

Moreover, some in Iraq saw the Turkish eagerness for the Mosul airport project as part of Ankara's broader agenda to increase its influence over Iraq. Turkey, the biggest donor with its $5 billion loan pledge at the 2018 conference, was planning to play a major role in Iraq’s reconstruction process through several projects such as renovation of the Mosul and Kirkuk airports, a second crossing between the two countries through Ninevah province (where Mosul is the capital), a 570-kilometer-long (355-mile) railroad line linking this crossing to Mosul and Baghdad and the modernization of irrigation infrastructure. The man who was Iraq's prime minister then, Haider al-Abadi, was also on board with many of these proposals. Yet none of these plans were realized due to most countries’ failure to deliver on their loan promises and the political instability that engulfed Baghdad.

There are chronic disagreements between the two capitals such as water-sharing issues and Ankara's overt support to Iraqi Sunnis. Further raising eyebrows in Baghdad were Turkey's refusal to withdraw its military forces from the Bashiqa air base near Mosul and the expansion of Turkish military operations against Kurdish militants in northern Iraq to target Kurdistan Workers Party bases in Sinjar and Makhmour in Ninevah.

Furthermore, Ankara is seeking to turn Mosul and Ninevah into a regional hub to link the two countries by land and air and with oil pipelines. Turkey’s proposal to open a second border crossing through Ninevah aims to set up an alternative trade route between Turkey and Iraq, bypassing the Kurdistan Regional Government. Kadhimi, in turn, is trying to avoid any steps that would hamper the interest of the Kurdistan Regional Government at a time when he is trying to mend ties between Erbil and Baghdad. Turkey’s second border crossing plan is also aimed at setting up a buffer zone between Syria’s regions controlled by the Kurdish groups and the PKK militants based in northern Iraq.

Turkey, meanwhile, believes that the French government has been influential in the Iraqi officials' decision to give the project to a French firm as part of France’s efforts to expand the power struggle between Ankara and Paris to Iraq. The Turkish side has reportedly conveyed these concerns to the Iraqis, but the decision on the airport project indicates that the adverse impact of Turkey’s regional policies, along with Iraq's own economic interests, played a role in preventing Turkey from winning the airport bid.