Iranian forces are concerned about losing their influence and their members in Syria’s Deir ez-Zor province in favor of the formations supported by Russia. 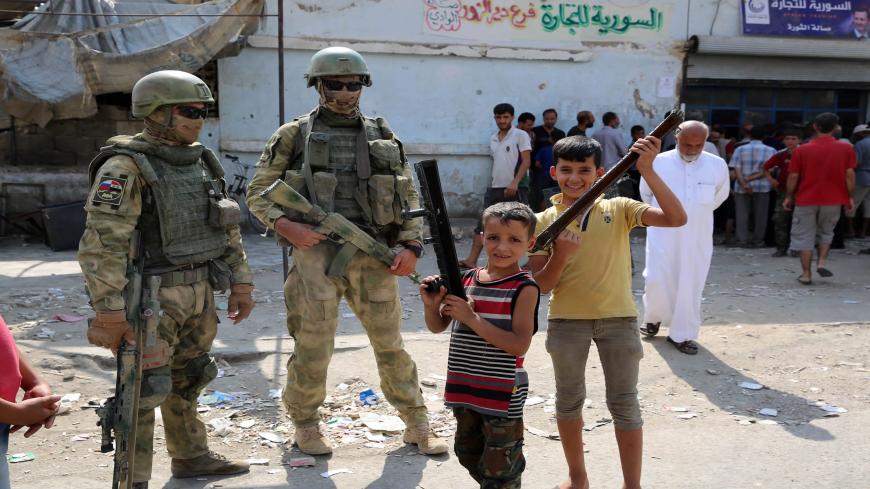 A picture taken during a press tour provided by the Russian armed forces shows Russian soldiers standing guard in a central street in the eastern city of Deir ez-Zor, as local children pose nearby, Syria, Sept. 15, 2017. - Dominique Derda/AFP via Getty Images

ALEPPO, Syria — Iranian forces and their allied militias in Deir ez-Zor province in eastern Syria have recently carried out new redeployment and repositioning operations to limit their losses in the event of Israeli airstrikes against their sites in the area. Their action included moving to new military sites and headquarters, hiding weapons and removing flags from the roofs of military sites and barracks as well as relying more on local members to guard military sites. Some armed formations also partially withdrew from their sites, while the families of members were transferred to other areas.

The biggest challenge facing the Iranian forces now is to maintain their cohesion in Deir ez-Zor and its countryside, as the violent suspected Israeli bombing that targeted their sites on Jan. 13 has pushed many members to flee their headquarters and military sites. This prompted the Iranian forces to intensify patrols in search of defectors - primarily Syrian nationals who had been working with the Iranian-backed groups - and arrest local members who did not join the military barracks after the airstrikes ended.

Meanwhile, other members were accused of helping a group of officers to defect. What most worries the Iranian forces in Deir ez-Zor seems to be the increasing flow of defectors toward armed formations supported by Russia in the area, most notably the Fifth Corps, which officially announced its establishment on Nov. 22, 2016.

Firas Allawi, journalist and editor-in-chief of Alsharq News Network, which monitors news in Deir ez-Zor and eastern Syria, told Al-Monitor, “Dozens of members of the Iranian formations from Deir ez-Zor province left their sites after the Jan. 13 airstrikes, many of whom have chosen to join the Fifth Corps.”

Allawi added, “The Iranian forces are intensifying patrols in search of defectors across Deir ez-Zor province to limit [defections] that worry the leadership of the Iranian forces and directly affect its influence. They have already arrested dozens of fleeing operatives and some of them have been charged with inciting their colleagues to leave the ranks of the Iranian formations.”

It seems that Russia will benefit from the presumed weakness that the Iranian forces are experiencing in Deir ez-Zor. The Russian-backed Fifth Corps seems to have become the go-to faction for these defectors. This may be an opportunity for Russia to expand at the expense of the Iranian forces in the strategic Deir ez-Zor province.

The province is particularly important for Russia due to its proximity to the border with Iraq and its vast underground wealth, including oil.

It seems that Russia had already started taking steps to expand its influence in Deir ez-Zor at the end of 2020, i.e., before the Jan. 13 airstrikes against Iranian positions in the province.

Allawi noted, “More airstrikes against the Iranian forces in Deir ez-Zor may weaken them and lead to their collapse because many of their local members will defect since they are not willing to die in their headquarters defending Iran. Their [the members’] best option to get protection and money is the Fifth Corps.”

Sheikh Rami al-Doush, a member of the National Coalition for Syrian Revolutionary and Opposition Forces, who is from Deir ez-Zor, told Al-Monitor over the phone, “The Iranian forces and their affiliated militias in Deir ez-Zor province feel a threat that menaces their presence and influence due to the recent targeting of their sites, as well as Russia's competitive [moves] toward them.”

Political science researcher Mohammed Adeeb, who lives in the countryside of Aleppo, told Al-Monitor, “The Iranian-Russian competition in Deir ez-Zor is constantly escalating, and it is natural for Russia to take advantage of the state of weakness that Iranian forces are going through in the area after being directly targeted. Russia has also benefited from the alienation and fear of the Iranian forces and their militias among the popular circles there, which are afraid of cooperating with them or allowing their sons to join their ranks, as the popular circles in Deir ez-Zor prefer Russia over the Iranian forces.”

Bilal Sattouf, a political science researcher from the countryside of Aleppo, told Al-Monitor, “The Russian-Iranian relationship in Syria is based on competition, not conflict, and this competition is focused on attracting recruits as the two parties share overlapping areas of influence. Both sides employ several tools in managing this competition, and Russia may exploit the Israeli attacks on Iranian militias in eastern Syria to attract militia members, without this indicating a Russian desire to completely remove Iranian influence from eastern Syria. Russia is indeed trying to preserve the Iranian presence, but only in a way that serves its interests and policies. So I believe that this Russian-Iranian polarization in eastern Syria will not imply a conflict between the two sides.”

Obadah al-Tamer, deputy dean of the Faculty of Political Sciences at the International Sham University in the countryside of Aleppo, told Al-Monitor, “Russia may wish to compete with Iran over some of its influence in Syria for its own interests or for reasons related to the [policies] of the new US administration. During the meetings between [former US Secretary of State John Kerry and Russian Foreign Minister Sergey Lavrov] in 2016, Russia was given the green light [to expand its actions] in Syria, with US consent. This meeting was followed by a series of events aiming to balance the Russian role in Syria. If the Joe Biden administration adopts that same vision, Russia might try to limit the Iranian role in Syria. However, Iran may try to exploit the negotiation process over the nuclear issue to achieve gains in Syria, especially in central and eastern Syria.”